six players to watch for 2010 capitals 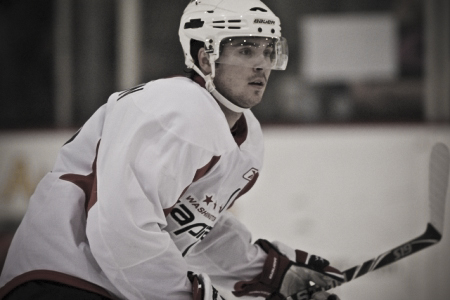 This weekend, the Washington Capitals will once again begin their quest for the franchise’s first-ever Stanley Cup victory.

And yes, the pain from last season’s stunning opening-round loss at the hands of eighth-seeded Montreal is still very fresh in the minds of many Caps fans. But trust me when I say the Capitals organization has moved on and is only looking forward.

The high-flying Capitals offense set record after record during the regular season, even capturing the first Presidents’ Trophy in franchise history, but couldn’t put the puck in the net in the playoffs. And somehow, for the third-consecutive season, the Capitals lost a Game 7 at home, in front of a sellout crowd at the Verizon Center.

Many front offices would have been tempted to retool the roster after witnessing such a disastrous collapse, but general manager George McPhee remained convinced that the pieces are already in place.

Critics continue to say that the Caps need to upgrade at center, defense and goalie, but McPhee firmly believes a handful of youngsters from within are more than capable of stepping up and filling the void.

Casual fans already know the names of the “Young Guns” – Alex Ovechkin, Nicklas Backstrom, Alexander Semin and Mike Green. But, if McPhee is to be believed, the next wave of young talent is here to stay.

If the Capitals are going to get over the proverbial hump this season and make that elusive playoff run, then these six homegrown players are likely going to play a vital role.

With the 24th pick in the 2009 NHL draft, the Capitals selected Marcus Johansson, a smooth-skating Swedish center. Although he’s barely old enough to shave (he turns 20 tomorrow), Washington believes they found a gem in Johansson.

During the Caps Convention this past weekend, the always-candid Bruce Boudreau even compared Johansson to Backstrom, the team’s other Swedish center, who Boudreau said just might be the best all-around player in the entire NHL.

Johansson has speed, he’s smart and he’s defensive minded, which could earn him solid minutes on the penalty kill. A lot of 19-year-olds get their first glimpse of NHL action and wilt under the pressure. But Johansson has continued to play well and look the part so far this preseason.

Even if he’s not a mainstay on the roster this season, by all accounts he’s going to be around for a while once he does earn his way into the rotation. Backstrom is the top-line center for good reason, but there appears to be an opportunity for a youngster like Johansson to lock down the second or third line center role.

While Johansson came to Washington as a highly-regarded first-round pick, his main competition at center is a guy who had to face much stiffer odds. Perreault is also a Capitals draft pick, but his name wasn’t called until the sixth-round (177th overall) in the 2006 draft.

Over the last two seasons with the Hershey Bears, Perreault has registered 27 goals and 73 assists for 100 points in 133 regular-season games. In his limited time with the Capitals last season, Perreault picked up four goals and five assists for nine points in 21 games.

“He’s a really skilled forward and he’s really quick,” said Hershey teammate Keith Aucoin of Perreault. “I haven’t seen a defense yet who is able to hold him off down low. He’s so quick and wiry, and he sees the ice as well as any player I’ve ever played with. He’s also a really solid passer. At times, he reminds me of me a little bit, back when I was younger. I may have lost a couple steps since then, but he reminds me a little bit of me back when I was younger. He’s a really great player though and he’s got a really bright future ahead of him.”

Perreault will start the season in Hershey, but it’s a safe bet that he’ll see time in Washington again in the not-too-distant future.