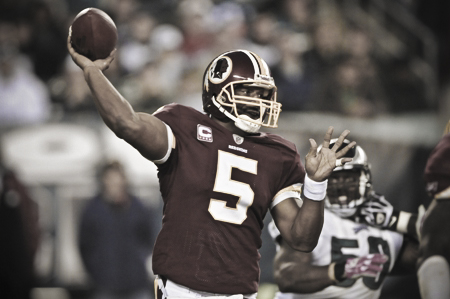 It goes without saying that all eyes were on quarterback Donovan McNabb as the Washington Redskins traveled to Philadelphia to take on the Eagles Sunday.

Since 1999, McNabb had been the face of the Philadelphia franchise, so the country was interested to see how he would fare against the Eagles and what kind of reception the Philly faithful would give him.

Leading up to the highly-anticipated NFC East matchup there was little reason to believe that Eagles fans would do anything other than what they’ve always done – boo the hell out of whoever is in front of them. It’s what they’re known for, so why change now?

So it was fairly surprising and completely classy when McNabb was greeted with a heartfelt standing ovation McNabb by the sold out crowd at Lincoln Financial Field.

Sure, they ripped into him as soon as the game began, but it must have been a special moment for the 33-year-old quarterback who owns every conceivable quarterback record in Philadelphia’s franchise history.

The Redskins got off to a fast start, built 17-3 lead on the road against a heated rival and then held on for a 17-12 victory to improve to 2-2 on the season and 2-0 in the division.

But that brief moment when Philly fans surprised the rest of the football-loving world, followed by an amazing first quarter by the Redskins, will surely be remembered by McNabb for the foreseeable future.

2. “Ready To Start” by Arcade Fire

Think about how awful the Redskins looked during the opening frame against the St. Louis Rams Week 3. The opening kickoff went out of bounds to give quarterback Sam Bradford and friends ideal field position, and then the Redskins defense forgot how to tackle running back Stephen Jackson, who broke off a 42-yard touchdown run.

Redskins receiver Santana Moss then turns the ball over and Bradford connects on a three-yard touchdown pass to someone allegedly named Daniel Fells for an improbable 14-0 lead. Even though the Redskins battled back and even briefly took the lead before losing 30-16, the first 15 minutes set the tone for the entire game and gave a team that had only won once in the previous 28 games new life.

Well, after the first quarter of the Redskins-Eagles game, I turned to a friend on the sideline and said, “I now know what it felt like to be a Rams fan a week ago.”

Instead of screwing up the opening kickoff, the Washington special teams unit actually found a way to contribute for the first time this season. The speedy Brandon Banks, who was signed to the 53-man roster roughly 24 hours before kickoff, returned the Eagles’ first punt of the day 53 yards to give the Redskins ideal field position for their opening drive.

Then, the combination of Clinton Portis and Ryan Torain at running back did the rest, with Torain punching it in from 12-yard out to take an early 7-0 lead. On the ensuing play, linebacker Lorenzo Alexander absolutely annihilated Eagles cornerback Jorrick Calvin and Philadelphia was unable once again to generate any offense on their next possession.

The Redskins got the ball back and McNabb led the Redskins offense on a nine-play, 78-yard drive that was capped by a 31-yard touchdown strike from McNabb to tight end Chris Cooley.

For the second week in a row, the underdog was up 14-0 after the first quarter. Unlike last week, the Redskins actually looked like a team playing with a purpose. And most importantly, the hometown crowd was absolutely taken out of the game.

So as bad as the Redskins looked at the start of the Rams game, they more than made up for it a week later in Philly – largely because the special teams guys stepped up and finally contributed something positive.

It’s also worth noting that Banks and Torain are both players who have already been cut by Washington this season, and yet, their strong play directly led to the opening score. There aren’t many young players on the current roster, but these two kids will hopefully be around to contribute for the rest of the season.

Although I mentioned them earlier, the dynamic duo of Portis and Torain warrants some additional praise. In the first game of the season, the Redskins lost the time of possession battle to Dallas by eight minutes. The same held true a week later against Houston. The Rams held the ball for just a hair under 10 minutes more than the Redskins.

In those three games, the Redskins rushed 57 times for 223 yards (3.9 yards per carry). Against the Eagles, the Redskins finished the day with 35 carries for 169 yards (4.8 per attempt). The Redskins still lost the time of possession battle (Philadelphia held the ball for nearly six minutes more than Washington), but the impact of the ground game was still felt by the rest of the Redskins roster.

With Portis and Torain running downhill against an aggressive Eagles defense, McNabb wasn’t asked to do all of the heavy lifting. That’s important because Moss was a nonfactor, which meant Cooley was the only reliable target. Anthony Armstrong had a beautiful 57-yard reception, but the ineffective duo of Joey Galloway and Roydell Williams finished the day with just one catch for five yards.

And most importantly, the Redskins defense wasn’t on the field all day long. The defense was fresh, and as a result, guys were flying around the field and delivering punishing blows. Mike Vick was knocked out of the game with a rib cartilage injury after being sandwiched between safety Kareem Moore and cornerback DeAngelo Hall. LeSean McCoy, Philly’s best player on Sunday, suffered a broken rib in the first half.

Because they weren’t on the field for 80 plays, the Redskins defense erased Vick, the Eagles’ most dynamic threat, and rendered receiver DeSean Jackson, who has tormented the Redskins since he came into the league, useless. And while McCoy looked good in the first half, he wasn’t nearly as elusive once he had to deal with a broken rib or two.

When the Redskins running game is going, it takes the pressure off of everyone else in the lineup. On Sunday, Portis (11 carries for 55 yards) and Torain (18 carries for 70 yards and a touchdown) came up big for the burgundy and gold.

When the Eagles made the controversial decision to dump McNabb, they did so because they felt that his successor, Kevin Kolb, was ready to run the offense. Head coach Andy Reid ultimately made the call to dump McNabb in favor of Kolb, and inexplicably agreed to trade him within the division.

So when the schedule came out, it was safe to assume both McNabb and Kolb circled this date on their respective calendars. Of course, Kolb didn’t make it 60 minutes into the season before a concussion sidelined him in Week 1. And if we’re being honest, he didn’t exactly inspire confidence in the one half of action he saw – going just five of 10 for 24 yards against Green Bay.

Well, once Vick’s day was over, Kolb was thrust back into action. And while his numbers weren’t terrible – completing 22 of 35 attempts for 201 yards with one touchdown and one interception – Kolb certainly didn’t win over any new fans on Sunday.

If I’m being completely honest, I didn’t think for a second that Kolb would be able to drive 74 yards in roughly 60 seconds to capture victory for the home team. If Vick was the guy standing behind center it’d be one thing, but Kolb simply doesn’t possess the same skill set as Vick.

Honestly, Kolb reminded me of former Redskins quarterback Jason Campbell. He was solid, but never spectacular. He rarely challenged the opposing defense downfield, instead preferring to dump the ball off to tight ends and running backs (McCoy alone was targeted 15 times against Washington). He wasn’t going to lose the game for Philadelphia, but he wasn’t capable of putting the rest of the team on his back and single-handedly winning it either.

Down the road Kolb develop into the franchise quarterback Reid and friends envisioned. But on this day, he wasn’t good enough to get the job done. And, oh by the way, Philadelphia isn’t exactly the most patient and tolerant place on the planet. So for Kolb’s sake, he better get it together sooner rather than later.

In wins over Dallas and Philadelphia, the Redskins allowed a combined 19 points. In losses to Houston and St. Louis, Washington gave up 30 points per game. Bend but don’t break and keep the opposition out of the end zone, sounds simple, right?

Well, sometimes it really can be that easy. Here’s what I can say about the Redskins defense so far – coordinator Jim Haslett’s aggressive 3-4 scheme has made it virtually impossible for teams to take shots deep downfield. With the exception of a desperation bomb on fourth-and-10 from quarterback Matt Schaub to wide out Andre Johnson in the Texans game, teams have resigned themselves to dinking and dunking against the Redskins.

Three-step drops, screens and misdirection plays are apparently the blueprint for attacking Washington’s defense, if the last three weeks worth of action is to be believed. Offenses are sacrificing the aerial attacks that torched the Redskins a season ago. Instead, quarterbacks are checking down and settling for short-range passes to the closest possible targets.

The question then becomes – will the first Redskins defender make the tackle or not. As a defender, you want the play to develop in front of you. it’s a helluva lot better than trying to run down a receiver with a 15-yard head start.

And on some plays – like the 42-yard touchdown run by Jackson in St. Louis, multiple defenders get a hand on the ball carrier, but fail to bring him down. On other plays, the first defender on the scene is able to take him down or at least slow him down until help arrives.

Sure tackling is a must, and as long as the Redskins defenders are keeping the play in front of them they should be in good shape. And if the running game is clicking and the defense is limiting what opposing offenses are able to do, then the Redskins will have more than a fair chance at victory week in and week out.