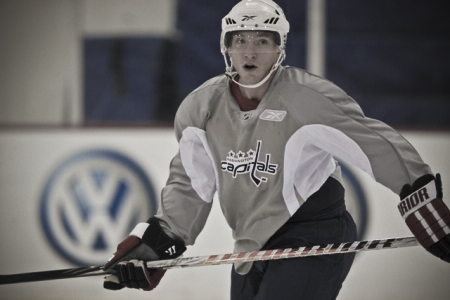 Although he’ll turn 32 this November, Aucoin has yet to play a full season’s worth of games at the NHL level (he’s played in 74 total games since 2005-06). He’s been called up to the Capitals for just 20 games over the last two seasons. And he can’t help but be realistic when he sees the names of highly-touted prospects like Marcus Johansson and Mathieu Perreault next to his on the team’s depth chart.

But don’t expect Aucoin to quit without a fight. Generously listed at 5-foot-9 and 187 lbs., Aucoin has always been somewhat of an underdog. Other players might look like a prototypical hockey player, but the Waltham, Mass., native is never going to be outworked or out-hustled on the ice. Even if he starts the season back in the minors, he’s not going to let it affect his game.

And with a mindset like that, it’s impossible not to root for a guy like Aucoin. We caught up with him earlier this week, before he was assigned to the Hershey Bears, to get his take.

“I’m here at camp, where I see an opportunity at center, and I’m battling a couple young guys who have a good chance at making it,” he said. “But I’m coming in with the mindset to work hard and show them what I can do. They’ve seen it from me in the past. I’ve just got to go out there, work hard and hope they like what I can do. I’m just hoping for a chance.”

Coming into training camp, what, if anything, have the coaches said to you about the competition at center?

“They don’t tell you much,” admitted Aucoin. “They tell you there’s an opening at one of the center spots and it’s up for grabs between three or four guys, but that’s about it. You’ve just got to go out there and work hard. If you worry about it, it’s going to affect your play. You just can’t worry about it. You just go out there, show people what you’re capable of and hopefully put up some numbers. If you do all that, then hopefully they like you enough to keep you around. I feel like I can help this team out, so hopefully I earn that chance.”

The Hershey Bears have won back-to-back Calder Cups in the AHL and you’ve posted 60 goals and 142 assists for 202 points over the last two regular seasons. How do you not stop for a minute and say, “What the hell do I have to do to prove once and for all that I can play hockey?”

“It’s definitely something that comes across your mind from time to time,” he said. “Over the last couple years, you put up decent numbers here in the nine or 10 games that you get and, at times, it gets frustrating. You know, I’ve been through it most of my career – being called up and sent down. I try to not let it get to me, because when I do think about it too much, it gets into my game and I don’t play as well.

“When you do get sent down, you’re going to a great organization,” Aucoin said. “You know it’s a team that’s going to win and it’s a great group of guys, so that does make it easier.”

If that does happen and you’re sent back down to Hershey to start the season, then how are you going to handle that?

“Like I said, it’s happened before,” he said. “It’s going to be a newer group down there, so it’s going to be a little different and it’ll be a challenge to get that new group of guys playing together at that highest level again. It’s always a challenge every time you go back down there, but I’m not going to change anything with my mindset or my game if I do get sent down. I’ll just work hard, put up numbers and be ready, if they need to bring up a guy later in the season.”

The one thing working in your favor is Caps general manager George McPhee basically opted to sit out free agency. He’s on the record as saying he believes there’s enough depth in the organization that he didn’t need to go out and spend a bunch of money on a veteran center or whatever. On that level, it’s got to feel pretty good to at least be given a shot, right?

“Yeah, definitely,” Aucoin said. “It makes you feel good knowing they feel like they’ve already got the guys in place who can get the job done. A guy like Mathieu Perreault is a great player and he’s gotten even better the last couple years at Hershey, and it’s been nice to see him improve. He’s a good friend of mine and hopefully he gets a chance as well.

“In cases like that, you’re battling against your friends,” he continued. “When you get sent down, the only way you’re going to get back up is to put everything else aside and play well. They’re giving us this opportunity and the rest is on us.”

There’s definitely some buzz around Mathieu Perreault this offseason. What does he bring to the table and what do you see from him out there on the ice?

“He’s a really skilled forward and he’s really quick,” Aucoin said. “I haven’t seen a defense yet who is able to hold him off down low. He’s so quick and wiry, and he sees the ice as well as any player I’ve ever played with. He’s also a really solid passer. At times, he reminds me of me a little bit, back when I was younger. I may have lost a couple steps since then, but he reminds me a little bit of me back when I was younger. He’s a really great player though and he’s got a really bright future ahead of him.”

Okay, let’s say you’re lined up on one side of the rink and Perreault is on the other. We drop the puck at center ice and first goal wins. Which one of you guys is earning bragging rights?

In the interest of fairness, I also asked Perreault for his take on a one-on-one match-up against Aucoin. He declined to pick a winner, but he did offer the following assessment.

“I think it would be a really good battle,” Perreault said. “We’re both not really shooters, so one-on-one it would be a lot of puck protection and working with the puck. I don’t think there would be much scoring.”

If nothing else, with a little luck, we can turn this into an entertaining competition one day after practice down the road. And if Aucoin and Perreault have their way, we won’t have to rush to make it happen during training camp. They’ll be reunited in Washington eventually and can settle this battle on the rink.