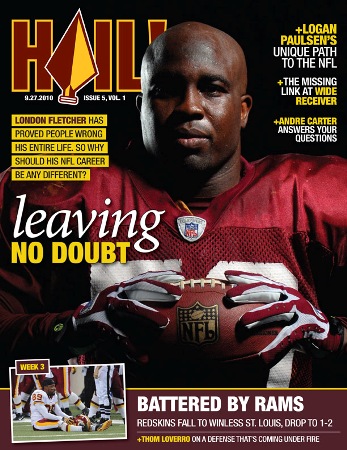 [As you can see, the fifth issue of Hail! magazine, our free digital publication dedicated to the burgundy and gold is now out. Here is a sneak peak of the main feature, written by David Elfin, in this week’s issue — an in-depth look at Redskins middle linebacker London Fletcher.]

After starting at middle linebacker for mostly successful 4-3 defenses for 11 seasons, London Fletcher could have been angry when his Washington Redskins switched to a 3-4 scheme this winter. But moving to an inside linebacker is nothing compared to what the 35-year-old Cleveland native experienced before he made the NFL as a rookie free agent with theSt. Louis Rams in 1998.

Before he turned 13, Fletcher’s older sister had been raped and murdered, his grandmother had died in his arms and his brother had embarked on a lifetime behind bars. But Fletcher didn’t pick up a gun or a knife. He picked up a basketball and a football.

If he was going to settle scores, that would happen on the court or the field not on the drug-infested streets. That “turn the other cheek” response is derived from Fletcher’s upbeat nature, his religious faith and from a love of competition and sports.

“I looked at the choices that my sister made and decided I wanted to do something different, something to bring a smile to my mom’s face because I knew how hurt she was,” Fletcher said. “I saw the consequences of [my brother’s] choices when I was young and knew I didn’t want to go that route.”

Sports were his route out of the ghetto and to fame and fortune, but Fletcher hasn’t forgotten his roots. He was one of three finalists in January for the Walter Payton Man of the Year Award, given to the NFL player who best combines excellence on the field and in community service.

“I’ve always been driven,” Fletcher said. “Those situations in my family added fuel to the fire that was already there. There was a toughness built into you from an early age in my neighborhood. We used to play tackle football on the concrete. You weren’t going to get a lot of babying at home either. If you were crying, you wouldn’t get a lot of hugging. You’d get, ‘When are you going to stop all that crying?'”

Nor did Fletcher cry over being, shall we say, vertically challenged, even though basketball, not football, was his passion as a youngster and a teenager.

“London excelled at football, but he loved basketball,” said Tim Isaac, who mentored Fletcher at the neighborhood recreation center. “Not only was he a very good player, basketball gave him an outlet for what was going on in his life. He could shoot around and get some solitude.”

Fletcher might have needed solitude at times, but he was always a leader. It’s easy to see the point guard who earned a basketball scholarship to St. Francis (Pa.) – before transferring home to play football for Division III John Carroll – in the 5-foot-10, 245-pound captain, who has been quarterbacking NFL defenses for 12 years.

“I’ve been in leadership positions since I was in elementary school,” Fletcher said. “Guys would ask me, ‘What do you want to do? Where do you want to go?’ I loved watching Magic Johnson, Michael Jordan, Isiah Thomas, guys that were leaders. You could just see it in their passion, the way they approached the game, how their teammates responded to them. I love being the leader. That’s just the way I was made. But you can’t try to force your way on people.”

Fletcher didn’t have to do that in Washington. The Redskins gave him a five-year, $25 million contract on the heels of their dreadful 2006 season on defense because: he had been the NFL’s top tackler the previous seven years for St. Louis and Buffalo; he knew Gregg Williams’ scheme from running it for the Bills in 2002-03; and for his inspirational leadership.

“London’s the best football player I’ve been around,” said new Redskins defensive coordinator Jim Haslett. “He’s smart. We ask him to do a lot of things and he’s doing a great job with the defense. He makes very few mistakes. He’s the ultimate leader. I don’t think he’s gotten enough credit. I’ve watched him over the years, but until you see him [every day], see how he handles the football team. The guy is really something special.”

Fletcher doesn’t just know his job, he knows what everybody else is supposed to do.