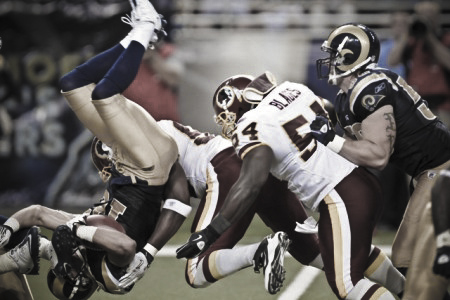 1. “Radioactive” by Kings of Leon

When the Washington Redskins pissed away a 17-point second-half lead at home to the Houston Texans, ‘Skins fans could take solace in the fact that the schedule makers were kind enough to donate the St. Louis Rams as a Week 3 “get-well present.”

It was as if the powers-that-be took pity on the Redskins and decided the schedule a cakewalk the following week to get everything right as rain heading into the most challenging stretch of the 2010 schedule.

Just one problem. The Redskins simply refuse to make anything easy on themselves and now – after a humiliating 30-16 loss to the previously inept Rams – we’re sitting here, once again, trying to figure out if the season is effectively over after just three games for the second-straight season.

On days like this it really is tough to tell which team is historically bad and which team is the one who is supposed to dominant. Let me put it this way:

The Detroit Lions were mired in the second-longest losing streak in NFL history – dropping 19 straight games. The once-proud Kansas City Chiefs, who were starting over with a rookie head coach Todd Haley and a seventh-round draft pick named Matt Cassel at quarterback, had lost 16 of their last 17 games. The Rams, as you know by now, had been defeated 27 of their last 28 games.

And yet, each one of those pitiful teams was able to get their act together long enough to defeat the Redskins – all in the last 365 days, amazingly enough.

Sunday’s 30-16 triumph marked the first career victory for Rams quarterback Sam Bradford, who joins Lions quarterback Matt Stafford and Tennessee Titans quarterback Vince Young as rookies who got their first taste of victory at the hands of Washington.

And that’s not even counting other rookies such as Joe Flacco, Bruce Gradkowski and Trent Edwards, who also picked up a win at Washington’s expense in their rookie campaign. Why even bother using Peyton Manning or Tom Brady against the burgundy and gold, when the Redskins are willing and able to put over any unproven rookie willing to step into the ring with them.

2. “All American Nightmare” by Hinder

One of the biggest issues with the Redskins in 2010 is the erratic offense. At times, the pieces in place look more than capable of matching points with most of the better offenses in football. But more times than not, the offense puts together just enough to get in field goal range and call it a day.

Santana Moss leads all Redskins receivers with 22 catches for 290 yards and a touchdown this season. Tight end Chris Cooley has 14 catches for 197 yards and a touchdown. But the rest of the options in the passing game have done nothing to show that they’re willing and able to help carry the load. Joey Galloway, Roydell Williams and Anthony Armstrong have combined for eight receptions for 179 yards and no touchdowns. I’d include Devin Thomas in the discussion, but he apparently hit on someone in the Shanahan family tree and isn’t allowed anywhere near the offense – even on a day when Armstrong is out of the lineup due to injury.

If that’s not bad enough, running back Clinton Portis has rushed 38 times for 140 yards – which is 28th best in the NFL. I don’t want to be overly negative here, but Portis has rushed for 30 less yards than Philadelphia Eagles quarterback Mike Vick, who has also managed to throw for 750 yards and six touchdowns in his spare time.

The Redskins have also scored on just two of nine trips to the red zone in 2010. Oh, and they’ve converted just six of 33 third downs this season (18 percent). So pretty much everyone other than quarterback Donovan McNabb, Cooley and Moss has disappointed this season. But other than that, everything’s great on offense these days.

After sitting out and studying film for an entire year, head coach Mike Shanahan determined that an aggressive 3-4 defense was the key to success in today’s NFL. He then hand picked defensive coordinator Jim Haslett to run this new system.

It’s foolish to rush to judgment after just three games, but it’s safe to say there’s work to be done. While the Redskins offense is converting just 18 percent of their third-down chances, the opposition is having far less trouble moving the chains – converting 18 of 43 third downs (42 percent).

Honestly, pick your poison. Opposing offenses are averaging 98 yards a game and have converted 21 first downs on the ground (compared to 74 yards and 10 first downs for Washington). In the air it’s even worse – with Tony Romo, Matt Schaub and Bradford combining for 977 yards, five touchdowns and a 95.0 quarterback rating (not to mention the 53 first downs opposing teams have racked up, compared to just 35 for Washington).

One team has trouble putting together consistent drives, has little running game to speak of and only has two legitimate targets in the passing game. The other is whoever is playing the Redskins. In years past, the Redskins defense has been good enough to carry the load while the offense tried to figure it out.

This year, that’s not happening. If the Redskins don’t get dramatically better on either side of the ball sooner rather than later, it’s going to get ugly.

4. “Giving It All Away” by Dead Confederate

And let’s not forget special teams, which continues to be a debacle each and every week. Against St. Louis, the Redskins special teamers couldn’t even wait until kickoff to start screwing things up, with punter Josh Bidwell injuring himself in warm-ups.

That meant kicker Graham Gano had to handle punting duties against the Rams. While he did an admirable job in spot duty, it’d be nice for one week to go by without the subpar special teams unit drawing attention to itself.

About the only positives I can muster up about special teams would be the play of Thomas as kickoff returner and defensive end Phillip Daniels’ blocked field goal attempt. Thomas, who you might remember is in the doghouse and only sees playing time on returns, is currently sixth in the NFL in kickoff returns with 312 yards on 11 returns (28.4 per kick). But yeah, I’m sure Galloway and friends are much better options at receiver.

Safety Kareem Moore returned to the lineup and even managed an interception in his first game of the season. That meant safety Reed Doughty could go back to focusing on special teams and he excelled, forcing a fumble. The only other major lineup issue at the moment these days (besides receiver) is the team’s continued insistency that Stephon Heyer be allowed onto a football field.

The guy is not good. If the Redskins put together a big catch – like, say, a 14-yard reception by Moss in the fourth quarter, it’s safe to assume that the play won’t count because Heyer held someone. I know Trent Williams is a rookie and it’s far more important to sit him out a week rather than rush him back into action and run the risk of Williams being in and out of the lineup all season long, but nothing good comes from Heyer starting on the blindside of your franchise quarterback. Trust me on this. I’ve seen more than enough from the guy to know that he’s not the answer.