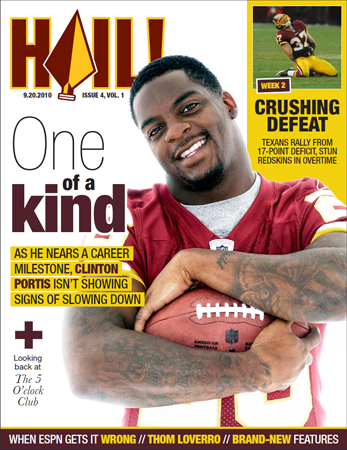 [As you can see, the fourth issue of Hail! magazine, our free digital publication dedicated to the burgundy and gold is now out. Here is a sneak peak of the main feature, written by David Elfin, in this week’s issue — an in-depth look at Redskins running back Clinton Portis as he closes in on 10,000 career rushing yards.]

Heading into Week 2, Washington Redskins running back Clinton Portis needed just 241 yards to become the 25th back during the NFL’s 91-year history to rush for 10,000 career yards.

Of course, seasons are longer than they were back then, affording more of a chance to add yards at a younger age before the legs lose their agility and spark, but 11 of the 13 backs who reached 10,000 yards and have been eligible to be elected to the Pro Football Hall of Fame are enshrined in Canton, Ohio.

Prior to facing Houston, Portis was also just 876 yards shy of surpassing Hall of Famer John Riggins as the leading rusher in Redskins history. And Portis needed two rushing touchdowns to move past Stephen Davis for second place in franchise history, behind only Riggins. Portis already holds the club record with 26 games with 100 rushing yards.

So how good is Portis? Is he Hall of Fame material despite his often crazy antics and his even more offbeat comments?

Well, if, as the saying goes, you’re judged by the company you keep, Portis can make a pretty strong case. Consider that the only backs ahead of him through Week 2 in yards from scrimmage per game (107.9) are Hall of Fame legends Jim Brown, Barry Sanders and Walter Payton, as well as Canton cinches LaDainian Tomlinson and Marshall Faulk.

Among active backs, only Tomlinson and Fred Taylor (who has played four more seasons) have run for yards than Portis.

Of course, unlike Brown, Payton and Faulk, Portis has never won a championship. But neither did Sanders. And Tomlinson and Taylor haven’t either. Portis only played in one playoff victory during his first eight seasons, but that’s all Sanders did during his 10-year career.

The Redskins have had other great backs including Hall of Famers Riggins, Bill Dudley, Cliff Battles and Larry Brown, as well as Davis and Terry Allen, but a case can certainly be made that no other back will have done more in a Washington uniform by the time the 29-year-old University of Miami product is all said and done.

Portis’ fascinating Redskins career has been about character and characters.

If he wasn’t dressing up in costume as he did virtually every Thursday during the 2005 playoff season – remember Southeast Jerome, Doctor Don’t Know, Sheriff Gonna Getcha and Coach Janky Spanky? – Portis was verbally sparring with coaches or radio talk show hosts.

Portis has never enjoyed practice or preseason, but the weekday diva transforms into a warrior on game day. And few feature backs have ever blocked as effectively as Portis, although at 5-foot-11 and 218 pounds, he’s no giant.

“I have more fun blocking than doing anything,” he said. “When I broke 60-yarders, I used to come to the sideline and be gasping for air. It was a run. It wasn’t nothing exciting. That’s what I get paid to do. When I knock somebody off their feet, that’s what’s exciting to me.”