mcnabb already a steal for redskins 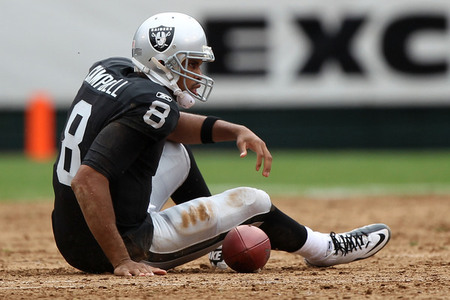 I know fans of the Washington Redskins are still hurting after watching the Houston Texans rally back from a 27-10 deficit to win in overtime, 30-27. And you know what? Honestly, I can’t blame them.

The Redskins had several chances throughout that game on offense, defense and special teams, and for whatever reason, they simply couldn’t seal the deal.

Even with head coach Mike Shanahan, one of the most successful coaches in today’s game, on the sidelines, the Redskins still looked an awful lot like what we’ve grown accustomed to in recent years. Do just well enough to get everyone’s hopes up and then find a new and creative way to lose in dramatic and heartbreaking fashion.

Even though it’s already crystal clear that the 2010 Redskins are leaps and bounds better than anything we saw during the Jim Zorn era (which is the polite way of saying the team now takes the field on even footing, as opposed to losing the game before kickoff), Washington still has work to be done. Like linebacker Lorenzo Alexander told me in the post-game locker room, the Redskins need to learn how to win.

But what I am taking away from that game is that, with not much else to work with around him, Redskins quarterback Donovan McNabb showed definitively that he’s still got plenty of miles left on those tires. The guy who couldn’t even make it through the preseason without being sidelined due to injury has not only avoided further injury — he’s been the team’s best player.

On Sunday, McNabb completed 28 of 38 attempts for 426 yards and a touchdown. He completed 73 percent of his passes, didn’t turn the ball over and finished the day with a 119.0 quarterback rating. This on a day when the Redskins ground game finished with 18 yards on 17 carries (the third-lowest output in franchise history). I should also point out that, last I checked, McNabb only has two reliable weapons in the passing game — receiver Santana Moss and tight end Chris Cooley.

So basically, he’s got two options in the passing game, no support for the ground game and a coaching staff that inexplicably thinks now is a good time to start rotating offensive linemen. Forget continuity and everything else that professional football has taught us — Kory Lichtensteiger and Stephon Heyer are so talented, the Redskins have to find a way to get them onto the field (wait, can either of them play receiver? Nevermind.)

The last time a Washington Redskins quarterback threw for more yards than McNabb did in just his second game in burgundy and gold was Brad Johnson, back in 1999. On the day after Christmas, Johnson threw for a franchise-record 471 yards against San Francisco. As it stands now, McNabb’s effort against Houston was the third-best day of his career and the fourth-best effort by a Redskins quarterback.

In short, McNabb is still capable of playing at an elite level and by all accounts was an absolute steal for the Redskins this past offseason. Not that McNabb is in a hurry to pat himself on the back or anything.