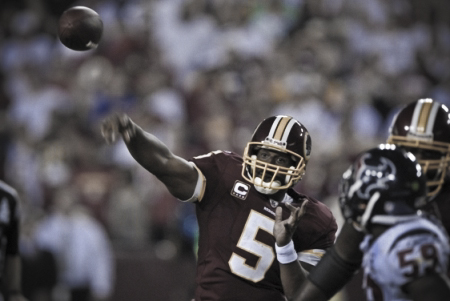 For just the fifth time in NFL history and the first time since 1994, two quarterbacks threw for at least 400 yards in the same game.

Sure, Houston Texans quarterback Matt Schaub was only 14 years old when Dan Marino and Drew Bledsoe last accomplished this feat, but he definitely looked the part as he guided Houston to their first-ever overtime victory, 30-27.

Schaub’s passing numbers for the day are simply astounding. He completed 38 of 52 for 497 yards with three touchdowns and an interception. That’s good enough for a mind-numbing 73 percent completion percentage and a sparkling 114.0 quarterback rating.

Oh, and did I mention Schaub nearly had to leave the game due to an ankle injury in the fourth quarter? Yeah, when we’re looking back on Schaub’s career highlights, this one’s coming up sooner rather than later.

“They came and told me he was done – he had a pretty good ankle [injury],” Houston head coach Gary Kubiak. “I think we were down by seven and fixing to kick a field goal at that time, so it didn’t look good. We blocked the field goal, we had them re-tape him and he walked over to me and said, ‘I’m playing.’ So, if he tells me that he’s playing, he’s playing.”

Schaub stayed in the game and Houston was able to make enough plays down the stretch to win Sunday’s most exciting game.

2. “Lights Out” by Fabolous

Let me say this up front – moral victories are for losers. The Redskins and Texans played evenly for nearly five quarters, but in the end, the better team won. I’ve got no problem admitting that. That being said, there are a few positives worth noting from yesterday’s contest.

As I mentioned at the top, Redskins quarterback Donovan McNabb had a pretty solid day as well. Making just his second start in the burgundy and gold, McNabb completed 28 of 38 passes for 426 yards and a touchdown. Hell, McNabb was so money on Sunday that he somehow defied logic and passed for 101 yards on one drive. That’s not something you see every day.

Any other game, his 73.7 completion percentage and a 119.0 quarterback rating would be the talk of the town. Unfortunately, Schaub was just as sharp, so the stats will be largely overlooked.

Let me point this out – McNabb’s 426 passing yards are the fourth-most in team history and the most since quarterback Brad Johnson threw for a club-record 471 yards against San Francisco, Dec. 26, 1999. It was also the third-best passing day of McNabb’s distinguished career, which isn’t bad considering Philadelphia was pretty convinced his best days were long gone and all.

“It felt real good to get the offense rolling this game,” he said. “I was making comments on the sideline how it felt kind of like practice. Everything was coming and you know when the ball is coming your way. Everything is kind of working in unison and working smoothly. I think it’s going to be a lot to build on going into St. Louis.”

The best part about Sunday’s game was that the Redskins offense finally arrived. Not counting a preseason game against a pitiful Buffalo squad, this offense had yet to show they were capable of producing much of anything.

Up until this point, the Washington offense was good enough to put together an occasional drive that typically stalled right around the red zone and then would have to settle for a long field goal attempt. For one day, at least, they found the end zone.

The Redskins led 27-10 with less than a minute to play in the third quarter. So how the hell did this one slip away? Well, asking around the locker room, many players pointed to a 50-yard screen play from Schaub to Foster as the moment they officially let Houston back in the game.

“It was probably the big screen play they ran, it was huge,” said linebacker Brian Orakpo. “Foster caught the ball and ran it down to the [six]-yard line. That was a huge turning point. We had to hunker down but they kept moving the ball and kept fighting … they just finished it and that’s what good teams do.”

Orakpo, safety LaRon Landry and middle linebacker London Fletcher continue to shine for the Redskins on defense. Unfortunately, they can’t make a play on every single down.

4. “I Wanna Be Sedated” by Ramones

For seven of the last 10 seasons, the Redskins have boasted a top-10 defense. Points have been tough to come by for Washington, but the defense has usually played well enough to keep them in games. I say usually because there are occasional stink bombs like a 52-7 thumping by New England or a game like this one, where Houston is able to rack up 526 total yards on offense.

Everyone knows that Houston had the top-ranked passing attack in football last season, but it was still startling to see them move the ball with such ease against a usually stout defense. As best I could tell, the Texans’ gameplan seemed to be move receiver Andre Johnson around pre-snap to ensure he was lined up against either cornerback Phillip Buchanon or safety Reed Doughty.

Once they got that ideal match-up, there was little doubt what came next – the NFL’s premiere receiver was going to make someone look foolish. Johnson finished the day with 12 catches for 158 yards and the game’s most important touchdown.

On fourth-and-10 with less than three minutes to play, Schaub connected with Johnson for a 34-yard score that tied the game up at 27 apiece. It should come as no surprise which two defenders failed to make a play on this vital fourth down.

Buchanon and Doughty were both playing deep. Schaub bought enough time in the pocket to chuck the ball up in the general direction of Johnson. Buchanon clearly lost sight of the ball and stopped around the five-yard line. That left Doughty all alone with Johnson, which meant a sure-fire touchdown for the Texans.

“Well, obviously it was a great athlete making a play,” said Redskins coach Mike Shanahan. “He threw it up there and he had a lot of pressure on him. I think the quarterback did a good job of just kind of sitting back there and buying some time. He just kind of threw it up in the air and you have a great athlete, who has an excellent vertical jump, who made a big play in the end zone.”

As more than one Redskins player told me privately in the post-game locker room, “”Let’s hope Kareem Moore is back next week.”

And finally, there’s the Redskins special-teams unit, which continues to emphasize the “special” part. A week ago, it was punter Josh Bidwell who earned the ire of the fans for his less-than-stellar outing.

This week, ‘Skins fans were “treated” to a blocked 29-yard field goal attempt during the fourth quarter and then there was overtime.

Redskins kicker Graham Gano made a 52-yard field goal attempt in overtime, but it didn’t count because Kubiak called timeout just before the snap. Because this is the Redskins were talking about, Gano’s second attempt was wide right. Houston got the ball back and the rest, as they say, is history.

Two games in, and the only positive on special teams seems to be kick returner Devin Thomas. Of course, the third-year player isn’t getting any playing time on offense, so he’s got all the time in the world to dedicate to special teams. Maybe we can get him to start working on punting and kicking skills …