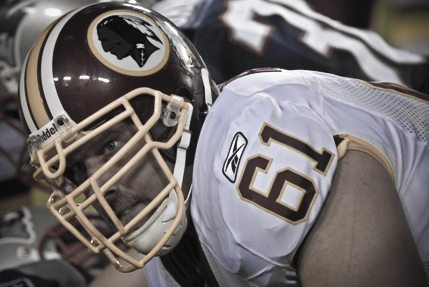 When I started this website a couple years ago, I did so with the intent of providing fans of the Washington Redskins a peek into the world of professional football. I wanted to show some of the amusing personalities of the guys wearing the burgundy and gold and, if nothing else, I wanted to help ‘Skins fans learn a little bit about the players they cheer for on Sundays so not everyone out there felt like that old Seinfeld bit about “cheering for laundry.”

Well, if you want personality, I’ve got personality for you. And, as a bonus, it comes with a nice little story that only enhances the rivalry between the Redskins and the Dallas Cowboys.

In the era of free agency, players from supposed rivals can often be seen after games hugging and yucking it up with “the enemy.” Sure, fans might still get heated about rivalry games, but sometimes it feels like players honestly don’t care whether they’re playing the Jets or the Giants. They admit that divisional games are vital for any team’s postseason hopes, but it’s not like they lose sleep over a poor showing against the Cowboys.

Well, you’ll be happy to know that some players on opposite sides of the Redskins-Cowboys rivalry still hate each other.

Ratliff is one of the best interior linemen in professional football, and if we’re being honest, has been known to give undersized centers like Rabach fits. Well, it turns out that, even though he’s been known to get the upper hand on Rabach once or twice, it’s not been all that enjoyable. In fact, Ratliff went as far as to tell a few folks that in his opinion, Casey Rabach is the dirtiest player in the game.

If Ratliff is to be believed, then Rabach will pull on the back of his helmet, stomp on feet, spit at him — basically anything and everything he can get away with in the heat of the action. Now, the Rabach most Redskins fans know is the guy who rents an RV with Jon Jansen during training camp and goes ice fishing during the offseason. He’s laid back and always ready to crack jokes. So this news came as a bit of a surprise to me.

It’s easy to envision an overly intense guy like LaRon Landry breaking out every 80’s professional wrestling dirty tactic, but I guess Rabach’s lighthearted demeanor makes the allegations a little bit more surprising. With that in mind, I caught up with Rabach to get to the bottom of this.

Oh, and consider this a warning, if grown-up language offends you.

With that out of the way, let’s get right to it.

Ratliff says, for his money, you’re the dirtiest player in the NFL. He says you’ll do anything and everything it takes to try and win those individual battles. What say you?

“Fucking A, I will,” he said. “Are you shitting me? Yeah. This ain’t fucking tiddlywinks. This is football.”

Well, then. He didn’t exactly deny it there, did he? I guess this is an open and shut case. I decided to ask a follow-up question.

The reason Ratliff says he hates playing against you is because you’ll grab his helmet, you’ll spit at him, you’ll basically do anything possible to try and gain an advantage. That sounds about right to you?

With a huge grin on his face, as if he was beaming with pride, Rabach then said: “I can neither confirm nor deny those allegations.”

Wait a minute, you went from “Fuckin A” to “I can’t confirm or deny?” What is that?

(At this point Rabach was laughing too hard to answer any further questions on the topic. I decided to call an audible.)

You’ve been on the Redskins long enough to know that game against Dallas is one this team never wins. Any time the game comes down to one final play and the Redskins need one final stop or one call to go their way, it never happens. The Redskins never catch a break and get a win in a game like that. How big was that victory?

“It was huge,” he said. “Maybe karma is finally switching in our direction, you know? It seems like a lot of the times when we play these guys, it comes down to a situation like this. I remember the ’05 game when ‘Tana caught those two touchdown passes in the fourth quarter. I remember the blocked field goal with Sean Taylor. In ’08 there was the four-minute drive at the end to seal it. Those were all good games, man. And a ‘W’ is a ‘W.’ We love it.”

This one, for my money, reminds me a lot of the game in Dallas last year. You guys were up 6-0 and needed one final stop at the end, but things didn’t work out. So, with the way this one ended, with it looking like they scored the touchdown on the final play, what was going through your head?

“I saw the flag right away,” Rabach said. “I was immediately excited because I knew that was offensive holding, which meant we had won the game.”

There was never a second where you thought they had just won the game?

I should point out that immediately following the win, Rabach’s voice was almost completely gone. He attributed it to all of the yelling and screaming going on during the celebration after the dramatic victory.

Clearly, this one meant more than your average win to Rabach. And listening to how quickly he was able to rattle off the key moments in the Redskins’ wins over Dallas during his time here, it’s safe to say that this rivalry means something to Casey. Don’t take my word for it. Ask Ratliff.