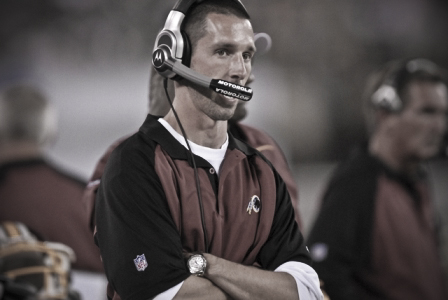 Lets be honest – we, as fans of the Washington Redskins, don’t know much about the Houston Texans. They’re an AFC team that hasn’t been around all that long and hasn’t been very good during that time. Which means they’re rarely on TV in our neck of the woods, unless you’re paying for the NFL Sunday Ticket. About the only memory I have involving the Texans is former Redskins quarterback Mark Brunell somehow completing an NFL-record 22 consecutive passes (without gaining a single yard) back in 2006.

And since that useless fact isn’t really going to help anyone prepare for this weekend’s matchup, I decided to reach out to a well-respected Texans blogger in hopes that she could get ‘Skins fans up to speed on our Week 2 opponent. Thankfully, she delivered. Without further delay, here’s a quick intro and then five questions about the Houston Texans:

My name is Stephanie Stradley. I write a Houston Texans blog for the Houston Chronicle and write miscellaneous stuff for AOL Sports’ FanHouse. Also, I’m a volunteer moderator for the official Houston Texans message board and the terrific fan supported TexansTalk.com message board.

In 2006, I was voted Ultimate Texan Fan, and the Texans sent me to the Super Bowl. As a four-time finalist of the contest, I got to run out on the field in front of the team with one of the T-E-X-A-N-S flags. An amazing feeling.

I’ve followed the Redskins since I was in elementary school because I lived in northern Virginia for two years, and it was the first time I had ever lived near a city with a team. Can’t say I’ve appreciated Dan Snyder’s ownership style, but maybe this time he gets it right with the Shanahans. Most importantly to Redskin fans, I hate the Cowboys.

1. Okay, let’s get right to it. Was last weekend’s resounding victory over the Indianapolis Colts a fluke or a sign that the Houston Texans have officially arrived?

The Texans have come close to beating the Colts a number of times, and have dominated them at times, but for this game, they did it for most of 60 minutes. That’s pretty much the theme of the 2010 Texans – can they dominate for the full 60 minutes or do they let teams come back on them? Can they beat good teams?

2. As you know, the Washington Redskins brought in Kyle Shanahan to become the team’s offensive coordinator during the offseason. In your opinion, what was his impact in Houston and what does he have in store for the Redskins?

When Kyle Shanahan was first hired as the Texans wide receiver coach, I was very skeptical. How was this former University of Texas wide receiver going to tell Andre Johnson what to do? He was younger than Eric Moulds who was on that 2006 team.

So, when I had the opportunity to attend a coaching clinic involving assistant coaches, I made sure to attend his session to see why the Texans hired this guy. He looked so young, but you forgot about that as soon as he started breaking down film and talking about technique issues.

He knows his father’s offense as well as anyone, and does a great job of communicating not just what players are supposed to do, but why they are supposed to do it to make the play work. The Texans players were sorry he left but feel happy he is working with his dad. It was pretty clear that eventually, after Kyle established himself away from his father, he would work with him eventually.

Basically, his best role for the Redskins and for the Texans was to be a brain annex to the head coach. If you have an offensive-minded head coach who has a proven scheme, you don’t want to have an offensive coordinator that has a completely different vision. The best teams in the league have a blueprint of what they want in players and how they fit into their system.

I think he helped the Texans with a consistent offensive philosophy, and I think he does that same role for the Redskins. I am very high on the future of your offense. (So high that on my Blogger Fantasy League team, I picked up Chris Cooley, even though I have Dallas Clark because I think he will have a sweet season and I wanted trade bait at least). And Kyle Shanahan knows the personnel of the Texans very well because he played a big part of acquiring a lot of them.

3. First, Texans running back Arian Foster seemingly came out of nowhere last weekend to destroy the Colts, and now you tell us that he’s also a poet. Just how good is this guy going to be and what can you tell us about him off the field?

I thought Arian Foster would be the companion back with Steve Slaton since before last season, and I thought the Texans running game could be improved with the choice of Rick Dennison as offensive coordinator. Kubiak has done such a good job with the passing side of things, Dennison acts as sort of his brain annex on the running game side of things.

Foster has looked very good in the preseason and obviously in the first game of the regular season. Dennison says that the Texans are committed to the running game, and I guess they showed that commitment that first game.

I don’t think the gameplan against the Colts is the typical one that the Texans will use. The best-case scenario for any old school Denver-style offense is to put a bunch of points on the board early in the game with explosive combination of running and passing plays, and then break the defense’s will in the second half with the running game.

With the game against the Colts, they were mostly playing keep-away from Manning, but I think few defenses are as bad against the run as the Bob Sander-less Colts defense is. Usually teams can’t test the Colts run defense so much because they get behind in games.

I haven’t talked to Arian Foster much, but the times I have, I find him to be an interesting, thoughtful guy. Texans have a lot of players who are easy to root for – unselfish, team guys – but who have their own personalities and are pretty funny. Foster is a very philosophical Twitter follow.

4. Critics across the country crushed Houston for drafting Mario Williams over Reggie Bush and Vince Young, and yet, every time I see film of the defensive end, he’s making plays. Has Houston embraced the youngster after all of that and how much trouble is Williams going to give Redskins rookie tackle Trent Williams this weekend?

One of the reasons I started blogging was that I thought the world turned insane during the 2006 draft. The Texans got crushed for picking a true junior defensive end, a premium position hard to acquire through free agency, with the measurables and college numbers similar to Julius Peppers over a running back and quarterback whose skill sets were questionable on how they would translate to the NFL.

The draft talk was more about flashy names then projecting to the NFL for top of the draft salary. The Texans passed on Peppers in 2001 to pick David Carr, and the success of the franchise was stunted because of that. After a 2-14 season, there weren’t too many Texans writers out there, and most media was too busy figuring out ways to crush a guy before he had his first snap. I decided to be a voice in the wilderness because I was curious how this new coach Kubiak was going to rebuild the Texans team, pretty much from scratch.

Mario Williams is due for a new contract and he is healthier than he was last year, so I am guessing that Trent Williams is going to have his hands full. Also worth noting that sometimes the Texans move “Super Mario” on the line some to get the best matchup – defensive coordinator Frank Bush has already done a few things this season that are unusual for the Texans defense, so it will be interesting to see if they do any special game planning for the Shanahans.

5. In your opinion, what is the key to Houston staying undefeated against the Redskins this weekend? On the flip side, what are the Redskins going to need to do in order to beat Texas’ other team?

Key for a Houston win: Protect the young Texans cornerbacks by dominating at the line of scrimmage. Young corners get few calls, so the line has to dictate play by shutting down the run and forcing errant throws. They need to continue to play physical ball but not lose their composure if they get calls against them. To me, the surprise of this preseason/first game was how much harder the Texans defense seems to be hitting. Lots of kill shots from a lot of different players.

Key for a Redskin win: The Texans offense has the reputation for struggling against 3-4 fronts. I think that concern is a little overblown – I think they struggle against good 3-4 teams with imposing nose tackles, but then again, most offenses struggle against quality 3-4 defenses. (Texans right tackle Eric Winston agrees.)

The Redskins need to get the Texans into uncomfortable down and distance situations. It’s a key point of the old-school Bronco-style offense. By keeping down and distance sane, you keep defenses off-balance because they can’t guess run or pass. The line is not built to get into pass block only mode.

One final note, thanks for the inviting me to do this, and I will extend the invitation to Redskins fans to make the Texans their favorite AFC team. I’m guessing that will happen anyway when they play the rest of the NFC East.