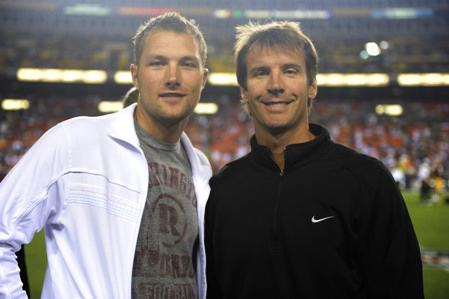 As I said on Twitter, FedEx Field was apparently the place to be when the Washington Redskins hosted the Dallas Cowboys Sunday night. Forget the fact that the Redskins won just four games a season ago. A new general manager, head coach and quarterback were apparently enough to restore hope and/or faith in the burgundy and gold.

The Redskins announced that more than 90,000 people were in attendance for the season opener, and included in that number were several familiar faces. Of course, there was LeBron James. He brought a personal point guard with him, Chris Paul.

There was also the unofficial rapper of the Washington Redskins – Wale. But for my money, the best random cameo goes to David Steckel and Mike Knuble of the Washington Capitals. First of all, who knew that Ohio State Buckeyes and Michigan Wolverines could co-exist (especially when it comes to football)?

Second of all, this continues last season’s trend that saw Alex Ovechkin, Nicklas Backstrom, Mike Green and Bruce Boudreau take in a game at FedEx Field (and attempt a few field goals during warm-ups). I think I’m qualified to speak for D.C. sports fans in general by saying it’s always cool to see your favorite local athletes supporting other D.C. teams. Since the Capitals have been much more consistent winners over the last few years, I can only hope that their good karma is rubbing off on the Redskins. Because, let’s be real – after the Maroon and Black era, ‘Skins fans are due for a turn of good luck.

Either way, thanks again to Steckel and Knuble for coming out and supporting the other local teams. And we’ll see you guys back in action in the near future as well.