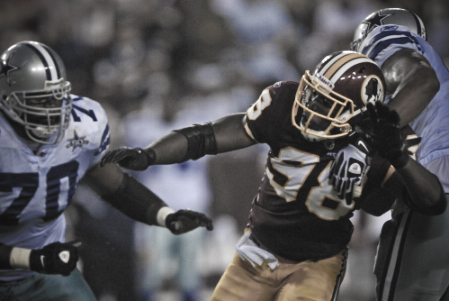 The Washington Redskins and the Dallas Cowboys have been battling long enough that fans on both sides of the rivalry should know by now what they’re going to get.

Regardless of records, these two teams are going to play each other close. It’s typically a low-scoring affair and the final outcome is almost always decided on the final possession of the game.

Because these games are so tightly-contested, one mental error or small mistake can mean the difference between victory and defeat. And let’s be honest – far too often it’s the Redskins who end up on the losing end of these heated match-ups.

Not this time though. The Redskins offense failed to score a touchdown against the Dallas defense for a third-straight game, and yet, Washington scratched and clawed their way to a 13-7 victory of the Cowboys in their season opener.

The first play came with just four seconds remaining in the first half. On first and 20 from their own 36-yard line, Dallas decided not to take a knee and go into half trailing just 3-0. Instead, quarterback Tony Romo shoveled a pass to running back Tashard Choice, who turned upfield and, for reasons only known to him, decided to initiate contact with Redskins defenders and fight for extra yards – even as time was expiring.

Cornerback DeAngelo Hall was the first defender to arrive, but was soon followed by linebacker Andre Carter and others. The pack of defenders was able to pry to football free from Choice and, before the Cowboys even realized the football was no longer in Choice’s possession, Hall scooped up the loose ball and high-stepped his way to the end zone.

Suddenly, a Washington team that had largely been outplayed in the first half was now leading 10-0 and all momentum was now in the home team’s favor.

“That was my fault before the half,” Cowboys coach Wade Phillips said. “We should have taken a knee. The right thing to do was going for three or nothing. They declined the penalty, so we were going to run a Hail Mary and then when they took it back and took the penalty, we needed to call it off and we didn’t do it.”

As if the last play of the first half wasn’t exciting enough, the two teams decided to do it again on the final play of the game.

This time, Dallas had the ball on the 13-yard line with three seconds left. As the center hiked the ball to Romo, it seemed as if time stood still. Sure, it was only seconds, but it honestly felt like an eternity waiting for that play.

Although pressure was coming at him from all angles, Romo was somehow able to evade the Redskins pass rush and find receiver Roy Williams in the end zone for a backbreaking touchdown. Only one problem – offensive lineman Alex Barron, the NFL’s most penalized player, was called for holding linebacker Brian Orakpo.

No touchdown. No more time on the clock. Somehow, someway, the Redskins won the game.

“It’s a difficult feeling when you thought you won and then to have it taken away from you,” Romo said.

I’d like to say I feel sorry for you, Tony. Lord knows, as a Redskins fan, I’ve been there and felt that same emptiness you’re saddled with. But truth be told, it’s about time someone else had to deal with that level of heartache.

Better you than me, big guy.

Heading into this Week 1 bout, the Redskins had one huge advantage over the Cowboys – there was no film of the team’s brand-new 3-4 defense. Sure, you could go back and watch footage of the Pittsburgh Steelers from when defensive coordinator Jim Haslett was there, but it’s not the same.

The fact is, the Redskins had never before utilized a 3-4 defense in franchise history and anything opponents saw during the preseason was vanilla and ultimately meaningless. The first impression of this defense is definitely favorable – with the defensive front doing an admirable job of tying up blockers and freeing up linebackers to make plays.

Rocky McIntosh, London Fletcher, Orakpo and Carter were everywhere. Add in safety LaRon Landry, who is a linebacker at heart, and those five players combined for 44 tackles and a sack.

And speaking of Orakpo, just when you thought it was impossible for the second-year standout to raise the bar any higher, he finds a way to take his game to the next level. Once right tackle Marc Columbo was officially ruled out for Dallas, the Redskins coaching staff knew that Barron was no match for Orakpo.

So even though he usually plays on the other side, Orakpo was switched to create a mismatch. And, from that point on, anytime Orakpo wanted to take Barron’s lunch money, he did. The former Texas Longhorn simply used his speed to blow by the sluggish lineman in pursuit of Romo. Barron, at that point, had little choice but to grab Orakpo any way possible, in hopes of saving his quarterback’s life.

“That’s called game planning,” he said after the game. “We knew Colombo wasn’t in there and we had to exploit their weakness. I was freestyling out there on him because I knew we were in good shape with that matchup.”

The best part is – Orakpo was clearly less than 100 percent. Any time there was a stoppage in play, Orakpo was lying on the ground, receiving treatment from the training staff because he kept cramping up. I was half convinced he’d have to leave the game and the Redskins defense would have to finish the final drive without its top weapon. Thankfully, it never came to that.

For all the offseason drama involving disgruntled defensive lineman Albert Haynesworth or the addition of quarterback Donovan McNabb and all of the other new faces, this game was ultimately decided by the old guard.

Tight end Chris Cooley and receiver Santana Moss were the only reliable options in the passing game and Clinton Portis recovered from a slow start to finish with 18 carries for 63 yards. It was pretty, but it was enough on this night.

On defense, it was Orakpo, Landry, McIntosh and Hall who rose to the occasion. And think about this – last season, the Redskins clung to a six-point lead in Dallas. If the defense could make one final stop, the Redskins would be victorious. Unfortunately, Romo and friends put together one drive all day long, but it was the difference maker.

One year later, history nearly repeated itself, but this time the boys in burgundy and gold were the ones celebrating.

“It’s an unbelievable feeling,” said Cooley. “This is so huge for us. This team has really come together. The importance of starting fast, getting some momentum and getting wins like this is everything. Everyone knows how tough it is to win in the NFL. There are so many games, even last year when we weren’t playing well came down to the fourth quarter. You have to be able to win at that point, and if we can find a way to win it’s going to be great.”

After the game, Redskins owner Daniel Snyder could be seen sprinting from down the hall, from the owner’s box to the locker room. Moments before heading in to congratulate his players on a hard-fought victory, Snyder did a small fist pump and hollered “YESSSS!!!!!” to no one in particular.

At the same time, Redskins players could be seen bouncing off the walls, as they soaked in the team’s first divisional win in more than a year. Everyone who has been around town for more than a day or two was on cloud nine. Everyone, except head coach Mike Shanahan.

He simply acted as if it was another day at the office. There was no “Hip-Hip Hooray.” There was no bold declarations. In fact, if you crossed paths with Shanahan immediately after the game ended, you’d have had a tough time guessing if his team was victorious or not.

“You have to find a way to win in this business,” Shanahan said. “A lot of teams are very close and especially against good football teams, you got to find a way to get it done. That is what our football team did today. They played exceptionally well on defense, special teams and offense. They had a couple of good things but we have a ways to go. We are going to keep on working to try and get us at the level that it takes to be a championship offense.”

That’s the message of a man who isn’t going to let his team become satisfied with one win – even if it involves beating a bitter rival. He’s not going to let them read their press clippings or become complacent. He’s going to let them enjoy the win for 24 hours, and then it’s back to the grind in preparation from next week’s opponent.

Redskins fans can enjoy this one for a while, but by the time you read this, Shanahan is already gamplanning for Houston.

He’s not happy with one win, he’s got bigger plans for this team. And I, for one, couldn’t be happier.

Bonus track: Click here to see all of my photos from the Washington Redskins 13-7 win over the Dallas Cowboys.