five players to watch versus dallas 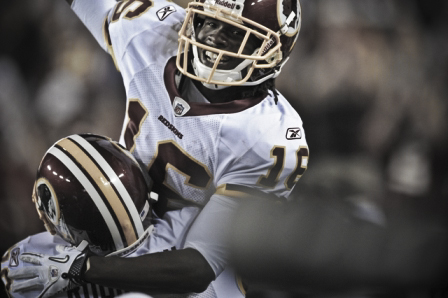 Today is one of my favorite days of the year. When the New Orleans Saints take on the Minnesota Vikings, it officially marks the start of the 2010 NFL season.

For fans of the Washington Redskins, it means we’re one day closer to getting answers to some of the vital questions this offseason has brought us.

How much of an upgrade is Mike Shanahan over Jim Zorn? Can Donovan McNabb stay healthy and productive? When will the Albert Haynesworth drama mercifully end?

Those are some of the bigger focal points that the national media seems to be keying in on. For me personally, the plan is to focus my attention on a few lesser publicized areas for the season opener.

In fact, here are the five players who very well may decide the outcome in the season opener:

Trent Williams, offensive lineman – Former Redskins tackle Chris Samuels is on record as saying that Cowboys defensive end DeMarcus Ware was easily the toughest challenge he faced during his career. And Samuels, in case you forgot, was a six-time Pro Bowler. Now we’re talking about Ware lining up against a rookie playing in his first NFL game.

For my money, Williams has looked superb for most of the preseason. He struggled at times against Terrell Suggs in the Baltimore game, but that’s something that happens to a lot of offensive linemen. Same goes for Ware.

Williams is strong. He’s athletic. He’s quickly turning into a film junkie – happily dedicating his free time to watching game film to see what he’s doing right and what he needs to improve upon. Considering a big chunk of the local fanbase would have preferred the Redskins went the safer route by selected offensive lineman Russell Okung with the fourth overall pick, Williams has absolutely exceeded any and all reasonable expectations thus far.

Even if the Redskins help Williams out in the blocking game, he’s still going to have his hands full keeping McNabb’s blindside protected. It’s safe to say that, much like the Redskins, Williams faces a major test right out of the gate. And how he fares will go a long way towards determine he’s team’s fate.

Reed Doughty, safety – Doughty is a nice guy. Doughty is a consummate professional. Doughty is a feel-good story. And yet, the thought of him and LaRon Landry starting at safety against the high-powered Dallas aerial attack scares the hell out of me.

If Kareem Moore was healthy and able to play this weekend, I’d feel a lot better about the Redskins secondary. But with Landry and Doughty in the lineup, two guys who are best suited to essentially fill the same role, it’s a big enough potential pitfall that Jim Haslett better have a trick or two up his sleeve.

His 3-4 defense has been admittedly vanilla throughout the preseason, which is fine. Now is the time to show folks what you’re made of. Coaching careers in Washington are defined by successes and failures against Dallas. If Haslett wants to make a strong first impression, he better be ready.

“Freddie Delight” made the most of the opportunity, leading the Redskins in touchdown receptions with six. His production was so solid that some fans actually began suggesting that the Redskins might want to consider trading away Cooley and turning the job over to Davis (for the record, those people are morons. Why anyone would openly root for the team to trade away talent at one of their only positions with depth, I will never understand.)

So here we are, a year later and now both tight ends are healthy and ready for action. Can Davis find a role in the offense with Cooley back in the lineup? That’s what we’re about to find out.

I personally think that, with the lack of depth at receiver, the Redskins could use their tight ends in a unconventional manner. I think we could see Cooley become the team’s primary possession receiver and Davis, with his speed and athletic ability, could become the go-to guy in the redzone.

If that’s going to happen, then it’s on Davis to continue to force his way into the discussion. Towards the end of the preseason, he was on the field late in games playing against guys who are no longer on NFL rosters and didn’t exactly light up the stat sheet.

Here’s hoping the guy who was first known for oversleeping on his first day as a professional is awake and ready to go now that the regular season is upon us.

Maake Keomeatu, defensive lineman – For the love of Haynesworth, I hope this guy is able to step back onto a football field and immediately solidify his spot in the middle of the defensive line.

If Kemoeatu is able to do that, then the Redskins defense will be in good position to unleash that aggressive attack we’ve heard so much about this offseason. If not, then things can immediately get dicey because, it goes without saying, a defense that is vulnerable up the middle isn’t much of a defense at all.

If Kemoeatu struggles, then we’re looking at more Haynesworth drama or praying an unheralded guy like Anthony Bryant can step in and get the job done. The Cowboys have a three-headed ground game with Marion Barber, Felix Jones and Tashard Choice, and will no doubt test Kemoeatu early and often.

The best-case scenario involves the 31-year-old successfully clogging up the middle and freeing the Redskins linebackers to get after Cowboys quarterback Tony Romo. Let’s cross our fingers and hope like hell that’s what happens.

Brandon Banks, punt returner/enigma – Truthfully, I’m skeptical that Banks will even be on the active roster Sunday night. But, then again, I didn’t think he’d make the roster over someone like Terrence Austin after he kept finding new ways to fumble a football throughout the preseason. So maybe I haven’t exactly figured out Shanahan and friends just yet.

Clearly, they’re not afraid to take a chance when it comes to high-risk, high-reward guys like Banks. Maybe it’s ego (thinking they can correct the problem and bring out the best in a player), but they’re willing to focus on the blazing speed over his inability to keep two hands on the ball at all times.

If he somehow cracks the lineup, then Banks might be the most pivotal player in burgundy and gold this weekend. One big punt return could swing the final outcome in favor of the home team. Of course, one ill-timed fumble could also seal Washington’s fate. Either way, all eyes are on him if/when he takes the field.