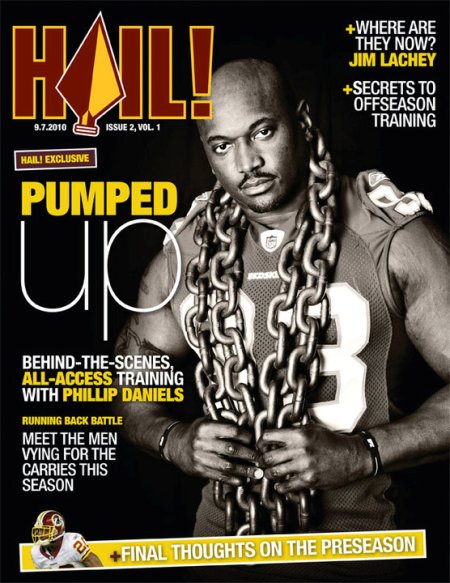 I am proud to announce that I have joined up with a few supremely talented individuals to create Hail! magazine – a free, online publication dedicated to the burgundy and gold.

Each week during the season, this digital magazine gives Redskins fans an inside look at the players they love to root for – whether through in-depth personality features, behind-the-scenes look at life away from the field, etc.

I should also point out that I am the editor of Hail! magazine, so if there is a particular player or story you’d like to see in the magazine, then I encourage you to drop me a note and let me know. And did I mention the award-winning photography? Yeah, we’ve got some of the best photographers and, unlike anywhere else on the net, we’re more than happy to show you big, beautiful photos of all the action. But don’t take my word for it, see for yourself.

To show ‘Skins fans what we’re about and to prove that we’re doing stuff that you simply cannot find anywhere else on the internet, I’ve included a teaser for my feature story on Phillip Daniels, a 15-year veteran who uses powerlifting during the offseason to keep his body in shape. If you like it, then make sure you subscribe to the magazine.

Oh, and did I mention that one lucky fan will win a game-worn Phillip Daniels jersey? All you’ve got to do is subscribe and you’re automatically entered for a chance to win a 2010 Redskins jersey off of his back.

“The only thing old on me is the clothes on my back.”

Washington Redskins defensive lineman Phillip Daniels came into the league in 1996. To put that in proper perspective, when he lines up against Redskins rookie tackle Trent Williams during practice, he’s taking on a player who was just seven years old when the Seattle Seahawks used a fourth-rounder, the 99th pick overall, on the Georgia Bulldog.

Three picks later, the Redskins drafted Auburn running back Stephen Davis, who left town after the 2002 season. No other Redskin from the ’96 class played in the National Football League after 1999. In a profession where careers are over in a flash, those days seem like a lifetime ago.

And yet, Daniels is still going strong. Don’t get it twisted either. He’s not some charity case collecting a paycheck. Dude’s still a productive member of a perennial top-10 defense. He still relishes the chance to do battle in the trenches week in and week out with players who are closer in age to his son than they are to a greybeard like Daniels.

Not bad for a guy who turned 37 this year. So how does he do it? After 15 years, how is Daniels able to beat the odds and still play at a high level?

“He’s a real professional,” said defensive lineman Kedric Golston. “He knows his body better than anyone else around here and he really knows how to take care of himself.

Ray Lewis. Lawyer Milloy. Brian Dawkins. Terrell Owens. Out of the 254 players selected in 1996, Daniels believes those are the only other guys still playing in the NFL today. You’ll notice that none of them are linemen.

“When I got drafted in the fourth round, I took it personally,” he said. “I took it upon myself to prove everybody wrong who passed on drafting me. I wanted to show them that I’d be the last one standing.”

Using a perceived slight as motivation isn’t anything new in professional sports. But let’s be real – that vengeful mindset might help a rookie, but 15 years later, it’s not the only reason Daniels is still going strong.

“It’s all about how I approach the offseason,” Daniels said. “I figured out what I needed to do in order for me to keep up with these young guys. I take about two weeks off. That’s really all I need, and then I start getting right back into my workouts.

Two weeks. That’s enough time for a couple alcoholic beverages and an abbreviated family vacation. And then it’s back to the grind.