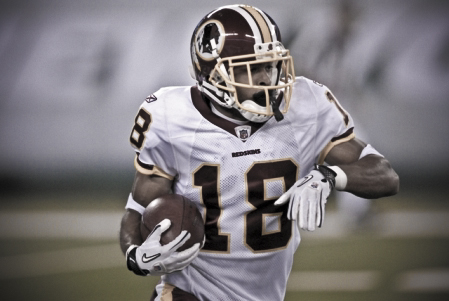 Saturday was a busy day for the Washington Redskins, who traded cornerback Justin Tryon to Indianapolis and released 21 other players in an effort to get down to the final 53-man roster.

While the majority of the players released weren’t all that surprising, there were one or two guys I thought would have made the cut. Here’s the rundown of the players who were asked to turn in their playbooks:

Terrence Austin, receiver – I thought the rookie out of UCLA played well enough this preseason to earn a roster spot. While receiver Brandon Banks does add an element of excitement (in both a positive and negative way) to the return game, Austin has been much more consistent on returns and during his limited time with the offense.

Richard Bartel, quarterback – Most folks thought the Redskins would only keep two quarterbacks – Donovan McNabb and Rex Grossman – heading into the season. With McNabb already nursing a sore ankle, chances of Bartel surviving as the third option looked good – until John Beck’s extension was announced.

Selvish Capers, offensive lineman – I’m a fan of Capers. Sure, he’s rough around the edges now, but I can see a day when he’s a reliable option on the Redskins’ offensive line. Let’s hope he makes it safely to the team’s practice squad.

Tyrone Carter, safety – Carter looked solid in his brief time in Washington and has extensive experience in this 3-4 defense. The only thing I can think here is that Kareem Moore is closer to returning than expected, so the Redskins are willing to go into the season with just three healthy safeties (LaRon Landry, Reed Doughty and Chris Horton) until he returns.

Erik Cook, offensive lineman – With Austin and Capers, Cook becomes the third 2010 draft pick released in the first five names listed. That’s not good. Dennis Morris was traded to St. Louis (and then released by them), which leaves just Trent Williams and Perry Riley left from the ’10 draft class.

Carey Davis, fullback – As long as Mike Sellers is healthy, it seems the team is content carrying just one fullback.

Howard Green, defensive lineman – There are plenty of other candidates ready and able to play nose tackle.

Robert Henson, linebacker – Henson deserved to make the 53-man roster. When given the chance Henson played well this preseason, until a knee injury sidelined him. Tough break, but hopefully it’s something the youngster can bounce back from.

Shay Hodge, receiver – Was nothing more than an extra body for camp purposes. Too many names in front of him to have a legitimate shot at making the team.

Rob Jackson, linebacker – Jackson is young and raw, so he’s a logical choice for the practice squad. It would have been a pretty substantial upset for Jackson to beat out Jeremy Jarmon, Lorenzo Alexander or the other remaining linebackers.

Willie Parker, running back – He’s the biggest name on the list, but he’s by no means the biggest surprise. Parker faced on uphill battle, with both Clinton Portis and Larry Johnson ahead of him on the depth chart. None of them play special teams, so one of them had to go.

Chad Rinehart, offensive lineman – The guy could have been cut a year ago and I wouldn’t have had a problem with it. Rinehart is so shaky, that he makes Stephon Heyer look like a Pro Bowler.

Ramzee Robinson, cornerback – Even after Tryon was shipped to Indianapolis, there were simply two many names ahead of Robinson on the depth chart.

Ryan Torain, running back – This one is a little bit of a shocker. Torain was once a highly-regarded draft pick by Mike Shanahan’s Denver Broncos. The two-time Super Bowl winning coach even he went as far as to compare Torain to Terrell Davis. So yeah, if anyone was going to beat out Parker, my money was on him. But Keiland Williams made the cut, while Torain did not.

Lee Vickers, tight end – Chris Cooley and Fred Davis are pretty good at what they do.

Bobby Wade, receiver – Wade has surprisingly solid numbers over the last couple of seasons, but he never fully seized the opportunity here in D.C. It’s one thing to get beat out by Santana Moss. It’s another to lose out to Roydell Williams.