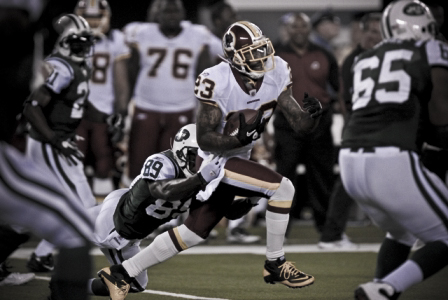 Preseason or not, vanilla offenses and defenses or not, what we’re seeing so far this year is a trend that could really swing things in favor of the Redskins defense.

The Redskins’ aggressive mindset on defense translated to four turnovers against the New York Jets in the team’s 16-11 victory. Instead of sitting back and reacting to what offenses throw at them, as was the preference during the Greg Blache years, Jim Haslett’s 3-4 defense is much more chaotic.

Redskins players love this brand of defense, which has helped the Pittsburgh Steelers win multiple Super Bowls since 2005. They love that blitzes come from all angles in any situation. They love forcing offenses into mistakes rather than passively waiting to be picked apart. They love dictating play. Basically, they’ve already completely bought in.

That was evident when DeAngelo Hall picked off his second pass of the preseason. Or when Phillip Buchanon, who was beaten on a short pass, made up for it by punching the ball free from receiver Santonio Holmes.

Linebacker Robert Henson did the same thing to running back Joe McKnight, dislodging the ball by getting a hand on it, and cornerback Ramsey Robinson recovered it for Washington. And finally, there was defensive lineman Darrion Scott, who forced former Redskins quarterback Mark Brunell into a fumble that was recovered by cornerback Kevin Barnes to effectively seal the win for the burgundy and gold.

After the Jets game, the Redskins entered the weekend tied for first in the NFL with seven forced fumbles and tied for seventh in interceptions with three. If the players continue to have that same aggressive mindset, this could finally be the year turnovers come in waves for the Redskins.

2. “Giving Up The Gun” by Vampire Weekend

Mark Sanchez, the franchise quarterback who Redskins owner Daniel Snyder was smitten with coming out of college, is now a glorified game manager.

Stunning really, when you think about it.

The second-year quarterback, who is surrounded by talented players such as LaDainian Tomlinson, SHonne Greene, Santonio Holmes, Braylon Edwards and more, is now being treated like he’s Trent Dilfer or some other equally mediocre signal caller.

“You have to realize that there are times to take chances and there are times not to,” said Jets coach Rex Ryan of Sanchez. “The way we play defense, kick the field goal, so we’re up.  The way [Jets kicker] Nick [Folk] kicks off; the offense will have to drive 80 yards on us. I think that’s part of it. We don’t need to force passes. We have a good enough offense that the plays will be there. Go through your reads and make throws. He’s not going to be perfect by any stretch.”

I feel obligated to point out that Sanchez is going into just his second season in the NFL, so maybe it’s not wise for his coaching staff to rush to judgment just yet. But I watched from the sidelines as Ryan and friends were terrified to put the ball in his hands at the end of the first half.

There they were, taking timeouts and trying to move the ball quickly during their two-minute drill. Except, Sanchez wasn’t throwing any passes. Instead, he kept handing the ball off on delays. Even if Ryan said otherwise, it was clear by the playcalling that they have zero confidence in Sanchez at the moment.

And maybe it’s because the former USC standout is a little sensitive. We’ve learned that watching Hard Knocks this season. The first-team offense has been missing in action for New York and they needed to keep Sanchez in the game into the fourth quarter, just to get a meaningless touchdown. So maybe there is a method to Ryan’s madness. But it’s just a stunning turn of events for a guy who the Redskins were willing to give up multiple first rounders to acquire.

Speaking of quarterbacks, the Jets game also helped me realize something in regards to the Redskins’ most important position.

If Donovan McNabb goes down for any length of time, we’re looking at a whole lot of “The Rex Cannon” Grossman, John “Mellow Gold” Beck and/or “Tricky” Dick Bartel. And if you think for a second that’s a good thing, you’re insane.

Larry Johnson was awful one week ago. He rushed for just four yards on eight carries while also failing to impress in pass blocking and receiving. He was bad enough to legitimately make me wonder if he’s ever played a worse game in his career.

For that reason, people were rushing to run the guy out of town. After one preseason game against a stellar Baltimore defense that has made everyone look bad for more than a decade now, critics were convinced that Johnson might as well be let go now.

Even Johnson was disappointed with his performance. So much so, he practically begged Shanahan to let him get more reps, even if it meant playing in the fourth quarter (as opposed to a certain disgruntled defensive lineman who threw a hissy fit when he was told to play in the second half of a preseason game).

This time around, Johnson looked much better – finishing with nine carries for 42 yards and a 15-yard touchdown catch that won the game for the Redskins. Preseason or not, it was nice to see the guy who has worked harder than anyone else at Redskins Park this offseason see some success.

Here’s hoping this was just the start of something memorable for Johnson.

This was a moment in the first half when Redskins offensive lineman Artis Hicks was down on the ground, and out of nowhere, Jets linebacker Bart Scott came flying in to shove Hicks from behind.

Next thing you know, a handful of guys from both teams got into a shoving match in a heated exchange that could have gotten ugly.

After the game, I asked Hicks what happened to piss off Scott to that degree.

“You’ll have to tune into Hard Knocks this week to find out,” he said with an ear-to-ear grin on his face.

So I turned to fellow offensive lineman Trent Williams, and asked for his take on the Hicks-Scott dust-up.

“I don’t know exactly what he said, but I know it wasn’t very nice,” Williams said of Hicks. “I told him I’ve never seen that side of him. I liked it. I LIKED it.”

It goes without saying that I will, in fact, be tuning into HBO this Wednesday night to find out exactly happened.