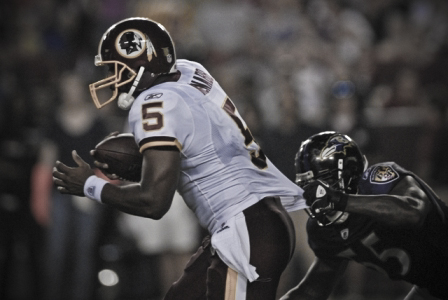 1. “Oh No! Not You Again!” by The Heavy – While many folks would like you to believe that a rivalry exists between the Washington Redskins and the Baltimore Ravens, the truth is there’s nothing there.

The Redskins and their fanbase put plenty of time and energy into despising divisional opponents like Dallas, New York and Philadelphia, while Ravens fans (hon!) focus their hatred towards Pittsburgh. When the Redskins and Ravens square off, both teams obviously want to win, but it’s not like anyone cares about the “battle of the beltway” 10 minutes after the game is over.

Now, that being said, there was one guy prominently involved in this game who has to have strong feelings against Baltimore, and that’s Redskins quarterback Donovan McNabb.

He might not ever say anything publicly, but rest assured that McNabb remembers the last time he faced the Ravens. That’s because he was benched after going just 8-for-18 for 59 yards with two interceptions and a fumble in the first half against Baltimore back on Nov. 23, 2008.

“I thought it might be a little bit of a spark, and we might be able to get some things going,” Eagles head coach Andy Reid said at the time.

Less than two years later, the Eagles said goodbye to McNabb and turned the team over to quarterback Kevin Kolb, who replaced Donovan against Baltimore that day. So yeah, it’s not much of a stretch to believe that seeing the Ravens again could drum up some emotions for the 33-year-old.

How did he fare the second time around? McNabb completed 11 of 26 for 206 yards and an interception in one half of action against a very aggressive Ravens defense. The 206 passing yards were the most a Redskins quarterback has thrown for in a half since 2002.

And honestly, McNabb’s numbers would have been even more impressive if his teammates could catch passes that hit them in the hands. You could go down the list – Fred Davis, Chris Cooley, Larry Johnson and Anthony Armstrong to name a few – all dropped catchable passes in the first half.

Maybe they heard footsteps, maybe one or two of the passes had a higher degree of difficulty, but the bottom line is – if it hits you in the hands, you’ve gotta catch it.

As for McNabb, preseason or not, you’ve got to love his gutsy performance. The man was under siege for much of his evening and he needed ice on his ankle after the game, but he chose to look at the 23-3 loss in a positive light.

“I felt great, I felt great,” he said. “I had a couple of throws I missed, some miscommunications and some balls that we missed. But, the thing about it is, they were opportunity plays. We made some plays throughout this game. We drove the ball and put ourselves in position to score, now we just have to capitalize.”

2. “Who Cares?” by Gnarls Barkley – Brian Orakpo might only be a second-year player, but the man is wise beyond his years. I swear the guy carries himself as a 10-year pro. So after the loss, I sought him out to get his perspective on the game.

The good news is Orakpo wasn’t worried about loss. He openly admitted that the Redskins defense didn’t watch film or gamplan for the Ravens. Unlike Steve Spurrier, who felt the need to use every trick in his bag during the preseason, Jim Haslett is content to go straight vanilla until meaningful games are played.

“I think we matched up pretty well,” Orakpo said. “They had a fluke play. I don’t think they’ll do that in the regular season, with the fake punt to get the ball back on the 1. I think we fared well against them. Obviously, I’m disappointed we lost, but the [starters] were able to get off the field and create turnovers. That’s a goal we emphasize each week, and we did a good job at that.”

I’ve always believed that moral victories are for losers, so there’s no real need to sing the praises of a team that lost by 20 points – preseason or not. But a few players did manage to have a solid game.

In addition to McNabb, the coaches should also be pleased with Armstrong, Santana Moss and Justin Tryon, who all stood out during an otherwise forgettable evening.

3. “Prove Yourself” by Radiohead – I mentioned Larry Johnson earlier, and in fact, his name has been brought up quite frequently since he came to town this offseason. The truth is, he and Davis have been the two best players on the practice field since Mike Shanahan came to town.

But Johnson’s debut – four yards on eight carries – is not exactly the kind of coming out party you’d expect from a guy who has been turning heads on a daily basis in practice.

The Redskins didn’t exactly have ideal field position when Johnson was handed the ball and the blocking in front of him wasn’t all that great, but don’t expect Johnson to make excuses about his lackluster performance.

“No matter where you are on the field you still want to run your offense,” he said. “Backed up is backed up. When you start making plays and moving the ball a little bit you’ve got to continue to do that. This one was tough. This wasn’t going to be like last week.  I think we got a rude awakening thinking it was going to be like last week. This is definitely a playoff or Super Bowl team, when you play against their defense that’s what you expect them to bring.”

Few teams in the NFL are as stout defensively as the Ravens. Even after Johnson left the game, Baltimore’s defense shut down the Redskins’ ground game – allowing just 25 rushing yards on 14 carries for the game.

Johnson is eager to show critics he can still be a productive back in this league and, for my money, this dud will only continue to fuel him moving forward.

“It’s good that its preseason and we can try to fix some things that we need to fix on the offense as far as our game,” he said. “Me, personally, I’ll fix some things next week and play better.”

4. “Trouble Comes Running” by Spoon – Preseason games are meaningless. While coaches enjoy the extra time to evaluate players fighting for the last few available roster spots, they are typically clunky games played by guys who won’t be in the league in a month.

As if that’s not bad enough, they also present plenty of opportunities for injury. Thankfully, the Redskins made it out of their preseason opener against Buffalo relatively healthy. Unfortunately, the team wasn’t nearly as lucky the second time around.

All four of these starters figure to play a prominent role for the Redskins this season and you hate to see them injured in a meaningless exhibition. Out of the four, Moore’s injury appears to be the most serious – with reports suggesting he could be out for four to six weeks.

The play Moore referred to was the fake punt. So yeah, the Redskins quite possibly lost a starting safety thanks to a gimmick play in a game that doesn’t matter. Can you tell how thrilled I am?

5. “On to the Next One” by Jay-Z – For anyone following me on Twitter, the most enjoyable subplot during the Redskins-Ravens game was tight end Chris Cooley. Or more accurately, Cooley’s boredom.

At the start of the second half, Cooley, with a bottle of Coke in his hand, walked up to me on the sideline while I was taking photos and started chatting with me.

His pads were off, meaning he was done for the night, and Cooley was clearly looking for some kind of shiny object to catch his attention until the game was over. If he wasn’t one of the most recognizable athletes in town, you would have sworn he was a fan who had snuck his way to the sidelines.

After chatting with me for a minute, he finished his beverage and then shot it basketball style towards a trashcan 20 or so feet away. He missed. A few minutes later, Cooley found me again on the other end of the field and now he had a football in his possession.

At this point, I suggested that, since he’s listed as the team’s backup kicker, Cooley should take a few practice kicks into net. Next thing you know, Cooley was over chatting with kicker Graham Gano about it.

Sadly, Cooley didn’t take me up on the suggestion, but there’s still plenty of time left in the preseason. Maybe next time.