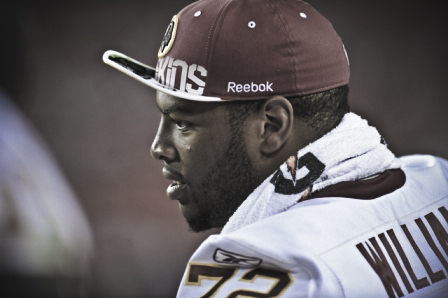 While many focused on the debuts of Mike Shanahan and Donovan McNabb, my attention was drawn elsewhere as the Washington Redskins faced the Buffalo Bills in their preseason opener.

More than anything, I was interested in seeing how rookie left tackle Trent Williams handled the first real challenge of his professional career. Its one thing to go against teammates in practice, but it’s a completely different animal when you’re thrown into action against a hungry opponent.

Well, it took just three offensive plays for Williams to leave a lasting impression on me.

Williams will undoubtedly have several highs and lows as he settles into one of the most challenging positions in sports, but the Oklahoma product showed what he’s made of during that first drive.

The Redskins faced 3rd-and-8 on their own 18-yard line. As the ball was snapped, Bills linebacker Aaron Maybin, the 11th pick in the 2009 NFL draft, kicked it into high gear in pursuit of quarterback Donovan McNabb.

While Maybin, who is 6-4 and 250 lbs., is much smaller and quicker than Williams, the left tackle had no issue keeping up with the Bills’ speed rusher and continued to steer him further and further away from his quarterback.

McNabb, with all the time in the world, connected with tight end Chris Cooley for an 11-yard gain to keep the drive alive. And by the time the play was over, Maybin was at least 10 yards away from McNabb.

If this was a sign of things to come, then it’s safe to say the Redskins made the right decision drafting Williams as the successor to perennial Pro Bowler Chris Samuels. I caught up with Williams this week to get his thoughts on his Redskins debut.

“I feel really good now that I got that first one out of the way,” Williams said. “It was really nerve racking. But it feels great now that it’s over.”

Now that you’ve had a couple of days to watch film and break down the Bills game, how do you think you did?

“I think I did okay,” he said. “Nothing amazing and I can definitely do better, but I think I did okay for my first game. I thought after I got the first play over with that I would settle down, but I was still nervous the whole game.”

For what it’s worth, you didn’t really look nervous or out of place out there …

“Yeah, but as long as McNabb is in there, I was walking on egg shells,” Williams said. “He’s so vital to our franchise. We don’t want nobody to lay a finger on him.”

That’s exactly what it looked like you were doing out there on that first third down when you absolutely owned Aaron Maybin. What’s your mindset on a play like that when a smaller guy like that is trying to blow by you?

“I’m just trying to wall him off from the quarterback,” he said. “He’s trying to use his speed and I’m trying to use mine to not let him get to Donovan. It felt pretty good, but I am always looking for ways to get better.”

Moving forward, what do you feel you need to work on the rest of this preseason?

“I want to get better at knowing all of my assignments and reacting to all of the defensive fronts we see,” Williams said. “But that will all come with playing more. All in all, I think I did already for my first game.”

In your final year of college, you were the lone holdover on Oklahoma’s offensive line after the other four linemen all moved on. Scouts praised your mental toughness for being able to handle such adversity in an area that almost always needs stability in order to flourish. What was it like working with four new guys and trying to build a cohesive unit essentially on the fly?

“It was tough, man,” Williams said. “I played that whole year at about 70 percent. I was always dealing with some kind of nagging injury, but it was my senior year and I wanted to push through it even though we had a young offensive line. I feel like we really did the best we could with all of the injuries we had.”

We talked about mental toughness. What else does it take to make it at the pro level?

“It takes a lot of attention to detail and you’ve really got to watch a lot of film,” he said. “Film is like the lifeline in the NFL. That’s the key to everything – seeing what you did right and what you need to work on. And also, you need perseverance. You’re gonna face adversity. You’re gonna face someone that’s bigger, stronger and faster than you. But it’s about how you handle it – not just your physical abilities.”

You’ve only been here for a little while now and you’re already sounding like Shanahan as you stress the importance of attention to detail and stuff like that. What is it about this guy’s system that takes offensive linemen to that next level?

(Laughs.) “You know what, I think if everybody knew, then they’d all be trying to copy it,” Williams said. “With his system, he’s just got that recipe. He knows what it takes to be great and he puts his players in the best place to succeed.”

Everyone knows that Williams has tons of potential and athletic ability, but some critics want to see how Williams responds now that he can’t get by on sheer talent alone. Talking with Doug Farrar out the Football Outsiders, he strongly believes that the best thing that could have happened to Williams was playing for Shanahan.

That’s because Shanahan’s system has always brought the best out of his linemen, and also, because the coach won’t hesitate to pull a rookie aside if he thinks he’s not giving maximum effort.

Which is why I couldn’t help but smile as while listening to Williams preach the important of film study. He already admits that there are bigger, stronger and faster players in the league, so his plan is to do everything within his power to protect his quarterback’s blindside.

Instead of skating by on reputation or athletic ability, Williams is eager to improve as a player – both on the field and in his preparation. As long as he keeps that mindset, the Redskins and their fanbase have to feel pretty good about the future.