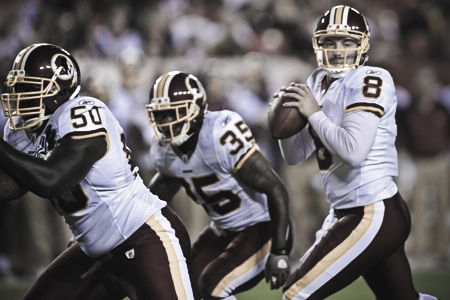 Preseason or not, the Washington Redskins put together one of their most inspired performances in recent history with their 42-17 thumping of the Buffalo Bills Friday night.

In the debut of head coach Mike Shanahan and quarterback Donovan McNabb, the Redskins had little trouble moving the ball on offense, they created constant pressure on defense and special teams, for the first time in seemingly decades, tilted the field in favor of the burgundy and gold.

McNabb was solid, completing five of eight passes for 58 yards and a touchdown in limited action. The 33-year-old even surprised a few folks by keeping the team’s second drive alive with his legs – something Philly fans were convinced he could no longer do.

Once the six-time Pro Bowler was done for the night, backup quarterback Rex Grossman saw his first action as a member of the Redskins. And if McNabb was good, then “The Rex Cannon” was great.

Having spent last season in Houston with Kyle Shanahan, it was readily apparent that Grossman has already found a comfort level in this offense. The only thing prettier than Rex’s first touchdown pass – a nine-yard dart to tight end Fred Davis in the second quarter – was his second touchdown.

On that play, Grossman was able to do something rarely seen during the Jason Campbell era – display touch and accuracy on a deep ball – dropping a 44-yard bomb into the waiting arms of receiver Devin Thomas to effectively end the competitive portion of the evening at 35-3.

If McNabb is ever forced out of action for any length of time this season, ‘Skins fans can only hope that Grossman is able to replicate his performance on this night. And if Grossman goes all Colt Brennan on us – playing lights out in his debut and never coming close to that level again – well, at least Hawaii will love him.

Jim Haslett’s 3-4 defense was equally impressive against Buffalo. While keeping things admittedly “vanilla,” the Redskins were able to pressure Bills quarterbacks to the point that even disgruntled defensive lineman Albert Haynesworth was impressed with the showing.

And special teams … wow. What can I say?

Someone allegedly named Brandon Banks came out of nowhere and is now the talk of the town, after busting out a 77-yard punt return for a touchdown. The undrafted rookie out of Kansas State finished the game with four returns for 97 yards and a touchdown.

To put those numbers in proper context, Antwaan Randle El finished the 2009 season with 17 punt returns for 102 yards. In 90 attempts over the last three seasons, Randle El never returned a punt for a touchdown and his longest return was 43 yards.

So basically, on Banks’ next punt return, he’ll likely match Randle El’s production for an entire year. Whether that says more about Banks or Randle El is your call.

In short, the preseason opener was everything ‘Skins fans could have ever hoped for. The stadium was rocking, the new high-definition video boards were a dream come true and the Redskins actually resembled a competent football team for the first time since Joe Gibbs said goodbye.

Here’s the thing though – none of it matters.