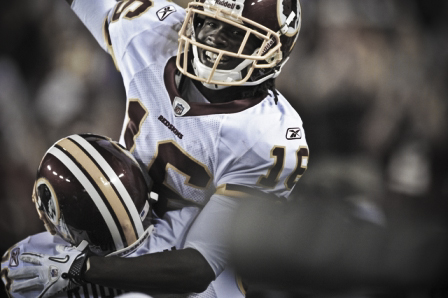 Yes, I know that Donovan McNabb and Mike Shanahan have been with the Washington Redskins for a few months now. And yes, I’ve seen them both at countless practices and camps since their respective arrivals. But I’ve still got to admit, it was surreal seeing them both rocking the burgundy and gold Friday night against the Buffalo Bills.

Apparently I wasn’t the only one who needed an extra second to adjust to it all either.

“When I came out of the tunnel it really hit me that, obviously, it is a new uniform, new scenery, and a new team,” McNabb said. “The exciting thing about it is that guys came in here just excited. Everybody wanted to see everybody get out there and make plays in game situations and I think we were able to show that. The most exciting part is putting up points, eating up yards, getting Redskins turnovers and special teams scoring points. I think you are seeing a whole new different ball club than you are used to seeing in the previous seasons. We don’t want to get too overly excited.”

In his preseason debut, McNabb completed five of eight passes for 58 yards with one touchdown. In limited action, he finished with a passer rating of 124, and even at 33-years-old, managed to outrace a Bills defender or two during a third-down scramble during the team’s second drive.

‘Skins fans still aren’t completely sure what the team has in terms of depth at receiver, but it didn’t hinder McNabb against the Bills. He just dropped back, picked his target and fired passes without hesitation. Whether it was Roydell Williams, Chris Cooley or Anthony Armstrong, if they were open, the ball came their way.

If this is a sign or things to come in 2010, then now might be a good time for you to start working on getting tickets. This Redskins offense might finally be capable of keeping up with the defense.

The Redskins moved the ball on offense. They created pressure and forced turnovers on defense. Hell, even the special teams unit managed to recover from receiver Devin Thomas’ opening kickoff gaffe to tilt the field in Washington’s favor.

Regardless of whether they played a mediocre Buffalo squad or some junior college from South Dakota, the Redskins looked sharp for long stretches of the game and dictated play in all three phases of the game.

It was 35-3 before the Bills backups made the score a little more respectable against the Redskins backups. The 42 points were the most a Redskins team has scored in the preseason since 1988. There was a lot to like and plenty of preventable mistakes the coaches can focus on this week in practice to keep the players humble and hungry.

“We played with lots of effort today,” Shanahan said. “I thought, overall, we got a chance to evaluate a lot of people – first, second, third and even fifth stringers. I thought we gave some good effort. I thought we played well and other times not so well, but it was a good first game and hopefully we can build from here.”

3. “Sexy Back,” by Justin Timberlake

Sexy Rexy. The Sex Cannon. Money in the bank.

It doesn’t matter what name you call Rex Grossman, as long as you call him the Redskins’ backup. Seriously, the coaching staff can cut John Beck and “Tricky” Dick Bartel now. Shanahan typically only keeps two quarterbacks and it’s clear that Grossman, with an extra year in the Kyle Shanahan offense, is light years ahead of the other guys.

Grossman’s first touchdown pass, a bullet to tight end Fred Davis, was a throw I didn’t even know the guy could still make. His second touchdown pass, a 44-yard bomb that hit Thomas in stride to effectively end the competitive portion of the game, was even better.

I haven’t been thrilled with Grossman’s performance during training camp, but he was the best player on the field for the preseason opener.

“I was pleased with Rex,” said Mike Shanahan. “He went in there and executed the offense well. He was put in some tough situations and I was pleased with the way he stood in there. Like all quarterbacks, they are always looking for a couple of plays here and there, but overall, I thought he had a good game.”

After suffering through four years worth of fair catches from Antwaan Randle El, I was downright emotional watching someone named Brandon Banks take a Brian Moorman punt 77 yards for a touchdown.

As far as I’m concerned, the undrafted rookie out of Kansas State who is generously listed at 5-7 and 155 lbs., earned a spot on the final 53-man roster with that one magical punt return. For those who might not agree, let me put things in perspective.

Banks finished the game with four returns for 97 yards and a touchdown. Randle El finished the 2009 season with 17 punt returns for 102 yards. He didn’t score on a single punt return in his last three seasons with Washington (90 attempts) and his longest return during that span was 43 yards.

So yeah, preseason or not, Banks clearly provides something the Redskins have lacked in recent history. And if he’s able to do it again at any point during the 2010 season, please forgive me if I run onto the field and hug the little guy. I’m just not used to seeing my favorite football team score points on special teams.

This one goes out to the new “punter-proof” high-definition video boards at FedEx Field. Those bad boys are the real deal. As in, they are so nice that Redskins players could be seen regularly looking up after each snap to see how they fared on the replay.

Whether you’re on the field or in the nosebleeds, there isn’t a bad view of those HD beauties. FedEx Field might have a long way to go before it can compete with some of the best stadiums the NFL has to offer, but that $20 million upgrade was a huge first step.