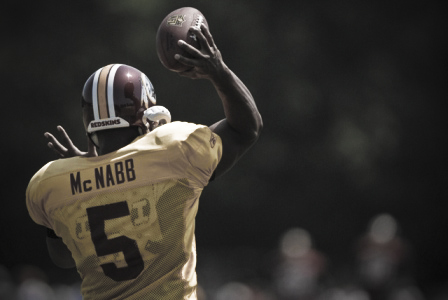 The second week of training camp has come and gone and the Washington Redskins are a little more than 24 hours away from their first preseason game of the season.

With that in mind, here is the second edition of the Redskins power rankings. In case you missed last week’s offering, the concept is simple – 10 Redskins players who have risen to the challenge and made a strong impression during Week 2 of training camp, along with five guys who need to step it up.

And my disclaimer: these rankings are completely subjective, biased and, ultimately, meaningless. They simply represent one person’s take from the sidelines. If you see things differently and/or feel like I’m forgetting someone, that’s okay. Feel free to leave a comment and share your thoughts on the subject.

1. Donovan McNabb, quarterback – Ask anyone from Philadelphia capable of having a coherent conversation (which admittedly, doesn’t leave many options to choose from) – McLovin’ is a notoriously poor practice player. The guy has been a consistent winner throughout his NFL career, but that success rarely carries over to practice situations. And honestly, that’s fine.

Nothing against Taylor Jacobs, but I’d much rather have a top 10 talent who is a so-so practice player, than the opposite. But McNabb earns the top spot this week because he’s managed to put together a string of solid performances over the last seven days, which hopefully means he’s getting more comfortable in this new offense.

Either way, McNabb is making enough noise these days that the mere sight of his Redskins jersey is enough to make Andy Reid call for security.

2. Carlos Rogers, cornerback – I keep saying it and skeptics keep mocking me. This is going to be a career year for Rogers. With his good pal Fred Smoot no longer around to distract him, Rogers is spending more time focusing on the subtle nuances of playing one of football’s most challenging positions and less time smoking and joking.

3. Trent Williams, offensive lineman – He’s already solidified his place as the starting left tackle and his coaches continue to sing his praises. As soon as his head catches up with his natural athletic ability, this guy is going to be a stud for a long, long time.

4. Adam Carriker, defensive end – Carriker is starting to look very comfortable in Jim Haslett’s defense. Oh, and he’s got a healthy chip on his shoulder because he wants to prove St. Louis was foolish for giving up on him. Feel free to start getting excited over what a healthy and motivated Carriker can provide for this aggressive defense.

5. Andre Carter, linebacker – Folks kept telling me throughout the offseason that there wasn’t a place for Carter in a 3-4 defense, and that it was only a matter of time before he was either traded or let go. And I kept telling those people that they didn’t know what they were talking about and that not all 3-4 defenses are created equally. Once Carter fully recovered from offseason surgery to repair his torn bicep muscle [Editor’s note: ouch.], he found himself below Lorenzo Alexander on the depth chart as he worked back to speed with the second teamers.

Carter never said a word. He simply kept a positive attitude and continued to do whatever was asked of him. In related news, Carter has leapfrogged Alexander and has spent the last week running with the starters.

6. Chris Cooley, tight end – He’s not fast. He’s not flashy. But dammit, you know what you’re getting with Chris Cooley. And for that reason alone, you’ve got to respect him. Cooley looked off the first week of training camp, with more than a few passes hitting him in the hands that he failed to secure. This past week though, Cooley has seemingly started to develop some chemistry with McNabb and looks much more like the Pro Bowler fans love to love. Let’s put it this way – it wouldn’t surprise me at all if Cooley was the team leader in receptions this season.

7. Clinton Portis/Larry Johnson, running back – Look, I’ve been raving about Johnson seemingly since the moment he donned the burgundy and gold. At this point most folks know I think he could have a very solid year as the goal line/short-yardage back in this offense. But Portis continues to be the primary ball carrier and over the last week has begun to earn some attention in his own right.

Let’s remember that Portis enjoys practicing roughly as much as Allen Iverson. So him doing anything to earn his coaches praise during training camp is noteworthy. Bottom line: if these two guys can feed off of each other, then a lot of ‘Skins fans will jump on board the Porta-John bandwagon.

8. Selvish Capers, offensive lineman – Some folks might tend to overlook Capers because he was the 231st selection in the 2010 NFL draft, but those individuals would be foolish. Regardless of what round he went in, Capers is an athletic tackle who excelled at protecting his quarterback’s blindside during his time at West Virginia. His biggest adjustment these days is getting used to a right-handed quarterback, as opposed to a leftie like in college. But if this past week is any indication, he’s well on his way to being a dependable option.

9. Byron Westbrook, cornerback – Westbrook makes the list solely on the merits of his outstanding effort during Fan Appreciation Day. The 25-year-old had two beautiful interceptions that day and, even if he took the rest of the week off, forced the coaches to reconsider using him as something more than a special teams contributor.

10. Joey Galloway, receiver – The guy is seven years older than his offensive coordinator. He’s got 20 catches for 205 yards and zero touchdowns over the last two seasons. He hasn’t played a full 16 game season since 2006. And yet, if the regular season started today, he’d be a starter. There’s something to be said for the quiet professional who shows up every day and simply does what is asked of him.

Honorable mention: Fred Davis, tight end, and Kareem Moore, safety – These two are still bringing their “A game,” I just thought I should bump them down to give some other guys a chance to earn some recognition.

5. Jammal Brown, offensive lineman – You know how the Redskins have a track record of acquiring big-name players with impressive resumes? And you know how the majority of those high-profile additions get to town and never return to that elite status? Yeah. Well, I’m not rushing to put Brown in that category before he even plays his first game at FedEx Field, but the thought has crossed my mind once or twice while I’m waiting for him to get healthy enough to actually take the field.

4. Justin Tryon, cornerback – I’m still waiting for Darrell Green’s apology on this one. For the second offseason in a row, he raved about Tryon’s improvements and for the second year in a row, it appears there was a lot of talk and not much substance. Now his protégé is behind Phillip Buchanon and Kevin Barnes on the team’s depth chart, and Tryon hasn’t really done anything in practice to warrant a reshuffling of the lineup.

3. Willie Parker, running back – While Portis and Johnson have both stepped up their games, the same cannot be said about Parker. When he first signed with the Redskins, I thought he’d be the perfect second option. I envisioned him in a Ladell Betts-type role, but with an extra gear in the speed department. Um … yeah. Looks like I was wrong on that one.

Parker hasn’t shown me anything since then, while Ryan Torain, who head coach Mike Shanahan once called “the next Terrell Davis,” has looked much more compatible in this offense. Torain is young, has better hands and can play special teams. That means he’s bringing a lot more to the table than Parker.

2. Artis Hicks, offensive lineman – With “Big” Mike Williams done for the year, the Redskins are hoping and praying that Hicks can step up and help solidify the offensive line. ‘Skins fans might not have known much about him before his arrival, but he’s easily one of the most vital additions this offseason. If he plays well, then everyone in town rejoices. If not … well … let’s not think about the worst-case scenario (which, as you know, rhymes with “Stephon Meyer”).

That being said, Hicks hasn’t always looked like a sure thing out there. In fact, during one-on-one drills on Fan Appreciation Day, Kedric Golston blew by him with such ease that I had to double check to make sure it was actually Golston. Nothing against the guy, but I don’t expect to see him going all DeMarcus Ware on someone lining up as a starting offensive lineman. For that reason, Hicks is someone I will be paying close attention to when the Buffalo Bills come to town.

1. Devin Thomas, receiver – It pains me to put Thomas here because I like the guy and I think he can be a productive receiver at the pro level. But it’s really starting to look like Shanahan is losing patience waiting for the third-year receiver to get to that level. Thomas current sits fifth on the team’s depth chart, which is troubling because the receiver position is easily the biggest concern the Redskins have these days.

I’ve said all along the difference between Thomas and Malcolm Kelly has been opportunity and injury. Thomas has been given plenty of opportunity, while Kelly has been saddled by injuries. If Thomas doesn’t make it, he’s only got himself to blame.