getting to know adam carriker 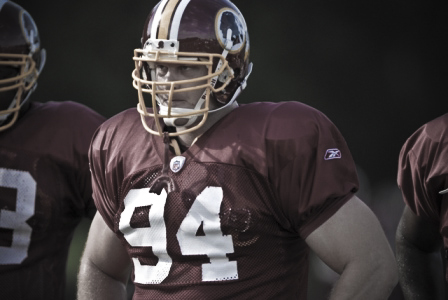 Back in April, the Washington Redskins made a low-risk, high-reward move – trading away a fifth and seventh round draft pick in this year’s NFL draft to the St. Louis Rams for defensive end Adam Carriker.

The trade reunited the 26-year-old, who was the 13th pick in the 2007 NFL draft, with his former coach Jim Haslett – who now serves as the defensive coordinator in Washington.

Carriker missed the 2009 season because of a shoulder injury, but he’s fully recovered and has been one of the team’s standouts so far this offseason.

We caught up with the Nebraska Cornhusker this week to find out a little more about him and to get his perspective on his time in St. Louis.

How’s everything coming along as you settle in with your new team?

“I think it’s going really well,” he said. “The scheme fits me pretty good and I love my new teammates already, to be honest with you. They’re a bunch of good, hard-working guys.”

You mentioned the scheme. What’s your initial impression of this 3-4 defense all of us are excited to see in action?

“You know, we’re watching film and defenses are typically ahead of offenses this time of the year,” Carriker said. “But man, if we’re able to do this during the regular season, it’s going to be a big year for our defense.”

This is a defense that has finished in the top 10 pretty consistently over the last decade. The biggest issue has been a lack of turnovers. Are you seeing anything out there that makes you think this year is going to be different?

What’s the scouting report on Adam Carriker, for those local fans who may not know much about you?

What happened in St. Louis? Why do you think they decided to let you go?

“To be honest with you, I just went through a lot of injuries,” he said. “You can ask the strength coach, you can ask the trainers there in St. Louis, nobody put in more time in the weight room than me. But for some reason, I was unlucky.”

And they grew impatient with you?

“I mean, I don’t know how else to describe it,” Carriker said. “If you keep getting hurt over and over and over. It’s not like I was asking people to back over me with a truck or anything like that. It just happened.”

You were the 13th pick in the 2007 NFL draft. I just can’t imagine cutting the cord on someone like that so quickly …

“It’s kind of funny, but when I first came out, people were saying, “He can play anywhere. He can play nose tackle, left end, wherever. And when the new coach sat me down, he told me I was too slow to play left end and too tall to play inside. Like all the sudden, it became a bad thing that I could play all these different positions. It’s just funny how different people can view something.”

I’ve always believe the more you can do for a team, the harder it is to get rid of you. That sounds like your mindset too, right?

“I’ll never forget my rookie year,” Carriker said. “I would play nose tackle, right and left end. I would play it all. In one drive against San Francisco, I played every single position. I didn’t have a lot of time to think, but I thought I did it pretty well.”

The longer Carriker stands out as one of the team’s top performers, the more this move looks like a steal for the Redskins. Carriker is convinced his downfall with the Rams was a case of bad luck. Needless to say, if he stays healthy and earns a spot in the starting lineup, then he was well worth a fifth and seventh rounder.