can thomas be as productive on the field? 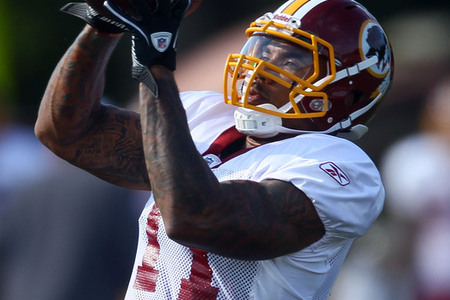 While the award for least productive offseason by a member of the Washington Redskins goes to defensive/nose/disgruntled tackle Albert Haynesworth in a landslide, not everyone in the burgundy and gold followed the same script.

Let’s see: The front office was busy emulating their favorite Extreme Makeover episodes, the head coach and the offensive coordinator were re-enacting The Apprentice and the quarterback took a handful of his teammates to Hell’s Kitchen … er … Hell Week.

But the player who had the busiest offseason was receiver Devin Thomas, who has officially become the Snoop Dogg of the Redskins roster (which, to put it kindly, means he’ll happily show up anywhere there’s a combination of hot chicks, video cameras and a party atmosphere.)

Here’s a quick rundown of everywhere Thomas has appeared since the 2009 season mercifully ended:

Simply put – every time you read an article this offseason about a Redskins player that didn’t use phrases such as “unhappy,” “nose tackle,” or “lawsuit,” chances are it was about Thomas.

So it should come as no surprise that, on the first day of training camp, I was joking with a handful of Redskins players about filming a music video for my soon-to-be-release musical debut titled, “Sportsboyz II Men,” Santana Moss cheerfully jumped in and said, “Talk to Devin. He’s our diva.”

With all that in mind, I had to catch up with the diva. If for no other reason than to see how one player can juggle so many different extracurricular activities while also trying to absorb an entirely new offense.

Brian Murphy: How was your offseason?

Devin Thomas: It’s been great. I’ve been working hard, man. Doing what I need to do and doing a little bit of fun stuff on the side also. It’s been exciting and there’s been a lot of big stuff happening with me.

Murf: I understand your mindset that this is a “put up or shut up” season for you and that you’re convinced you can work hard and play hard at the same time. But there are definitely critics out there who see you doing the modeling stuff, the music video, photos of you out at nightclubs and they’re asking if your priorities aren’t out of whack with all of these possible distractions. What do you say to those people?