bobby wade is here to stay 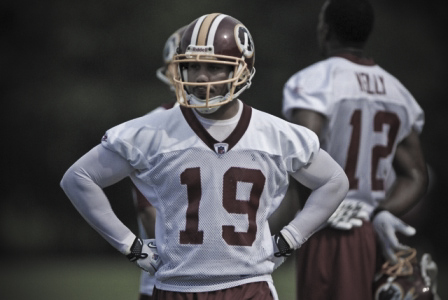 Training camp is here for the Washington Redskins and head coach Mike Shanahan has said all along that the only player on the roster not competing for a job is starting quarterback Donovan McNabb.

With the depth chart wide open, players know they must bring their “A game” daily or risk losing playing time to a teammate who was able to seize the opportunity.

Out of every position on the roster, wide receiver just might be the most wide open position – with 11 players vying to make the final 53-man roster.

While players such as Santana Moss, Devin Thomas and Malcolm Kelly have been around a while, there are also youngsters such as Anthony Armstrong, Terrence Austin, Brandon Banks and Shay Hodge hoping to do enough to stick around. And then there are veterans like Joey Galloway, Mike Furrey, Roydell Williams and Bobby Wade, who are each trying to stick around a little while longer.

Out of all of the new faces competing for the job at wide out, it’s the last name that is most intriguing to me.

Over the last four seasons, Wade has averaged 44 catches for 530 yards and two touchdowns a year while playing in Tennessee, Minnesota and, most recently, Kansas City.

If Wade makes the final roster and is able to post similar stats, he’d give the team the same basic production as Antwaan Randle El (50 catches, 530 yards and zero touchdowns) for a fraction of the cost.

Wade has been around a while and knows what it takes to make it at this level, but he’s only 29 years old. That might give him a leg up on someone like 38-year-old Galloway, who is just one year younger than Keenan McCardell – the Redskins’ receivers coach.

After starting out training camp with a string of solid outings, I caught up with Wade over the weekend. He’s someone who has a solid track record over his eight-year career, but he’s also someone who ‘Skins fans have heard very little about or from since his arrival.

How’s everything going out there?

“It’s been good,” Wade said. “I’m trying to get the timing down and we’re just now getting back into pads for the first time in a long time. That always adds an extra five or six pounds on you, but I caught the ball well. I made a few mistakes, but that’s what training camp is all about – trying to get it right.”

With 11 receivers currently on the roster, how does one guy stand out above the rest?

“You’ve just got to make the plays,” he said. “When the opportunities are there, you’ve got to capitalize on them. There are a lot of things you can’t control. You can’t focus on them. But the things you can control are how you play and the effort you put out when you get those opportunities.”

You’re someone I consider a sneaky veteran. Looking at your numbers over the last few seasons, you’ve been under the radar, but you’ve been fairly consistent wherever you’ve been. What can you bring to the Redskins if you make this team?

“You know, that’s exactly it,” Wade said. “I want to be that guy who does everything right every single time. I want to bring that consistency, so coaches and quarterbacks know what they can expect from me week to week. I’m going to play my hardest and make every play that I get a chance to make and continue to roll like that.”

What’s your early impression of the Washington Redskins?

“Oh man, I love this organization,” he said. “I’ve always had a passion to play for an owner who puts his heart into his team and someone who believes in his players. Not only that, but I love playing for a general manager like Bruce Allen and you know all about Mike Shanahan. His reputation is huge and his staff is one of the best you could ever have an opportunity to play with.”

Donovan McNabb is probably the best quarterback this franchise has had in 20 years. What do you see from the guy out there on the field?

“I see exactly what you said – he’s a pro,” Wade said. “He’s a guy who comes out every single day and tries to put his best foot forward. He’s not missing an opportunities and he wants to try and get better every day. Regardless of what he’s done in the past – with all of the accolades and everything – he still finds a way to humble himself and tries to find ways to get better.”

For much of the last decade, the defense has been the strong suit of the Redskins while the offense has often struggled to put points on the board consistently. What are you seeing out there that makes you think this season will be any different for the offense?

“I definitely think it’s going to be different and it starts with the offensive coordinator,” he said. “Kyle Shanahan is a guy who has been able to accomplish a lot in these last three years. He’s been able to take over a group that was pretty mediocre and took them to the top. So it starts with him, and then obviously, there’s Donovan McNabb. The most important position of the field is quarterback. The offensive line, I think, is a strong group and they seem to be gelling well together. The running backs, with all the names we’ve got back there, you know they’re going to be good. And then it’s just about the receivers stepping up.”

I’ve heard from a few guys about Kyle Shanahan this offseason, and they keep saying he’s full of energy that you can’t help but feed off of and that he’s looking for ballers. What exactly does he mean by that?

“That’s just about guys making plays,” Wade said. “You’ve got a lot of coaches who are all about the X’s and O’s, being on the spots and everything. Well, he’s got a lot of that in him and he wants things done the right way, but when push comes to shove, he just wants guys who can make plays. That plays to a lot of our strengths. We’ve got some guys who have plenty of experience and when they’re given those opportunities, they have a chance to shine. This offense allows us to do that.”

So tell me right now that when the 53-man roster is announced, you’re going to still be here.

“Yes sir,” he said without hesitation. “No doubt about it.”

What do you have to do to ensure that’s what happens?

“I just have to continue to play my best,” Wade said. “There’s a lot I can’t control and I’ve been in a number of situations where I felt like I was guaranteed to make the 53-man roster and didn’t make it. Nothing is guaranteed in this league. The minute you think it is, is when it all gets pulled out from under you.

“For me, it’s about seizing any opportunity I get,” he continued. “Whether it’s with the first group or the fifth group, I’ve got to make the plays I get a chance to make. Other things like the numbers or who gets drafted or traded, I can’t control. That’s way out of my hands. All I can do is put my best foot forward and hopefully they see it.”