kelly: it’s time to put up or shut up 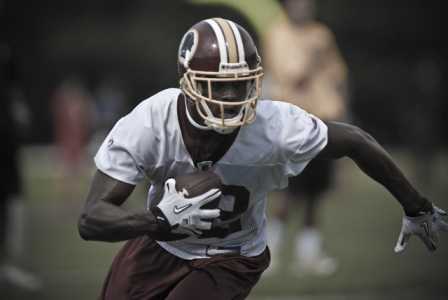 Sometimes I can’t help but think that Washington Redskins wide receiver Malcolm Kelly simply cannot catch a break. I mean, every time I think he’s poised to take a step forward and show his team what he’s truly capable of, the guy pulls or tweaks something and is forced out of action.

While I am a big fan of fellow third-year receiver Devin Thomas, I can’t help but think that the biggest difference between him and Kelly is opportunity and injury. Thomas has been given an opportunity to showcase his talent, while Kelly keeps getting held back by untimely injuries.

This week, in fact, rumors were swirling that Kelly injured himself yet again, this time it was a hamstring injury while working out with Donovan McNabb and friends out in Arizona during something called “Hell Week.” Team officials apparently even considered holding Kelly out of a practice or two at the start of training camp to ensure he didn’t make it worse.

But thankfully for ‘Skins fans, it never got to that. When practice started, Kelly was on the field and he participated fully. Once day one was in the books, I caught up with the 23-year-old to figure out what really happened out in Arizona.

“We were all out there working out and we were working on throwing and catching with Donovan,” Kelly said. “The first day though, I kind of tweaked it. The next few days, I just rested it, you know. It ended up being all good and I was able to go today. We’ll just have to wait and see how it carries over to tomorrow.”

How did you feel out there today?

“It felt good,” he said. “When I went, I went full speed and then I just started to tire out a little bit.”

Was the “Hell Week” experience worth it?

“Oh, definitely,” Kelly said. “Anytime you can get with your quarterback in his environment and it’s not about football … well, it appeared that it was all about football, but at the end of the day, we were all chillin’. It all worked out pretty good.”

So do things feel any different between you guys and McNabb after Arizona?

“Yeah, they did,” he said. “Even Santana [Moss] was saying it’s more like a rehearsal now that we did it last week. It was good. It all worked out for the best.”

“He does and I love him, dawg,” Kelly said. “Because he’s got an aggressive mentality and he’s not conservative. That’s something that’s new for me.”

[Editor’s note: I wonder who Kelly could be referring to?]

“He doesn’t care if we’re backed up on the two-yard line,” he continued. “His first play might be a bomb out of the endzone. It’s just totally different.”

What stands out to me is that he encourages his receivers to play the position like they’re playing basketball. If you run your route and you’re covered, he wants you to do what you’ve got to in order to get open. That’s not something you hear in football everyday, is it?

As someone who has had their route running questioned before, does that mindset make it easier or harder on you?

A little birdy in the locker room told me that head coach Mike Shanahan believes you have the best hands out of any receiver on this team. Is that true?

“Hey, if coach Shanahan says that, I’m not gonna say anything different,” Kelly said with a laugh. “I’ll take a guy like that at his word. I wouldn’t say that myself, but it’s all good.”

Modesty is a good thing. I’ve been on record for a while now that all you need is an opportunity and you’re going to show folks you’ve got what it takes to make it in this league. I mean, this is your “put up or shut up” year, right?

Like I said in my 10 (semi-) bold predictions before the start of training camp, I really can’t see the Redskins cutting Kelly. Yes, he’s battled more than his fair share of injuries, but he’s also shown flashes that if he can stay healthy, he can contribute on offense. And honestly, when his head coach is endorsing him as the best hands on the team, then something drastic would have to happen for Shanahan to have a change of heart and decide his offense is better off without him.

But whether he starts the season as the second receiver or the fifth, one thing is for sure – there’s no more room for excuses.

Either he gets out there on the football field and shows he can be a reliable target or the Redskins will have no choice but to turn to someone else. Here’s hoping it doesn’t have to come to that.