what if vinny cerrato never left? 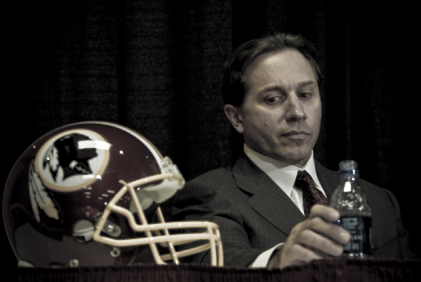 [Editor’s note: As you know by now, I’ve started writing a weekly sports column for SB Nation DC. Every Tuesday, my contribution to society (or at least the D.C. sports scene) is located over there.]

True story: this past weekend I was forced to face one of my biggest fears in life as I boarded a flight from Chicago back to Washington, D.C.

No, it had nothing to do with a fear of flying or claustrophobia. It was much, much worse.

It was Vinny Cerrato.

I kid you not. The biggest villain in local sports (or, technically, the former Redskins’ executive vice president of football operations. Sometimes I get those two confused) was standing just a few feet away from me as we began boarding the plane. Two things immediately stood out.

First, he was sitting at least a dozen or so rows behind me. In coach. Yeah, the guy who used to live and die to fuel up Redskins One for owner Daniel Snyder as the two flew cross country in pursuit of the most expensive free agents money can buy was now slumming it with the common folks. (I’d say something about how the mighty have fallen, but nothing on his resume suggests he was ever all that mighty.)

Second, he was wearing a Yankees hat – ensuring that, to this day, no one likes him. You got to give him that: the man is nothing, if not consistent.

While I passed up the chance to say anything to the mastermind of the “Decade of Disappointment,” simply crossing paths with Cerrato ensured I would be unable to sleep during the two-hour flight back home. Instead, my mind began to race about just how different things would have been this offseason had Vinny remained employed by my favorite football team.

Needless to say, heavy alcohol consumption and a near panic attack ensued.

Maybe you’ve never really asked yourself how bad things would be today if Bruce Allen hadn’t come to town and turned the Redskins into a respectable franchise once again. Let me welcome you to my nightmare.

For starters, there’s zero chance Mike Shanahan would be the head coach. Like Marty Schottenheimer before him, Shanahan is much too smart to let his fate rest in the hands of Cerrato. He’d have thanked the Redskins for their interest and then ended up in Dallas.

As if that thought isn’t enough of a stomach punch, remember this: without Shanahan there would also be no Jim Haslett or Kyle Shanahan. So if you’re like me, you’re already giddy at the thought of an aggressive-minded defensive coordinator who actually tries to pressure opposing teams or an offensive genius who is so skilled at his craft that he turned the bumbling Houston Texans into the top offense in football.

If Cerrato’s still here, you can go ahead and say goodbye to both of them. In fact, chances are the Redskins would have lost any chance at a top-tier head coach and would have had to settle for someone like two-time NFL failure/college-level cheater Pete Carroll or an in-house candidate like Jerry Gray.

You remember Gray, right? He was the Redskins’ former defensive backs coach who secretly interviewed for the head coach vacancy while Jim Zorn was still in the position. Doesn’t he just sound like someone you’d love to be the face of your franchise? If Cerrato was still on board, that’s probably who’d be calling the shots.

And the Redskins definitely wouldn’t have been savvy enough to pull off a trade for Donovan McNabb. Nope. Vinny wouldn’t have even thought to quietly pick up the phone and gauge the situation. If anything, the ‘Skins would have been the first team mentioned in trade talks because the burgundy and gold were never capable of keeping secrets during the Cerrato era.