what’s wrong with the nats? 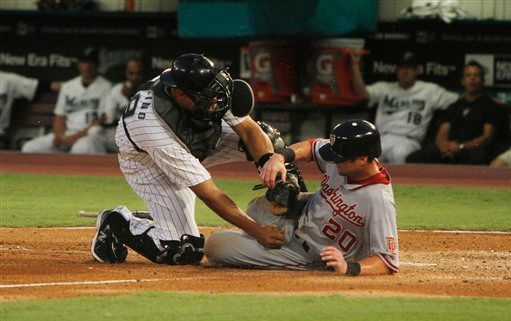 What the hell is wrong with the Washington Nationals? Or, more accurately, what’s it going to take for this team to finally have both the offense and defense clicking at the same time?

During a three-game series against the Florida Marlins this weekend, Nats starters gave up 14 hits, eight walks and just two earned runs while striking out 19 batters in 18 innings. Any team in baseball would be thrilled to get this type of production, right?

Well, leave it to the Nationals to somehow find a way to lose two out of three games anyway.

And it wasn’t because of a shaky bullpen either. Washington relief pitchers threw seven scoreless innings in Florida. This wasted opportunity comes courtesy of the team’s lackluster offense.

Although the Nationals had 27 hits in the series, they scored just four runs. While that’s bad, it’s even worse when you realize that the bulk of the offense came on a three-run double by outfielder Josh Willingham in Friday’s game.

Sadly, the four runs scored in the sixth inning of that series opener represented the only offensive production Washington had the entire series. That enabled the Marlins, who scored a grand total of three runs in three games, to somehow steal the series victory.

“The game is based on execution when you’ve got runners in scoring position,” said Nationals hitting coach Rick Eckstein. “That’s the bottom line. We just didn’t execute the last few days.”

So basically, the Nats bats have gone scoreless over the last 21 innings and Washington stranded 18 runners in scoring position over the last two games. That’s not going to get it done.

“When guys were on base, we weren’t getting it done,” Eckstein said. “Plain and simple. Typically in those situations, they tend to pitch us in a different way. We’ve got to make adjustments. Our adjustments weren’t up to par.”

The only possible silver lining after a disappointing weekend is that the four runs the team did manage to score ensured that rookie pitcher Stephen Strasburg didn’t waste another gem.

Otherwise, there isn’t a lot to be pleased about when it comes to the Nationals offense – although, I’m apparently more concerned about the lack of production than Nats skipper Jim Riggleman.

“Just reminded them that the upside is we’re out there, we’re on base,” Riggleman said. “We’re grinding out quality at-bats to get into situations to score runs. We’re going to turn it around. We’re going to start driving them in.”

This is where I’ll remind you, the loyal D.C. sports fan, that the Nationals are still considering trading away first baseman Adam Dunn and teams like the Chicago White Sox continue to send scouts to Nats games.

Word is Dunn, who will be a free agent at the end of the season, is looking for a four-year, $60-million deal and the Nationals aren’t exactly in a hurry to hand out that kind of cash. Of course, they’ve yet to spend any money since they came to town, so this shouldn’t really qualify as news.

Dunn, who has averaged 40 home runs and 100 runs batted in since 2004, represents a frustration I’ve had with the Nats since they came into my life. This team has never had any sort of depth. There is no safety net. There is no help on the bench or in the system.

Major League Baseball gutted whatever depth and prospects the Montreal Expos had when the league was running the franchise and then whatever was left within the organization was thoroughly run into the ground by general manager Jim Bowden.

Now the Nats have a competent general manager in Mike Rizzo, but the Lerner family still isn’t breaking out the checkbook to field a team worth watching.

Right now the Nationals have a grand total of three batters other teams have to gameplan for – Dunn, Willingham and Ryan Zimmerman. That’s it. That’s the list.

Getting rid of Dunn, even if you think the price tag is unreasonable, makes it that much easier for teams to pitch around the other two threats in the lineup. The only way I’m going to be on board with letting Dunn get away is if the powers that be come out and promise they’ll invest some money into upgrading this pitiful lineup.

Future savior/slugger Bryce Harper isn’t walking through that door anytime soon, so someone is going to have to supply the firepower for Washington. We’re already talking about a team that went scoreless in 26 of the last 27 innings.

Subtracting Dunn (and his 40 homers and 100 RBIs) from a team that already has trouble scoring any kind of runs on a consistent basis just seems like fuzzy math to me.