wall ushers in a new day for wizards 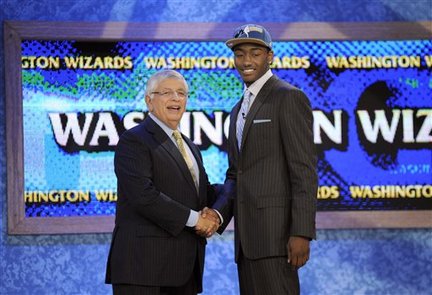 If you woke up Friday morning with that song in your head, it’s safe to assume you were tuned in to the NBA Draft last night as the Washington Wizards took their first step in the right direction by selecting Kentucky point guard John Wall with the top pick.

Wall averaged 16.6 points, 6.5 assists and 4.3 rebounds last season for Kentucky. He’s got good size (or length as Jay Bilas loves to say). He’s got blazing speed. He’s got great vision and court awareness. He even excels on the defense, something most current Wizards know nothing about.

All in all, Wall is one of the more complete players to come out of college in recent history and definitely provides Washington with a much-needed boost.

“He’s an outstanding talent,” said Wizards general manager Ernie Grunfeld. “Great speed, quickness, very good defender, has a very competitive nature to him, and he wants to be a really great player. Great work ethics, so we think he’s going to be a focal point for this organization for many, many years to come.”

Welcome to Washington, Mr. Wall. Your mission, should you choose to accept it, is to become the face of the franchise while making professional basketball relevant again in our nation’s capital. No pressure.

“I feel like I had pressure since I became number one in high school and was one of the top players,” Wall said. “I always got there hungry wanting to fight hard and compete in every game, so when I step on the court I’m going to take on any challenge there.”

Heading into the draft, the Wiz had only six players under contract for next season – Gilbert Arenas, Andray Blatche, Nick Young, JaVale McGee, Al Thornton and Quinton Ross.

Guys like Mike Miller, Randy Foye, Josh Howard and Shaun Livingston who played on the team last season could return to Washington, but chances are each of them will be playing elsewhere next season.

This draft night was all about seizing the opportunity to overhaul the roster and give Wizards fans their first glimpse at what the future holds for owner Ted Leonsis’ newest project.

Earlier in the day, the Wizards agreed to a trade with the Chicago Bulls in which they’ll receive guard Kirk Hinrich, the 17th overall pick and $3 million in exchange for a future second-round choice. I use the future tense because the trade cannot actually be completed until July 8 for salary cap reasons.

From Chicago’s perspective, the deal works because it allows them to clear enough salary cap space to pursue two top-tier free agents this summer, when the likes of LeBron James, Dwyane Wade and Chris Bosh could be on the move.

Hinrich, a seven-year veteran who is versatile enough to play either point or shooting guard, averaged 10.9 points per game and 4.5 assists last season for Chicago. He’s a solid/dependable player who is credited for mentoring Bulls point guard Derrick Rose, the top overall pick two seasons ago. The biggest downside to Hinrich is the hefty price tag.

That’s why Chicago was willing to move the 29-year-old, and even sweeten the pot by adding a first-round pick and cash.

For the Wizards, this move is happening for one reason – to provide Wall with a better role model than Arenas. Hinrich isn’t a great shooter, isn’t even really an above-average point guard and yet, he’ll make $17 million on the last two years of his contract.

The question we’d love to ask Grunfeld is simply – don’t you think that’s an awful lot of money/salary-cap space to commit to someone to play the role of big brother?

I’m all for putting Wall in a position to succeed, but committing that sizeable amount of cash over the next two seasons to a guy because he’s less likely to bring a firearm to work or take a dump in someone’s shoes as a practical joke seems a little questionable, to say the least. But hey, at least Hinrich can play defense.

With the 17th overall pick, the Bulls selected someone named Kevin Seraphin, a 6-9 forward out of France, for the Wiz. The scouting report indicates that the 20-year-old is big and athletic, but he’s lacks experience – having only played organized basketball for five seasons.

Word is, unlike Ricky Rubio and other recent foreign draft picks, Seraphin is anxious to get to the states and begin his NBA career. So we won’t have to wait too long to figure out if he’s any good.

The Wizards also had the 30th and 35th picks in the draft, but they packaged them in a deal with Minnesota to acquire the rights to Trevor Booker (the 23rd overall pick) and Hamady Ndiaye (the 56th pick).

Booker is a 6-7 power forward from Clemson who, according to Grunfeld, will bring toughness to the roster that Washington has lacked in recent years.

“He’s really fast getting up and down the floor,” he said. “He’s very aggressive. He’s a good rebounder, he’s very physical, and one of the things we wanted to address is the physicality of our team and getting tougher. I think we’ve added a couple of players that have shown they have some toughness and who will compete and are not afraid to put their bodies in the way.”

Ndiaye, who was the Big East defensive player of the year for Rutgers last season, is a center who excels at defense, but brings nothing to the game on offense.

So, as of right now, the Wizards will roll into next season with Wall, Arenas, Hinrich, Young, Thornton, Ross, Blache, McGee, Seraphin, Booker and Ndiaye.

Sure, they’d love to move Arenas if they could. And maybe they will. But chances are he’ll be on the roster opening night. And as long as he’s still on the team, the question on everyone’s mind is: can Wall and Arenas coexist?

Who knows for sure if Arenas is willing to put his ego aside and let someone else be the primary ball carrier/face of the franchise or if Wall can live up to the crazy expectations? But those questions aren’t for today.