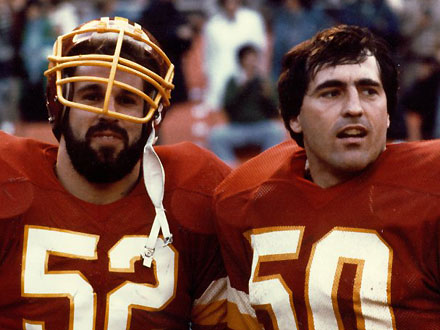 That’s not an indictment of the modern-day athlete. It’s merely a statement of fact.

Anyone in doubt can feel free to name one player on today’s Washington Redskins who you could honestly envision working during the NFL offseason as a prison guard. Yeah, that’s what I thought. It ain’t happening.

For 11 seasons (from 1979-89), Olkewicz quarterbacked the Redskins defense as the middle linebacker. Although he was never the biggest dog in the fight, Olkewicz won over the fans with a blue-collar work ethic on and off the field.

He was a part of two Super Bowl winning teams and was named one of the franchise’s “70 Greatest Redskins.” Simply put – when Joe Gibbs talks about “core Redskins,” you should probably just close your eyes and picture guys like Olkewicz.

We caught up with Olkewicz during the team’s alumni day last week to see what he’s been up to and to figure out why in the hell a professional football player would actually moonlight in a local prison.

“I’m living up in Maryland,” Olkewicz said. “I’ve got a vending machine business that keeps me pretty busy and I’m just trying to stay healthy.”

How cool is it to have a reunion of sorts like this and to see so many old, familiar faces?

You were chatting with your former teammate Clint Didier earlier. How good is it to see him?

“It’s great, especially with him running for political office,” Olkewicz said. “I don’t think I ever would have guessed that, but I wish him the best of luck.”

I’ve got to say, you’ve turned into a local internet sensation lately with you posting a bunch of throwback photos on your Facebook page. Have you seen all the attention fans are giving these photos?

“Yeah, I’ve been digging up a bunch of my old stuff and it seems like people are really enjoying it,” he said. “It’s been good for me too to go back and look at all that stuff again. The older you get it really helps you to appreciate what we were able to do.”

You’ve been away from the game for a while now. how closely do you follow today’s Redskins?

“Oh, I follow them very closely,” Olkewicz said. “I always try to catch them on television and I go to a game a year. I’ve definitely been following them the whole time, but I think I’ll follow them a lot closer with Bruce Allen and Mike Shanahan here. I’m pretty excited about them.”

Is it true that you actually worked as a prison guard during your playing days?

“Yeah, I worked two years in Fairfax County,” he said. “Salaries were a lot different then and you had to do something during the offseason. Law enforcement was my major and I didn’t know how long I was going to play at that point, so that’s what I did. It’s a little different pay scale now. But they’re still out there on that field doing something a lot of people only dream of doing and they deserve to get compensated for it.”

I’m going to go out on a limb and say if you’re working in a prison during the offseason that it’s going to keep you fairly humble and hungry, right?

“Yeah, I think we were a lot hungrier back then, but it’s still the same game,” Olkewicz said. “They’re still out here every day in this heat, running into each other and it’s still a tough sport.”

You said you’re excited about Shanahan and Allen being on board. I take it you think this year’s team is capable of more than what we’ve been subjected to these last few years?

“I think so. They’ve got a good group of players,” he said. “And with Donovan McNabb on board, they’ve got a lot of leadership that will help them get a few more wins. I really think this year is going to be a lot of fun.”