devin thomas: no excuse is gonna cut it 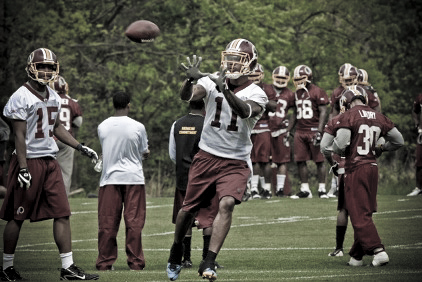 Much has changed with the Washington Redskins. Of course, that’s to be expected after a disastrous 4-12 season in which more than a few players were accused of quitting on their head coach and, for the first time in recent history, ‘Skins fans simply lost all hope.

Since the season-ending loss in San Diego, the Redskins have brought in a new general manager, a new head coach, a new quarterback and dozens of other new faces in hopes of restoring a winning tradition to a once-proud franchise.

While Bruce Allen, Mike Shanahan and Donovan McNabb all have proven track records that speak for themselves, there are still a few areas of uncertainty.

Change was obviously needed after veterans such as Chris Samuels and Randy Thomas were no longer in the equation. Thankfully, the front office finally devoted time and energy into upgrading the line – adding free agent Artis Hicks, first rounder Trent Williams and more.

But one area of the offense that is still in flux seems to be wide receiver.

No one knows for sure whether the league office will impose any kind of discipline on Santana Moss for his alleged involvement with a shady Canadian doctor tied to human growth hormone.

But even if Moss avoids suspension, there’s no guarantee that the Redskins receivers have what it takes to get the job done. Besides Moss, the team will go into next season with youngsters Devin Thomas and Malcolm Kelly, both of which still have plenty to prove.

Which other receivers will make the cut and earn a place on this team? Who the hell knows?

We caught up with Thomas this week to ask him, point blank, how concerned ‘Skins fans should be about the wide outs and to get his take on the change in culture at Redskins Park.

Let’s get right into it. How’s everything with you these days?

“I’m starting to get into my groove, a little bit,” he said. “I’m still building and working towards getting into game shape. You know, it’s the offseason, so you’re still working through the kinks. But I’m definitely starting to feel more comfortable with what we’re doing out there.”

Your teammate and tight end, Fred Davis, told me that year three is the “put up or shut up year.” Either you prove you can cut it in the NFL or you don’t. Would you agree with his statement?

“I like the way that sounds,” Thomas said. “It’s time. No excuse is gonna cut it. We’ve all got an equal chance and we’ve got everything we need with the coaching staff and all. They definitely know what they’re doing, so it’s time to roll, baby.”

This offense also has a new quarterback. What have you seen from Donovan McNabb since he joined the team?

“He’s just taken control,” he said. “He’s a guy you can rely on. You can lean on him when you’re down. He’ll pick you up and he always keeps things real relaxed. He brings such a calmness to the quarterback position. Things just don’t seem so serious and tense out there. That’s what I like the most about Donovan.”

The running back rotation also got a boost with the addition of Larry Johnson. What’s your take on him?

“You look at him and you just see pure determination,” Thomas said. “Obviously he’s been well coached. You can tell that by how he finishes every play strong. That’s the kind of stuff that translates in games. He’s a guy who is going to break tackles and rack up big runs.”

You look at the receivers and it really seems like they’re bringing in anyone they can find, whether it be Joey Galloway, Bobby Wade, Mike Furrey or whoever. What’s the depth at receiver look like to you?

“I mean, we’re still figuring it out,” he said. “We might add some more. We might not. We’ve definitely got plenty of depth and veteran leadership, and we’ve got plenty of youth and talent. Things look pretty good for us.”

Did you just tell us they need to add more talent at wide out?

What expectations do you have for yourself this season?

“Honestly, I expect to be the best out there,” he said. “That’s the standard I hold myself to – to be perfect. I always aim high, so that’s how I’m looking at it coming into this season.”

What is the biggest difference within the organization from last year to this year?

“It starts up top,” Thomas said. “You see the discipline that Coach Shanahan commands and everything like that, and you can see the foundation being set. He keeps us in line and focused on what we’ve got to do.”

With that in mind, what makes you think this is the year the Redskins finally play up to their potential? Why should all of us jump on board that bandwagon once again?

“I know you’re always proud to be a Redskins fan, so I know that’s not an issue,” he said. “But as far as the wins and losses, I know where you’re coming from. I can look you in the eye and tell you that it’s going to happen this year. We’re under the radar right now, and that’s the way we like it. That just means we can shock everybody and then they’ll all jump on the bandwagon because we’re winning. Those people can join the club, but we know where our true fans are. They’re with us regardless.”