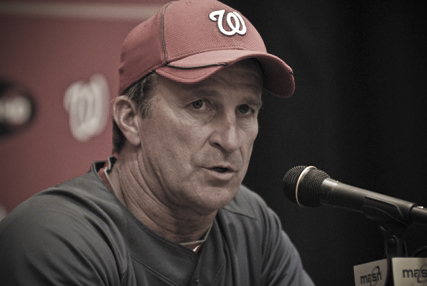 Since their arrival in 2005, the Montreal Expos have been lovable losers. Nothing more.

You could compare them to kid picked last in gym class or the child most likely to be bullied into giving away lunch money, but any way you spin it, it’s been a rough road for the Washington Nationals.

Thankfully, for every prepubescent boy, there mercifully comes a time in life when that scrawny, bird-chested boy begins to transform into man.

You know the signs. Hair in new places, a desire to spend more time taking long, hot showers or whatever. Once you begin to see those signs, it’s only a matter of time before everything changes.

As D.C. sports fans undoubtedly know by now, this is Washington Nationals week. A team that has avoiding relevancy like it was a sexually-transmitted disease is finally earning national attention for something other than back-to-back 100-loss seasons.

That’s what happens when you add two of the most anticipated rookies in recent baseball history to your roster – starting pitcher/savior Stephen Strasburg and slugger/chosen one Bryce Harper.

People suddenly care. Folks find a few extra dollars in their wallets for memorabilia. Family outings involve a night at the park. Simply put – everything is better when you’re winning. And if you can’t win games, at least have some players people care about.

You add bona fide stars like Strasburg and Harper to your team and you’re suddenly newsworthy for something other than opposing team’s fans taking over your ballpark on opening day. Yeah, they make that much of an impact.

With all of the excitement and anticipation building, we opted to spend this past weekend at Nationals Park. If for no other reason than to enjoy one final moment with the bad-news baseball team we’ve gotten to know and love over the last few years. We considered it one last chance to go see the scrawny kid – no, check that – our scrawny kid get roughed up at recess.

And boy, did we love every minute of it.

Led by savvy veteran Livan Hernandez, the Nationals beat the Cincinnati Reds Friday night, 4-2. While the Nats were more than happy to get the win and snap a three-game losing streak, the game wasn’t without controversy.

Washington shortstop Ian Desmond broke a seventh-inning tie with a single that drove in outfielder Josh Willingham. On the next at-bat, Nats catcher Wil Nieves advanced outfielder Roger Bernadina and Desmond to second and third with a sacrifice bunt.

Pinch-hitter Willie Harris drove in Bernadina with a sacrifice fly and Desmond took off for third base. While Desmond beat the throw, his foot momentarily came off the bag at the end of his slide. The question was – did Desmond’s momentum carry him off the bag or did the third baseman have something to do with it?

Third base umpire Paul Schrieber ruled Desmond safe. Reds skipper Dusty Baker came out to argue the call and crew chief Joe West overturned the call, even though he was working first base.

“To be honest with you, once that call was made, my eyes drifted away from Desmond,” said Nationals manager Jim Riggleman of Schrieber’s initial safe ruling. “So I didn’t really know what had happened. I just knew that there was a conference over there and I think Dusty came out and said, ‘Can you get help?’ It’s something that happens on a homerun call, fair or foul and that stuff because another umpire might have another view. I’ve never seen it happen on the bases.”

With that in mind, we asked Riggleman for his side of the conversation when he went out to chat with the umpire after Desmond was ruled out and then ejected for arguing.

“You know, it’s tough to argue much because, like I said, I took my eyes away from the play,” he said. “So I’m kind of arguing blindly a little bit. I’m acting kind of like I know what I saw and saying, ‘You got this wrong, Joe. I had a good look at it.’ And I’m reminding him that he is the first base umpire. This play happened at third. The third base umpire was on top of it and sees what he sees, and now we’re having a conference. I’m just arguing know that basically it’s a no-win situation.”

The theme of controversial calls involving Desmond and third base continued the following night, when Cincinnati defeated Washington, 5-1.

The fun started when Nats reliever Sean Burnett threw a wild pitch in the eighth inning. Reds second baseman Brandon Phillips was awarded third base when third base umpire Dan Bellino ruled that Desmond impeded Phillips’ progress on the base path between second and third.

As the play unfolded, Riggleman admitted that his focus was on watching Nieves, the catcher, track down the ball and wasn’t paying particular attention to Desmond and Phillips. And yet, it was time once again to head out onto the diamond for a conversation with the umpires.

“I’m arguing somewhat blindly,” he said. “I didn’t really know what took place, but I know the explanation that I got didn’t satisfy me, so I argued that. It just didn’t make a lot of sense to me. I just basically am arguing on behalf of the ball club, and if you do enough of that you’re going to get thrown out.”

After being on the raw end of a controversial call for the second night in a row, Riggleman was ejected for protesting the call.

And just to make sure that Riggleman never sleeps again, controversy struck a third and final time in the series.

Reds pinch hitter Scott Rolen appeared to strike out with one out in the top of the ninth inning of a 2-2 ballgame. Unfortunately for the snake-bitten Nats, the close call, once again, went against the home team.

Had Schrieber, who was working first base, correctly ruled that Rolen turned his wrists on his check swing, who knows how the game ends? Sadly, Schrieber missed the call and Rolen hit a two-run homer on the very next pitch.

“I thought we had Rolen struck out,” Riggleman said. “That check swing keeps coming back to haunt us. I know for a fact we had him struck out. It’s called a ball, and then he throws a slider that hangs a little, and Rolen did what you’re supposed to do with a hanging slider.”

Look at the bright side – at least Desmond was left alone on this one.

And that’s how the weekend went for the Nats. Blown calls and missed opportunities. More losses than wins. Whether we’re talking about this past weekend or the last five years, this accurately sums up the Nationals.

Sure, brighter days are on the horizon, with Strasburg and Harper on the way. And it’s only a matter of time before the Nationals graduate from the kiddie table, but truth be told, we were thankful for the chance to spend one final weekend with these loveable loser Nats.

They might not win all that often, but dammit, they’re entertaining.