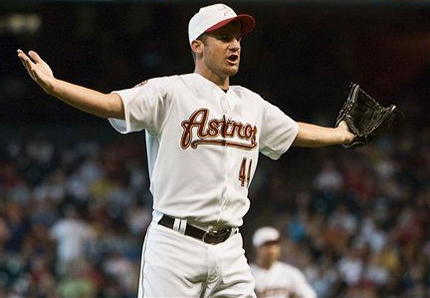 Sometimes a change of scenery makes all the difference in the world.

It seems like just the other day that Houston Astros pitcher Roy Oswalt was being ejected from a game against the Washington Nationals.

Just two and a third innings into his work day, Oswalt lost his temper after missing on a pitch to Nationals outfielder Josh Willingham and yelled something. Home plate umpire Bill Hohn took umbrage and barked back at the pitcher.

Oswalt responded with a terse: “I ain’t talking to you,” and that was enough to earn him an early exit.

With the 32-year-old ace out of the equation, the proverbial floodgates opened as the Nats went on to pummel Houston 14-4 in a rare showing of Washington’s offensive prowess.

Earlier this season Oswalt had already gone public with his request to be traded from the 18-34 Astros, who are currently dead-last in the National League. And now, being ejected less than three innings into a game because he was so frustrated with himself that Oswalt felt compelled to verbally abuse Oswalt? That’s clearly a cry for help, if ever there was one.

What does this all have to do with the D.C. sports scene, you ask? Simple. Oswalt has let it be known that he’s willing to waive his no-trade clause to come to Washington if the Nats and Astros were to work out a deal.

It should be pointed out that Oswalt is asking for a trade because he’s tired of losing and wants to play for a contender. And he’s willing to play for the Nationals. Which means, Oswalt actually thinks the Nats are contenders.

“They’ve been playing well,” said Oswalt to the Washington Post. “They’ve got a good offensive club. I saw where they have [rookie pitcher Stephen] Strasburg coming up. He should make an immediate impact, especially, because no one’s seen him in the league, early. There’s always a little adjustment period there.”

Oswalt aside, this might qualify as the biggest shocker of 2010 – outsiders are actually starting to view the Washington Nationals as a legitimate baseball team.

Yes, the team that has averaged 96 losses a year over the last four seasons is honestly on the verge of respectability. Talk about a stunning development.

“That’s the thing about the East – I think it’s kind of wide open over there,” said Oswalt. “You got Philadelphia and Atlanta is coming back, and I know Washington is still playing well. It should be a good race. That’s the big thing, is just trying to get in the playoffs. Once you get in the playoffs, anything can happen.”

We’ll have to take Oswalt’s word for it, since the Nationals haven’t exactly been a mainstay in the postseason since they arrived in Washington.

Oswalt has two years left on his contract, which pays him $15 million this season and $16 million in 2011 and his deal can be bought out in 2012 for $2 million. Now that you know the price tag, here’s what Oswalt brings to the table: a 3-7 record, with a 2.78 earned run average and a 1.08 walks and hits per inning pitched in 11 starts this season.

Those numbers might not scream Cy Young but, over a span of nine years, Oswalt has a much more impressive 140-77 record with a 3.21 ERA and a 1.20 WHIP. So it’s safe to say that if Houston’s offense was a little more supportive, Oswalt would be much better than 3-7.

While we fully admit it’s a longshot that the Nats strike a deal with Houston, it’s not going to stop us from dreaming of a legitimate rotation featuring Oswalt, Strasburg, Livan Hernandez and Jason Marquis (if he ever gets healthy). The fifth starter would simply be whoever rises to the top out of John Lannan, Craig Stammen, Luis Atilano, Scott Olsen, Chien-Ming Wang and Jordan Zimmermann in a suddenly crowded pitching staff.

Read all of those names again. Now, pause and smile when you realize that the Nats pitching staff was so paper thin a year ago that the caliber of players who would now rank sixth through 10th names on that list are what passed for a rotation.

If that doesn’t put a hop in your step, nothing will.

And like we’ve already said, in all likelihood, if/when Oswalt gets his wish and is shipped off to a contender it won’t be Washington. In all probability, he’ll end up in New York, Boston or Philadelphia in the latest example of the rich getting richer, but that’s not the point.

The point is, this team is starting to make a little noise and the rest of the big leagues are taking notice. Well, that and the fact that simply having Strasburg on the roster makes everything better, but let’s not get too crazy before the kid even throws his first major-league pitch.

The Nationals are quickly becoming a team worth the price of admission. Opposing players know it and our guess is that D.C. sports fans won’t be far behind.