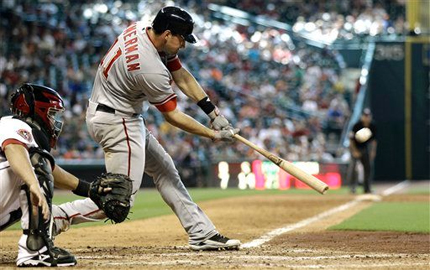 After having 12 of their last 15 games decided by two runs or less the Washington Nationals finally got to enjoy a blowout, cruising to an easy 14-4 victory over the Houston Astros.

And while D.C. sports fans are salivating at the thought of a certain rookie pitcher being added to the rotation, it was a lesser-known rookie pitcher who earned his team-best fifth win Monday night.

Nats fans are already dreaming of Stephen Strasburg’s debut, which the team announced will be June 8 against the Pittsburgh Pirates, but it was Luis Atilano who for the second-straight outing outpitched a top-of-the-rotation ace.

One week after beating San Francisco ace Tim Lincecum, Atilano outdueled Astros pitcher Roy Oswalt (allowing just three earned runs and six hits in 6 2/3 innings) to improve to 5-1. The 25-year-old rookie hasn’t been dominant by any stretch of the imagination (10 hits, two walks, one strikeout and five earned runs in 12 innings pitched), but his last two outings have been good enough to get the job done.

“He threw strikes,” said Nationals manager Jim Riggleman. “He changed speeds. He’s got his breaking ball over. He’s composed. I don’t think he’s too worried about who he’s going up against. Our catchers have done a great job with him. He’s been a pleasure to watch.”

With Atilano keeping them in the game, the Nats bats finally came to life – scoring 14 runs in a game for the second time this season. The game was highlighted by the Nationals’ biggest offensive onslaught (a nine-run seventh inning) the team has seen since moving from Montreal.

“As good as we’ve been, we can do a lot better,” said third baseman Ryan Zimmerman, who hit a three-run homer in the seventh. “It’s exciting. If we can get rolling and scoring some runs, the way our pitchers have been throwing, we’ll be a good team.”

Backup catcher Carlos Maldonado had just two at-bats this season prior to Monday, but the 31-year-old made the most of his rare appearance, blasting a three-run homer off of the left field foul pole in the seventh.

Those two home runs, coupled with a strong day at the plate for first baseman Adam Dunn, who went two for five with four runs batted in, are the primary reason why the Nationals are back at .500 with a 26-26 record.

“It was kind of a snowball effect,” said outfielder Josh Willingham. “Even some balls we weren’t hitting well were falling, so it was a good day for everybody at the plate. You need a game like that every now and then.”

The Nats did make one other noteworthy change, inserting second baseman Christian Guzman as the leadoff batter in place of outfielder Nyjer Morgan. Guzman responded by going three for six with a double and three runs scored, which was much more than anything Morgan has done at the plate of late.

While Morgan might have been surprised being replaced at the top of the order, the move was clearly justified. When he wasn’t throwing his glove in a temper tantrum, Morgan batted just .202 in the month of May and has scored just nine runs in his last 26 games.

If a 14-run offensive explosion wasn’t enough, Nats fans surely have reason for excitement with the official announcement that Strasburg will take the mound for Washington next week.

“We believe he is ready to go,” said Nationals general manager Mike Rizzo.

That’s an understatement. During time in Double and Triple A, the 21-year-old phenom has gone a combined 6-2 with a 1.43 ERA and 60 strikeouts in 50 1/3 innings. If Strasburg isn’t ready for primetime, then no one is.

Adding him to a rotation with Livan Hernandez and John Lannan only makes the Nats even more intriguing. No one expected them to still be hovering around .500 this late into the season, but if Strasburg can continue to find success and other rookies such as Atilano and relief pitcher Drew Storen can continue to excel, this summer could definitely be worth watching.

Like Zimmerman said, the pitching has been there this season. Adding Strasburg can only make things better for the Nationals. And if the hitters can get into a groove and start to score runs more consistently, the rest of the NL East might actually have to start respecting Washington.

It might not sounds like much, but it’s more than most fans thought we could expect at this point.