getting to know maake kemoeatu 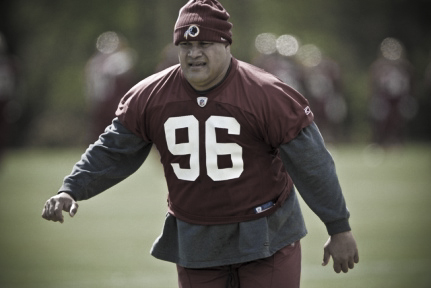 If you’re a fan of the Washington Redskins, then chances are you’ve seen very little of the very big nose tackle Maake Kemoeatu.

That’s because Kemoeatu has been sidelined since he signed with the team as a free agent back in March, thanks to an Achillies’ injury he suffered last August while playing with the Carolina Panthers. That means the Tonga native hasn’t played a meaningful game since Jan. 10, 2009, when his Panthers were thumped by the underdog Arizona Cardinals in the playoffs 33-13.

While the massive lineman, whose playing weight hovers around 340 lbs., has yet to be able to take the field with his new teammates, he’s already made a positive impact on his head coach.

“He is a prototypical nose tackle,” said Mike Shanahan of Kemoeatu this week. “He’s working extremely hard. I think next week, he’ll get more reps. The key is getting ready for summer camp. And there’s not a question he’s full speed, ready to go.”

We caught up with the nine-year veteran to see just how close he is to returning to action and to get his take on why the Redskins have struggled to find success recently.

Simply put – how are you feeling these days?

“I’m feeling good,” he said. “Rehab is going well and I’m slowly making a comeback. I’m at about 90 percent right now. Hopefully by training camp I’ll be in some pads and ready to go, but so far, so good.”

How tough is it to be sidelined for so long?

“It’s been really tough, man,” Kemoeatu said. “I missed a whole year and it just drains you sitting on the sideline watching all the other kids play. I really can’t wait to get back into a groove and into the mix of things. I just want to get back to doing what I love to do.”

Since Redskins fans haven’t had a chance to get to know you yet, can you tell us a little bit about yourself?

[Editor’s note: that’s one big back.]

What kind of game do you bring to the table?

It appears as if the Redskins front office has made a concerted effort to bring in every possible selfless, team-oriented type of defensive linemen available. Does it seem that way to you?

“Yeah, obviously it’s a team-oriented sport and they’re going to go with the best 11 guys,” he said. “It’s not going to be just one guy winning the game for you. It’s all 11 on offense and on defense that have to work together to win games for you. But this is a really good locker room. I’ve asked around to guys who were around last year what the atmosphere is like here and they all say it’s great. The guys who have been around a while, they say the atmosphere in this locker room is great and they’re excited for this year.”

And if this year is anything like seasons past, the defensive line is typically the tightest-knit bunch in the Redskins’ locker room …

“Oh yeah, just meeting guys like Phillip Daniels, Kedric Golston and those guys I felt like I left one home and walked right into another one,” Kemoeatu said. “They’ve already made me feel at home here and helped me out with anything I could have needed. I already feel like I’ve been here for a while. It’s going to be fun hanging out with those guys.”

Playing in Baltimore and Carolina, you’ve had a chance to assess the Redskins from afar. In your opinion, what’s the biggest reason this franchise has struggled over the last few seasons?

“I don’t know,” he said. “It could be because of a lot of different things from the head coach down to the equipment guys. That’s why the guys in the front office get paid the big bucks to make those decisions. I’m just a guy in the locker room playing nose tackle. I’ve got to play my part and I’m sure the guys in the front office will do their part in putting everything together.

“Obviously, after last year, they had to change things up,” Kemoeatu continued. “But I’m not sure what it was. It could be anything. Teams that go to the Super Bowl, it’s always because of that one X-factor. New Orleans won the Super Bowl, but they were a turnover away from losing it. It could be anything that changes an entire season. Time will tell if we can turn things around.”

While Albert Haynesworth seems to want nothing to do with playing nose tackle in a 3-4 defense, Kemoeatu is more than happy to fill whatever role the coaching staff asks of him.

If linebackers such as Brian Orakpo or London Fletcher have another standout year, then chances are the nose tackle, hopefully Kemoeatu, is doing his job by tying up multiple players and freeing them to make plays.

And honestly, 90 percent of Kemoeatu is still twice the size of a normal man, so we’re excited to see what the 31-year-old can do once he makes it back onto the field.