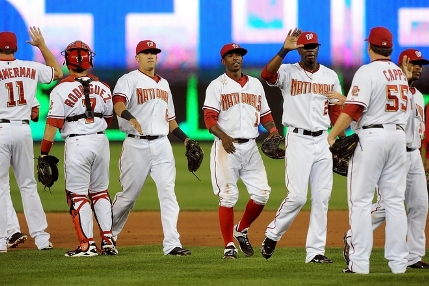 As was the case with many folks around town, the Washington Capitals’ early exit hit us like a stomach punch.

Just when we were getting used to one of our local franchises going from pretender to contender, they suffered a humiliating defeat at the hands of the 16th-best team to make the playoffs.

We’ve never been accused at looking past an opponent, but blowing a three-games-to-one lead against the Montreal Canadiens caught us off guard, to say the least.

Like Ron Burgundy, we resigned ourselves to growing a mountain man beard and drinking copious amounts of milk from the carton to drown away our sorrows.

But a funny thing happened this past weekend. A forgotten friend showed up, fittingly, at our doorstep and swept us away.

The Washington Nationals, who after back-to-back 100-loss seasons have been viewed locally as little more than a doormat, are suddenly interesting again.

On the surface, taking two out of three games from a 14-31 Baltimore Orioles team that is currently dead-last in baseball, isn’t something to write home about. But it’s the manner in which the Nats won those games that is our reason for being suckered back in.

After dropping the series opener to Baltimore 5-3, the Nats were back to an all-too-familiar place – below .500. The following day things went from bad to worse when veteran catcher Ivan “Pudge” Rodriguez was forced out of the game with a back injury and center fielder Nyjer Morgan allowed an inside-the-park home run after throwing a hissy fit rather than field a ball that bounced off his glove.

And yet, the Nationals somehow managed to rally back and earn a 7-6 victory, thanks to a two-run single by first baseman Adam Dunn. Yesterday, the Nationals gutted out a 4-3 victory over the Orioles when outfielder Josh Willingham delivered a walk-off homer in the 10th inning.

This game was equally noteworthy because closer Matt Capps, who has been an indestructible force all season long, blew his first save of the year.

That’s the thing about these last two wins: for the first time this season (and possibly dating back even longer), the Washington Nationals have an identity. A team that has rarely been able to overcome any adversity has suddenly shown that there is enough depth and desire to battle back if something doesn’t go right.

When’s the last time the Nats could survive a momentary lapse in judgment by Morgan or an off day from their closer and still somehow battle back for a victory? Let’s just say it hasn’t happened very often with this bunch.

This team now heads west for a 10-game road trip, but there is an undeniable truth about these Nats: even without highly-touted rookie Stephen Strasburg on the big-league roster yet, they are now worth the price of admission.

“We’re excited where we’re at,” said third baseman Ryan Zimmerman. “But we’re only going to get better as the season goes on.”

Runs are still hard to come by for Washington, from time to time, but a core of Zimmerman, Dunn, Willingham, Morgan, shortstop Ian Desmond and second baseman Christian Guzman has proven to be solid. Meanwhile, the pitching staff, which has been the franchise’s biggest deficiency for years, has more than a few bright spots. Consider this:

While veteran starter Livan Hernandez (4-2 with a 1.62 earned run average) and Capps (16 saves in 17 chances) have been great, the Nats are above .500 even though four of their starting pitchers have ERAs above five.

That’s because Sean Burnett, Tyler Clippard and Capps have been outstanding in relief. Don’t, for a minute, undervalue their importance.

Having reliable arms to turn to in the bullpen gives a team a reason to keep playing, even if they fall behind early. Just like, in seasons past, you knew a game was over if the Nationals fell behind early because of an anemic offense and suspect pitching staff, you can begin to have some confidence that this team will be competitive most nights.

If starters such as Jason Marquis (injured, with a 20.52 ERA), Craig Stammen (5.96 ERA), John Lannan (5.55 ERA) and/or Luis Atilano (5.06 ERA) can turn things around, this team might be capable of a legitimate wild card run, as improbable as that might have been before the season began.

Of course, we’re the same site that openly embraces the phrase “If grandma had balls, she’d be grandpa,” so we’re not about to start planning our summer on hypothetical statements. But that doesn’t mean we can’t get behind the Nats.

To borrow a phrase from Hall of Famer Joe Gibbs, “This team is fighting its guts out.” They might not have the talent or payroll to compete consistently with the elite teams such as the Yankees or Phillies, but they’re not sitting around feeling sorry for themselves.

After losing as many games over the last two seasons as any team in the history of baseball, the Nationals have grown tired of it all and are finally doing something about it. That’s reason enough to get us off the couch and out to Nats Park. Hopefully more fans will begin to feel the same way.