wizards finally win at something 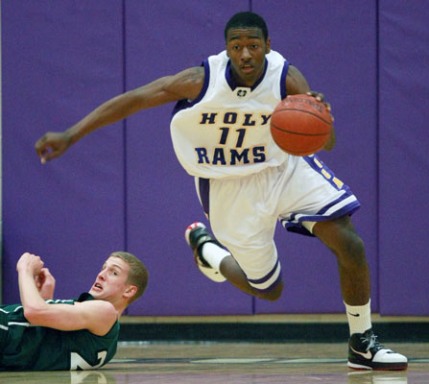 There is a god.

Sure, other places have enjoyed a Basketball Jesus or Jesus Shuttlesworth, but the closest the Washington Bullets/Wizards have ever gotten to immortality was some bum named God Shammgod.

After years (and years and years) of slipping on the proverbial banana peel, the downtrodden Wizards have finally stumbled their way into a small sliver of good luck. Call it the Ted Leonsis Factor. Everything that guy touches turns to gold. Yes, this team was 26-56 last season and they still have a long way to go before they can be invited back to the grown-ups table, but turning a 10 percent chance into the first pick in the NBA draft is a helluva good start.

It doesn’t matter that the last time the Wiz had the top pick they screwed it up by selecting Kwame Brown, a player so soft he wouldn’t have cut it in the WNBA. It doesn’t matter that most draft experts believe this draft doesn’t have a dominant, franchise-cornerstone kind of guy in the mold of Tim Duncan or LeBron James. No, this sudden turn of fortune, much like the arrival of Leonsis as the new owner, signals the dawn of a new day. There’s little reason to believe things will magically get better overnight, but for one day Wiz fans have reason for some of that cautious optimism we so often speak of.

Now, the question becomes, which player should the Wizards select with the number one pick? Do they go with John Wall, the talented point guard from Kentucky, or do they build the franchise around Evan Turner, the shooting guard from the Ohio State University? Both players are immensely talented and are automatically better than anyone already on the roster, but it’s never that simple with this team, is it?

As with everything else involving the Wizards, this decision ultimately revolves around Gilbert Arenas. Sure, he hasn’t been relevant on the court in three seasons, but the man continues to put a stranglehold on this franchise.

“Gilbert is still with us. He’s been down at our gym, working out and getting ready,” Grunfeld said during a conference call last night. “The more good players you have, the better.”

Not exactly the words you’re hoping to hear when dreaming of a fresh start for one of the most cursed franchises in the history of professional sports. Thankfully, Grunfeld stopped talking long enough to let the voice of reason make it all better.

“We have a lot of work to do with the franchise,” Leonsis said. “The players, the culture, the expectations, the discipline around the team, but I do think it is a breath of fresh air and does revive the franchise and gives us a shot to be an exciting team with a lot of expectations.

“I know how hard it is to rebuild a team,” he continued. “I am going to be patient but I have a strong belief that our management team and ownership team is very focused.”

Forget, for a moment, that Arenas was such a moron that he had to serve time in prison for bringing firearms to his workplace. If the Wizards hold true to Grunfeld’s words and keep Arenas, his impact on either Wall or Turner has everything to do with on the court.

Here’s what we know about Wall:

For starters, Wall’s Wildcats went 35-3 last year, meaning they won nine games more than the Wizards while playing 44 less times. And honestly, some folks might suggest that Kentucky had more NBA-caliber players than the Wiz did last season, but we digress.

Wall is a 6-4 point guard who excels with the ball in his hand (he averaged 16.6 points, 4.3 rebounds and 6.5 assists per game last season). He’s got more than enough speed and athleticism to continue to be a stand-out player whenever he takes the court and by all accounts he’s a hard working and coachable player. His 3.5 grade point average his second semester shows Wall is bright, especially when compared to the 2.0 that his Kentucky team reportedly averaged.

The weakest area of Wall’s game would have to be his three-point shooting, which hovered around 32 percent. If you’re looking for an NBA player to compare Wall to, you could probably go with Chicago’s Derrick Rose.

Here’s what we know about Turner:

He’s good. Like, really good (he averaged 20.4 points, 9.2 rebounds, and 6.0 assists while shooting over 51 percent from the floor.) His team was pretty good too. Turner’s Buckeyes were also among the cream of the crop in college basketball last season, posting a 29-8 record.

He’s one tough bastard. For those not familiar, Turner broke two vertebrae in his back and yet, somehow only missed four weeks of action. It’s safe to say toughness is not a problem for this guy.

When healthy, Turner is a versatile player who is more than comfortable player either shooting guard or small forward. He’s able to create his own shot and has no problem driving to the rim. He’s also clutch, meaning that, unlike anyone currently employed by the Wizards, you want the ball in his hands with the game on the line.

Turner seems to be a player in the mold of Philadelphia’s Andre Iguodala, which is ironic since they’ll likely be teammates if Washington selects Wall.

So what does Arenas have to do with either of these two guys? Well, for starters, he fancies himself a point guard. And people who cover the team for a living seem to believe he’s not keen on the idea of turning the position over to someone else and sliding over to shooting guard. That would appear to be a problem if the Wiz followed conventional wisdom and went with Wall.

If Washington opted for Turner, then Arenas could remain at point guard and Turner could slide into the shooting guard role. Problem solved, right? Not so fast, sweetheart. A backcourt featuring Arenas and Turner could very well lead the league in turnovers, since both players have been known to be careless with the rock.

In a perfect world, the Wizards draft Wall and ship Arenas off to anywhere. It doesn’t matter what you get back for him, you simply do what’s best for the franchise by closing the chapter on one of the team’s low points (which is really saying something when you’re talking about the Wizards) and starting over with a highly-talented Wall and a nice chunk of salary cap space.

Of course, the Wizards already used all of their luck landing the top spot in the draft. There’s absolutely no reason to believe lightning could strike the same doormat twice. So get used to the idea of Wall coming to town and the Wizards attempting to become the first team in NBA history to try and run a two point guard offense.

If nothing else, they’ll be watchable once again.