caps get it right with backstrom 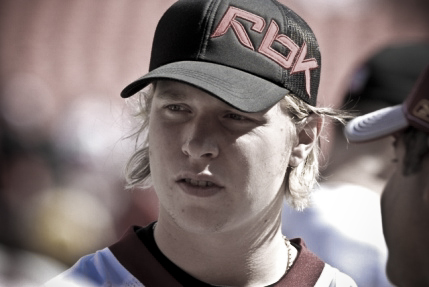 We still don’t have any kids (that we know of), but our favorite sports teams have been kind enough to shed some light on the subject for us.

Take the Washington Redskins, for example. They’re definitely the older, more stubborn child. There’s little doubt that they’ve got some sort of attention deficit disorder, as evident by their new master plan seemingly each and every year. Oh, and they’ve been known to turn some folks off with their brash demeanor as they walk around like they own the place. Basically, they mean well, but the majority of their issues are self inflicted.

And then there’s the Washington Capitals. They’re the younger, quieter sibling. They haven’t been around nearly as long as the ‘Skins, which works to their advantage because they don’t pretend to have all the answers. They’ve taken a few missteps along the way (see: Jagr, Jaromir), but they’re more likely to learn from those mistakes than their older brother.

There’s no doubt that we love both of these teams, as evident by the staggering amount of time, energy and money we’ve dedicated to both of them. But it’s impossible to love both franchises the same when they’re so dramatically different.

The one aspect of this aggressive offseason we can give the ‘Skins credit for is that none of these players received a lucrative signing bonus or long-term contract extension, as was standard in the past. Outside of McNabb, any of the dozen players listed above could be let go tomorrow and it wouldn’t have a huge impact on the team. It’s not earth shattering by any stretch of the imagination, but it counts as progress.

Conversely, we have the Capitals, who yesterday announced the signing of center Nicklas Backstrom to a 10-year, $67-million contract. During his three seasons in Washington, the 22-year-old Swede has continually improved in every offensive category and ranks among the league’s elite.

Backstrom is now signed through 2019-20 and his linemate, forward Alex Ovechkin, is locked up through 2020-21. The dynamic duo scored a combined 210 points last season, easily the best in the NHL and they were two of only four players to crack the 100-point barrier (Backstrom set career-highs with 33 goals and 68 assists for 101 points this season).

Any conversation about the NHL’s best duos has to include the following (with their average annual salary cap hit in parenthesis):

While $16.2 million is a large chunk of money, especially in a league where the salary cap hovers around $56.8, the Capitals are wise to lock up Backstrom and Ovechkin for as long as humanly possible. The dynamic duo scored a combined 210 points last season, easily the best in the NHL and they were two of only four players to crack the 100-point barrier.

In fact, here’s a quick breakdown of those top four duos:

If that’s the kind of production the Caps can expect for the next decade, then they’re going to be fun to watch for a long, long time.

The Capitals also announced the signing of 2009 first rounder Marcus Johansson, who agreed to a three-year entry-level contract with the team. The 19-year-old Swede, who was last seen captaining Team Sweden for the 2010 World Junior Championships, will be invited to camp this fall and will have a chance to earn a roster spot next season, according to general manager George McPhee.

To recap, the Capitals signing a 22-year-old center widely regarded as one of the league’s elite to a 10-year contract and also inked a highly-regarded 19-year-old prospect to a three-year-deal.

This might sound like common sense, but building a team around young, talented players goes a long way towards franchise stability and long-term success. Conversely, dedicating a large percentage of your roster to aging, 30-somethings might not be the best way to construct a perennial contender. And yet, these are the paths two of our favorite sports teams have chosen.

We know, chances are, that one of the teams will continue to succeed while the other continues to struggle, but that doesn’t mean we love one more than the other. Like any honest parent, we’ve simply learned to love them differently. For better or worse, these are our teams.