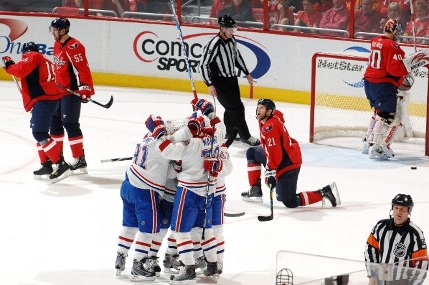 We know what you’re thinking. Right about now, you’re saying to yourself:

“Say it ain’t so. Tell us that it was all a bad dream and that the Washington Capitals didn’t just become the first team in NHL history to blow a three-games-to-one lead against an eighth-seeded opponent. Please, say something to help it all make sense now that the Montreal Canadiens are moving on to the second round while the Caps are sent packing way earlier than anyone around town could have possibly conceived.”

Well, we’re hurting just as much as the rest of you, but we’ll do our best to explain how things spiraled out of control for the best regular-season team in Capitals history.

For starters, lets take a quick peek at the numbers.

For the series, the Capitals fired 576 shots. Of those, 292 were on net. That means 284 were not. Canadiens players blocked 182 shots during the series and Capitals shooters missed the net completely 102 times. Montreal players did such a solid job of getting in the way and clogging up the shooting lanes on defense, that the Caps started to settle for long-range shots. Couple that with an overall lack of players willing to crash the net and suddenly Habs goalie Jaroslav Halak’s job just got a lot easier.

We’re not taking anything away from the guy, because Halak was clearly one of the best performers in this seven-game battle. But far too often he had a clear line of sight on a puck being fired from the space in between the faceoff circle and the blueline. It doesn’t matter how talented your shooters are, if you’re giving an NHL goalie that much time and space to locate and lock in on the puck, most of them are going to make the save. In related news, Halak stopped 131 of 134 shots in the final three games.

In Game 7, Halak made 41 saves. His Montreal teammates blocked another 41 Capitals’ shots. On the other side of the rink, the Canadiens finished the game with just 16 shots on goal, but scored twice. Sure, Halak outplayed Capitals goalie Semyon Varlamov throughout most of the series, but that’s not the point. Quality trumps quantity every time.

If Montreal’s offense happily settled for wrist shots from the blueline with no one camped out in front of the net, then Varlamov would have become the impenetrable force making 100 saves at a time. But the Montreal offense picked its spots and whenever possible, drove to the net. They didn’t create nearly as many scoring chances as Washington, but the degree of difficulty on the shots Varlamov faced versus that of Halak wasn’t even close.

Look, the primary reason the Washington Wizards failed isn’t because their best players brought firearms to the locker room. No, it’s because their offense was fundamentally flawed. With a core group of Gilbert Arenas, Antawn Jamison and Caron Butler, the Wizards were a team of jump shooters who were below average on defense. As long as their 20-footers dropped, they could hang around in a playoff series. But whenever the opposing team committed to defense, the Wizards couldn’t keep up.

There’s no denying that the Capitals are a much more talented team than the Wizards, and hockey is definitely a different animal than basketball. But you can still see our point: teams that settle for long-range shots on offense and don’t make defense a priority simply cannot win in the postseason. Halak might turn out to be a fine goaltender, but Washington’s passive offense transformed the goalie with the shaky water bottle into the second coming of Patrick Roy.

Sure, players like Mike Knuble, Brooks Laich and Eric Fehr attempted to crash the net on a fairly regular basis, but that’s a mindset that everyone in the lineup needed to commit to. When players such as Alexander Semin, Brendan Morrison and Tomas Fleischmann refused, the offense became stale, stagnant and predictable. Add in defensemen Mike Green and Joe Corvo and suddenly you’ve got an entire line of players who were slumping because of poor decision making.

And because all of those guys are central characters in the Washington offense, and because coach Bruce Boudreau continued to play many of them in key situations, the ice began to tilt heavily in favor of Montreal. Again, we don’t want to take anything away from the Canadiens. They deserved to win the series. But much of what ultimately doomed the Caps was self inflicted.

Take, for example, the powerplay. During the regular season, the Capitals converted at over 25 percent. In the postseason, they went one for 33. That kind of drop seemingly overnight is unheard of. So what the hell happened?

Throughout the entire series, the Washington powerplay looked like five players working individually. They never looked in synch. There was never any rhythm or tempo established on the man advantage. It honestly looked like a handful of guys showed up and started playing a pickup game with complete strangers.

Instead of cycling the puck around and waiting to catch a Montreal player out of position, Capitals players attempted to shoulder the load on their own at the expense of their system and tried to force the offense. Ill-advised passes and low-percentage shots became the hallmark on the rudderless powerplay. They might get a shot on net from time to time, but Montreal rarely felt in danger when down a player. With that confidence and their level of execution on both sides of the rink, Montreal deserved to win. Sure, it sucks to admit that, but it’s the truth.

Sometime in the near future, Capitals general manager George McPhee is going to have to sit down and make some difficult choices. Boudreau isn’t going anywhere and neither are stand-out players like Alex Ovechkin and Nicklas Backstrom. The question McPhee must ask himself is – how much of the rest of this roster can he build around?

If finishing checks and crashing the net is what it has historically taken to win in the Stanley Cup playoffs, then is it wise to commit such a large chunk of salary cap space to a player like Semin, who is immensely talented, but terrified of physical contact? McPhee will also have to take a good, hard look at Green and figure out why such a superb talent turns into a liability in the playoffs.

Those two players alone will bank more than $11 million next season, which is a just less than 20 percent of the total space under the salary cap. Do you stick with both of these players long term and hope they continue to grow and improve, or do you realize that maybe this is what you get with Semin and Green and make the decision to trade away one or both of them? It won’t be easy, but this is just part of what McPhee will be faced with this offseason. But let’s not get too far ahead of ourselves.

For now, we’re going to step away from the situation. We’ll ignore the impulse to vent our frustrations and point fingers. Sometime in the future, we’ll take a look at the roster and offer our take on how the team should handle free agency, etc. Instead, we’ll simply thank the Caps for a memorable regular season and leave it at that.