it’s now or never for caps 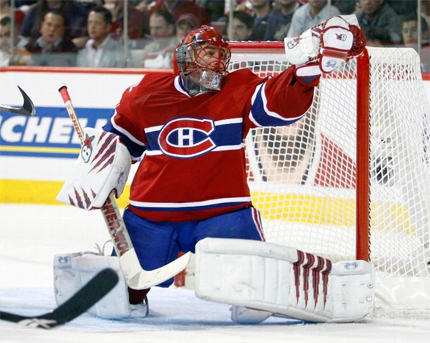 When we said we hoped the Washington Capitals went deep into the playoffs, this wasn’t exactly what we had in mind.

Thanks largely to too many players thinking and playing individually rather than as a team, the Capitals will now host the Montreal Canadiens at the Verizon Center Wednesday night for a seventh and deciding game.

It’s do or die. Win or go home. Get it together or join the San Jose Sharks as a great regular-season team that falls apart in the postseason. This is the part where Tony Kornheiser, if he still wrote, would bust out the “Choking dogs” label.

That’s what happens when the Capitals go up three games to one against the eighth-seeded Canadiens and fail to put away a lesser opponent. The Caps are clearly the more talented team. Anyone who compares the regular-season statistics and accomplishments of the two teams can see that.

But the reason this series is still going and the reason Montreal has all of the momentum is that they’re the ones playing as a team. Every player on the Canadiens’ roster is on the same page. They’re all working together and doing the little things that matter in the playoffs – namely, finishing checks and crashing the net.

And then there’s the Capitals. While top-line players such as Alex Ovechkin, Nicklas Backstrom and Mike Knuble have led by example and role-players like Boyd Gordon, Jason Chimera and Eric Fehr have earned their keep, too many other guys are missing in action.

Look, we fully understand why Caps coach Bruce Boudreau feels compelled to stand by his players as they try to work through a slump. Guys like Alexander Semin, Mike Green and Tomas Fleischmann played a huge role in one of the most successful regular seasons in franchise history, so it makes sense Boudreau isn’t in a hurry to turn his back on the talented trio.

But it’s a completely different situation when Boudreau continually marches out those three in key situations. That’s not honorable, it’s foolish.

Take for example the powerplay. If you haven’t noticed, everything about the powerplay is broken. During the regular season, the Caps converted more than 25 percent of their extra-man advantages.

Against Montreal, they’ve been painfully pitiful on the man advantage – scoring just once in 30 chances, largely because guys like Semin and Green are out there every time a Canadiens player heads to the penalty box.

As a unit, the Caps are passing too much and settling for long-range, low-percentage shots on the powerplay. Sure, it sounds great to have 50 or more shots in a game, but how many of them truly challenged Canadiens goalie Jaroslav Halak?

Let us explain what we’re talking about. In the third period, as the Capitals were trying like hell to get back into the game, we couldn’t help but notice one glaring reason why the powerplay has yet to arrive this series.

Green gained control of the puck and made his push up the right wing boards towards the net. As he drew near the faceoff circle to Halak’s left a defenseman closed in on him. Green saw two teammates camped out in front of the net and fired a wristshot on net. There’s just one problem – he went high, short side.

That means, even though there were two different Caps players in front of the net ready to screen Halak or play a rebound, Green settled for a shot that had zero chance of going anywhere near them. Halak gloved the puck and that was that. If Green fired that shot lower to the ice rather than high on the glove side, there’s a chance that forward Brooks Laich or another teammate taps in a layup on the rebound.

So yeah, not all shots are created equally. Quality beats out quantity every time. If Halak has a clear line of sight on the shot, then the chances of a player, even one as skilled as Green or Semin, isn’t going to beat him from the blueline.

Speaking of Semin, like Green, he clearly feels the weight of the world on his shoulders. He wants to break out of his slump so badly that he continues to fire shots from anywhere and everywhere. And that’s the problem. He’s not even considering being a part of the offense at this point. Semin is simply gaining control of the puck and firing a shot on net as often as possible.

The entire hockey-viewing world knows Semin wants nothing to do with physical contact, so he’s basically become the guy at the local YMCA who ignores everyone else and continually jacks up 20-foot jump shots all day long. Is that the guy you want to build your offense around? Yeah, me neither.

But Boudreau continues to send them out on the ice in every key situation. By the end of Game 6, every time a referee raised his hand for a delayed whistle against Montreal, we were openly rooting for someone on the Caps to retaliate and earn a penalty.

We figured if Boudreau continued to roll his lines during four-on-four play, there was a better chance of his players scoring than during a powerplay (which has basically become Semin or Green trying to force the play while the rest of the Capitals players stand around watching).

In fact, the only memorable moment for us came late in the second period when Fehr finally snapped. Through two periods, Halak was impenetrable. Too many of the Caps players settled for long-range shots early and gave Halak plenty of confidence. He was seeing the puck well and no one was doing anything to make him uncomfortable.

We screamed at the TV for someone – anyone – to take a run at Halak. It didn’t matter if the play drew a penalty, the Capitals needed to do something to rattle the Montreal netminder.

Enter Fehr. With less than two minutes to play in the second, Fehr crosschecked Andrei Markov from behind and sent the talented defenseman flying into Halak. For the first time in two games, someone knocked Halak on his ass and this pleased the hockey gods.

In related news, Fehr was rewarded in the third period with his team’s lone goal of the evening. Had Fehr or any other Caps player done this earlier in the game, we would be having a different conversation. But the Capitals have lost their swagger and are lacking physicality in their play these days.

For this reason alone Bruce, gritty forward Scott Walker needs to be in your lineup Wednesday night. Sit Fleischmann. Play Walker. Hell, start Walker and tell him you want him to hit one Habs player for every tooth in his mouth (that’s what? At least six or seven hits, right?)

Continue to play guys like Gordon, Chimera and Fehr as much as possible. And while you’re at it, scale back the minutes Semin and Green see – especially in key moments when the game is on the line. If you keep throwing them out there as you wait for them to snap out of it, this season is going to be over a lot sooner than anyone around here ever dreamed of. You’re the same guy who has no trouble sitting a goalie when you feel he doesn’t have it. Why treat the rest of your roster any differently?

Sure, those guys have talent. But this team cannot win on talent alone.