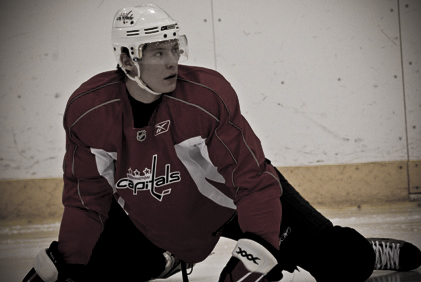 In a record-breaking season full of “firsts,” the Washington Capitals had a chance to once again reach a new milestone in Game 5 against the Montreal Canadiens last Friday.

That game presented this incarnation of the Capitals with their first opportunity to close out an opponent. Sure, they’ve won playoff series before, but in each of the last two seasons, those series wins have come with Washington battling back after facing elimination.

This time around, the Capitals led three-games-to-one and had the chance to send the Canadiens back to Montreal while also earning a few extra days of rest before advancing to the second round.

Unfortunately, the Capitals came out flat at home (once again), fell behind early (once again) and did more to lose a game than their opponent did to win it (once again). The Caps fell behind 2-0 in the first seven minutes and never battled back, losing to the Habs in frustrating fashion 2-1.

Now, the series heads back to Montreal for a pivotal Game 6 tonight.

After Game 5, Capitals coach Bruce Boudreau was seething. Sure, the guy has worn his heart on his sleeve on previous occasions, but this seemed different.

“We’re not getting 20 guys playing,” Boudreau said in his post-game press conference. “We’re getting 13 and 14 guys every night, rather than everybody coming to play. Tonight we had five or six passengers again.”

Boudreau backed off that stance the following day.

“That was the coach’s frustration,” he said. “My assistants were coming up to me and saying, ‘Relax’. I was a little too hot-headed last night.”

But here’s the thing – Boudreau is right. There are definitely a handful of players who simply aren’t carrying their weight right now.

The biggest bull’s eye falls on enigmatic forward Alexander Semin. We often joke that Semin is the NHL equivalent of Two Face of Batman fame, with his Good Sasha/Bad Sasha act.

When he’s on his game, few players in the entire league are as talented as Semin. But when he’s having an off night, Semin is also a game changer – but not in a good way.

Usual indicators that Bad Sasha is in the house include getting overly cute with the puck, selfish penalties in the offensive zone and a steadfast refusal to go anywhere near the net for fear of physical contact. During this postseason though, Semin has added a new wrinkle – happily forcing low-percentage shots on net from bad locations.

Through five games, Semin has just one assist. He’s got no goals, even though he leads Washington in shots fired with 29 and currently ranks 13th on the team in points.

If Boudreau wanted to minimize Semin’s negative impact without making radical changes to the lineup, he should consider pairing him on a line with center Brendan Morrison and forward Tomas Fleischmann. If nothing else, it would put all of the underachievers on one line to keep them from bringing down the guys who are actually earning their paychecks in this series.

Boudreau won’t take Semin out of the lineup, but he should strongly consider inserting scrappy forward Scott Walker and gritty center David Steckel into the lineup in favor of Fleischmann and Morrison.

Who knows? Walker and Steckel could very well provide the jolt needed to close out this series while a night off might be exactly what the doctor ordered for Fleischmann and Morrison.

And while we’re at it, the Capitals could also use a strong outing from defenseman Mike Green. A year ago he admitted to being overweight and out of shape. This postseason he’s struggling once again and snapping out of his current funk would go a long way towards sending the Canadiens packing.

Regardless of what shuffling Boudreau may or may not do with his roster, the players who do see action have to simplify things and go back to what works in the playoffs.

Watching the Phoenix Coyotes dismantle the Detroit Red Wings 5-2 Sunday, it was completely obvious what their gameplan was: crash the net and finish your check. Nothing earth shattering, but it worked.

If that sounds familiar, it’s because that’s exactly how the Caps cruised to a convincing 5-1 victory against Montreal back in Game 3. For one memorable night, Capitals forwards happily flocked to the crease in an attempt to cause havoc on Canadiens goalie Carey Price. If they had the puck, they drove to the net in hopes of converting a layup. Those who didn’t have the puck went there anyway to screen the goalie or wait for any possible rebounds.

Fast forward to Game 5 and the Capitals were back to their bad habits: namely settling for long-range shots with no one anywhere near the goal. Habs goalie Jaroslav Halak had a clear line of slight on seemingly every puck fired his way and even in the event that he didn’t make a clean save, there was no one around to fight for the rebound.

Halak made 37 saves on the night, but the degree of difficulty was low. If the Capitals want to get off to a strong start tonight, they’d be wise to start the fourth line of Jason Chimera, Boyd Gordon and Matt Bradley.

As soon as the Caps gain control of the puck, Chimera’s chief priority should be making Halak uncomfortable. Bump him. Screen him. Take an extra swipe at a loose puck. Do anything to rattle the youngster and throw him off his game. It worked earlier in the series and can work again.

Our final piece of advice to the Caps seems obvious, but we feel obligated to say it anyway.  Don’t concern yourself with stuff that’s beyond your control. Translation: don’t get caught up in the bullshit.

Earlier in the series, the Canadiens were spending too much time and energy on all the stuff that doesn’t matter. After every whistle, someone in a Montreal sweater was looking for a fight and it was clear they had lost their focus. All the Capitals had to do was send Chimera onto the ice and they were guaranteed the next shift would end with a Habs player in the penalty box.

Of course, the Capitals powerplay has been so pitiful, Washington has rarely taken advantage of the situation and now the tables have turned slightly. The Canadiens know one more loss means the end of a disappointing season and they’re playing like it. Now, it appears the Caps are the team that needs to refocus their energy.

All anyone is talking about is the fact that Montreal got away with having too many men on the ice last game or that center Eric Belanger took a high stick to the face and lost a mouthful of teeth in the process. Whether we like it or not, referees are human. They make mistakes. It’s going to happen from time to time and it’s best for teams not to worry about it. Just play your game and don’t sweat what you can’t control.

The Canadiens are giving the Capitals all they can handle as it is. If they’re going to finish off a Montreal team on the ropes, they can’t worry about any other distractions.

Play your game … well, the one that involves your players finishing their checks and crashing the net. Stay out of the penalty box and don’t put yourself behind the proverbial eight ball by coming out flat. None of this is difficult to comprehend. But all of it is vital if the Caps want to avoid a Game 7.