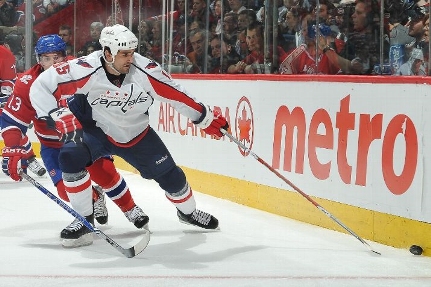 We fully admit the only thing casual sports fans know about the Washington Capitals is that they have superstar Alex Ovechkin.

But if the Caps are going to achieve anything this postseason, it’s going to have just as much to do with his supporting cast as it does The Great 8. Take, for example, Game 3.

The Capitals took to the road and steamrolled the Montreal Canadiens 5-1 in front of a sellout crowd at the Bell Centre Monday night not because of a superhuman performance by Ovechkin. They cruised to an easy victory on the backs of such unheralded players as Boyd Gordon, Eric Fehr, Jason Chimera and Matt Bradley.

And if you’re a Montreal fan, you better hope and pray that their show was a one-night only engagement.

That’s because Ovechkin might be one of the select few hockey players with name recognition, but anyone who follows the Capitals know that this team cannot win unless more than the captain is contributing.

This isn’t basketball, where Kobe Bryant or LeBron James can wave four of his teammates aside to post up an opponent. Ovechkin can have an off night. Opponents – especially if they have home-ice advantage – can use matchups to their advantage to shut down one player.

But when the Caps have steady secondary scoring from guys not named Ovechkin, Nicklas Backstrom, Alexander Semin or Mike Green, there’s not a team in the league who is going to hold them down. All eyes were on the Washington goaltending situation when Game 3 started, but Gordon took the pressure off his goalie and his coach by scoring a shorthanded goal barely a minute into the second period.

A little over seven minutes later, the Capitals were up 3-0, thanks to goals by Brooks Laich (assisted by Green and Fehr) and Fehr (assisted by Laich and Morrison). Just like that, Montreal goalie Jaroslav Halak was sent packing and suddenly, the Capitals goaltending situation wasn’t the only subplot of the series anymore.

During his abbreviated evening, Halak stopped just 10 of 13 shots (.769 save percentage), so he was replaced in net for the Canadiens by Carey Price – the fourth netminder to see action in this series.

Price was better than Halak, and likely earned himself the start for Game 4, but it was the young man on the other end of the ice who rose to the challenge.

Capitals goalie Semyon Varlamov made coach Bruce Boudreau look like a genius for the second-consecutive postseason. He looked much more like the athletic youngster Caps fans rallied behind during the first two months of the season rather than the sometimes erratic version of the 21-year-old we’ve seen more of in recent play.

Varlamov is now 3-0 lifetime with a 1.63 goals against average and a sparkling .940 save percentage at Montreal. In related news, Varlamov will no doubt continue to backstop the Capitals postseason run for as long as he keeps up his stellar play.

And just like that, order is restored and the Capitals have reclaimed their home-ice advantage. Lets take a closer look at the blue-collar workers who helped Varlamov earn his second-straight win.

We already mentioned that Gordon had a shorthanded goal to get his team going (and bail out forward Tomas Fleischmann, who was in the penalty box for hooking). Gordon also had five shots on net, was among the ice-time leaders for penalty killers and won 13 of 15 faceoffs for good measure. After sitting out for Game 2 as a healthy scratch, it’s safe to assume Gordon will be a mainstay in the lineup for the foreseeable future.

One final note on faceoff wins: Gordon, center Eric Belanger and center David Steckel have won 69 of 95 faceoffs against the Canadiens (72.6 percent) through three games.

What can we say about Fehr? The Capitals are undefeated in postseason games he scores a goal. Sure, it’s only two games, but when a player who’s not on one of the top two lines is racking up points, it helps everything else click. Something seemed off when Laich and Semin were paired together on the second line for the first two games. The line was pressing too hard and trying to force the play. Laich was dropped down to the third line, where he skated with Fehr and center Brendan Morrison, and suddenly, the Caps are a goal-scoring machine again? Coincidence?  We think not.

Jason Chimera showed great restraint against Montreal, declining to drop the gloves with Maxim Lapierre and not retaliating when Brian Gionta decided to give him six crosschecks to the back after one stoppage in play. This was in stark contrast to the Chimera we saw in a 4-3 shootout loss to the Boston Bruins April 11. On that day, Chimera was in the middle of everything, but went too far — earning 14 minutes in penalties. Monday night, he was an agitator without crossing the line and avoided putting his team in a less-than-desirable position.

It’s hard to believe someone could change that much in less than two weeks, but Chimera is clearly showing Boudreau he’s a team player and he continues to find ways to positively impact these tightly-contested games – even when he’s getting roughly 10 minutes of game time.

And then there’s Bradley. Seriously, the dude’s achieved cult status already. No need to try and hype him up anymore, but the guy is the consummate team player – willing to do anything and everything to help his team. He’s much more likely to drop the gloves than score a goal, and yet, he’s got three goals and two assists for five points in his last eight games (including the regular season).

Of course, we could dwell on the negative: namely, the Capitals powerplay struggles. We could point out that the Caps have more shorthanded goals than they do powerplay goals this series and remind folks that’s not a statistic to be proud of, but we’re going to let it go. Montreal players will try to convince themselves that this game got away from them because of one bad period. Caps fans know better than that.

The Capitals weathered the storm early as the Canadiens fed off the hometown crowd, and once the players were able to settle into a rhythm, they started playing the brand of hockey we all know and love. The Capitals were content to score goals, while the frustrated Canadiens were too busy taking selfish penalties to give themselves any chance of a comeback.

We all know how much hockey and the Canadiens mean to Montreal. Now, just think what the circus will be like over the next two days surrounding the Habs as they try to bounce back from this beatdown. After laying that egg, we wouldn’t be surprised if a few Canadiens players would rather play Game 4 anywhere else but Montreal.

Hopefully, they’ll continue to get caught up with the distractions while the Capitals players continue to show that their up-tempo style of play can succeed in the playoffs. If so, Game 4 could end up being more of the same in a series that just got a whole lot more enjoyable.