caps draw canadiens in round one 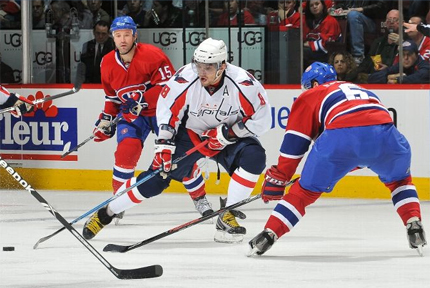 When you think about it, it had to be the Montreal Canadiens.

As this year’s Washington Capitals attempt to go where no other team in franchise history has gone before, it’s fitting that they have to start that journey against the most-storied team the NHL has to offer.

The Caps are looking to hoist the Cup for the first time, so why not go through the grand daddy of them all – a tradition-laden Montreal franchise that has sipped from Lord Stanley’s Cup 24 times?

The Canadiens were founded in 1909 and have been a part of more than 140 playoff series, but this will be the first time they square off against the Capitals in the postseason. Old school versus new school. A Montreal team that has done, seen and won it all battling a Capitals squad attempting to rewrite a franchise history littered with playoff disappointment.

And if nothing else, this is the team that gave Washington Rod Langway and Craig Laughlin … in the same trade. A Hall of Famer and the guy who made it socially acceptable to put a biscuit in a basket. The least the Caps can do to say thank you is invite the Habs to town for a first-ever postseason bout.

About those Canadiens, here’s what you need to know about Montreal heading into this first-round matchup:

– Montreal has been ravaged by injuries, with 259 games lost due to injury this season.
– The Habs scored 217 goals for and allowed 223 goals against. Ottawa is the only other team to qualify for the playoffs that allowed more goals than they’ve scored this season.
– Center Tomas Plekanec led the team with 25 goals and 45 assists for 70 points. With those numbers, Plekanec would have finished fifth on the Caps in points.
– Montreal had three 20 goal scorers. Washington had seven (and Mike Green finished with one short, with 19 goals for the year).
– Defenseman Andrei Markov led Montreal with a plus 11, which would have put him tied with defenseman John Carlson for 13th best on the Caps.
– Their season highlight was a six-game winning streak. They also had a five-game losing streak and a six-game winless streak this year.
– The Canadiens, you might remember, were the team to finally put an end to the Caps’ franchise-record 14-game winning streak.
– Montreal is limping into the playoffs, going just 3-4-3 in their final 10 games of the regular season.

Now, a quick refresher for those joining the bandwagon a little late:

– The Capitals set a franchise-record for most points in a single season with 121.
– They set a ton of other team and individual records this season, but the best stat to come out of this season is the team’s 30-4-8 record since Ovechkin was named captain.
– The Capitals finished with 318 goals this year – 46 more than Vancouver, who finished second.
– Under coach Bruce Boudreau, the Caps score early and often, but they also do a much better job of closing out opponents these days.
– Washington was 46-5-9 this season when leading or tied after two periods.
– In related news, the Capitals outscored opponents 111-67 in the third period this year, which goes a long way towards explaining how they brought home their first Presidents’ Trophy.

The central character in the story will easily be Capitals goalie Jose Theodore, who went 30-7-7 with a 2.81 goals-against average and .911 save percentage this season. Theodore even closed out the regular season playing some of the best hockey of his illustrious career, going 19-0-3 down the stretch. But until he proves it in the playoffs, critics will always have an easy argument against Theodore, who is just 19-27 lifetime in the postseason.

You might remember that once upon a time, Theodore was a highly-touted goaltender for these same Montreal Canadiens. Unfortunately for him, Theodore’s regular season success never really translated in the playoffs. He went 11-15 in the playoffs in his eight seasons with Montreal, and even though he had won the Vezina and Hart trophies, Theodore was eventually traded to Colorado in 2006.

It’s safe to assume that having a dominant series against his former team would be something that Theodore could live with. Exacting revenge while also proving his critics wrong would be much more enjoyable than the fate as he suffered a year ago, when Theodore was benched against the New York Rangers in favor of unproven goalie Semyon Varlamov because Boudreau felt compelled to make a change.

If Theodore comes out strong, the high-powered Capitals shouldn’t have too much of an issue dispatching the Canadiens.

There’s also the fact that superstar forward Alex Ovechkin has to be more than a little fired up after losing out on the goals scoring and point scoring races on the final day of the season. Always the competitor, Ovechkin will undoubtedly be motivated once the first puck is dropping Thursday night.

Which brings us to our final point. If you have any chance at all to score tickets to the opening game of the Capitals-Canadiens series, you owe it to yourself to go.

Not only will the atmosphere be electric at Verizon Center, where the Caps are 30-5-6 this year, but it’s also been the scene for some of Ovechkin’s most magical moments against the Habs.

January 31, 2008: Ovechkin suffers a broken nose and requires stitches in his lip after taking a puck to the face. This only angered the league’s best player, who responded with a four-goal, five-point effort that paved the way to a 5-4 victory for the Capitals.

February 18, 2009: The NHL’s reigning most valuable player does it again. This time, Ovechkin pulls off a backhanded bank shot off the board (That’s alliteration, Holmes!) to elude Montreal defenseman Roman Hamrlik at center ice. Before he gets to the net, Ovechkin is hooked down to the ice from behind by defenseman Kyle Chipchura. Undeterred, Ovechkin improvises and, from his belly, lifts the puck past Montreal goalie Carey Price for one of the most beautiful goals in recent memory.

While Ovechkin has taken great joy in scoring against anyone and everyone the league has to offer, some of his most memorable plays have come at the expense of the Canadiens. Thursday night will be his next chance to steal the stage. What will Ovechkin and friends do for an encore? No one knows for sure, but you can bet we’ll be in attendance to find out.