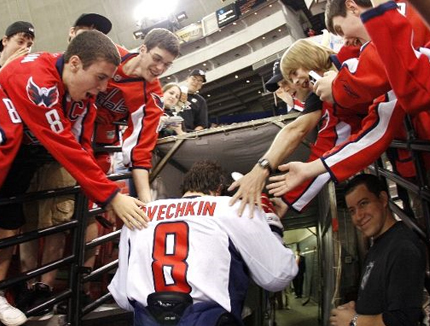 As far as the regular season goes, the Washington Capitals have nothing left to play for. They’ve achieved every goal they set their sights on, including winning their division, the Eastern Conference and even claiming the franchise’s first Presidents’ Trophy.

Sure, Caps players could continue to elevate many of the career highs they’ve set this season, but personal achievements and accolades aren’t a priority. The only mission coach Bruce Boudreau and his players have during the final stretch of games is to get healthy and focused for what we all hope is a lengthy playoff push.

And yet, the Capitals keep on winning. In back-to-back games this week, they beat the Boston Bruins 3-2 Monday in a possible first-round playoff preview and then the following night the Caps put together a 60-minute clinic against the rival Pittsburgh Penguins 6-3.

No one would fault them if Boudreau opted to “pull a Colts” and rest his starters for the final week of the regular season. Players like defenseman Mike Green and forward Eric Belanger have enjoyed a few days of rest to recover from nagging injuries, but otherwise, the Capitals continue to play games with the same intensity and mindset that’s enabled them to rewrite the franchise record for wins in a season.

The Bruins game was a tightly-contested affair against a team who has yet to qualify for the postseason. With much more on the line, Boston was clearly the aggressor in the early stages. They outshot the Capitals 12 in the opening frame and scored what could have been a backbreaking goal with just 1.6 second left in the first period.

The Capitals were able to shrug off the goal and other dicey moments – like the tripping penalty forward Brooks Laich took with five minutes left in regulation – to claim victory in overtime. In poetic fashion, Laich was able to redeem himself by scoring the game-winning goal in the first minute of overtime while Bruins defenseman Dennis Wideman, the player he was whistled for tripping, was in the penalty box.

The game had much more meaning for Boston than the Capitals, and yet, they figured since they had to be there anyways, they might as well go out and win the game.

The following night, the Caps traveled to Pittsburgh to take on Sidney Crosby and friends. The Penguins, like the Bruins, are still fighting for postseason positioning. They’re hoping to lock up the second seed in the East, so again, the Capitals were playing an opponent who needed to win the game more than they did. Add in the rivalry factor and, oh by the way, Washington’s 3-0 record against the Penguins this season and it was a safe bet this game was going to be a good one.

And it was … so long as you’re a Caps fan. Washington light the lamp three times in the second period and cruised to an easy win against the Stanley Cup champs.

This game was important to one member of the Capitals – goalie Semyon Varlamov, who hadn’t faced Pittsburgh since his Game 7 meltdown in the second-round of the playoff last season. Varlamov made 26 saves in the win and was good, but not great.

We’re sure Varlamov would love to have back one or two of the goals he allowed and he still gives up juicy rebounds too often for our liking, but he played well enough to earn the win. Whenever the Penguins turned up the pressure, Varlamov got the job done. He’s still not playing on the same level as Jose Theodore these days, but he should be a competent backup during the postseason.

The reason the Capitals were able to sweep Pittsburgh for the first time in franchise history was because of their big guns. Alex Ovechkin had two goals. Alexander Semin continues his outstanding play of late. Nicklas Backstrom had three assists and nearly scored a goal-of-the-year-caliber tally, a wrist shot off of one knee that players outside of Ovechkin rarely even think to attempt. Basically, the big names had a big game and the Caps were able to defeat the team everyone assumes they’ll have to go through in order to achieve the franchise’s ultimate goal.

Speaking of the Penguins, they went winless for the year against the Capitals and New Jersey Devils. Regular season success and/or failures mean little in the Stanley Cup playoffs, but that’s not a statistic anyone in Pittsburgh cares to discuss.

Of course, if you want a heated discussion, just ask a Caps fan to explain how the Penguins have been given 19 powerplay opportunities while Washington has had just eight calls go their way in their four matchups this season. For the record, Washington scored on four of eight of their extra-man advantages, while Pittsburgh went just three for 19.

But enough about the Penguins, we’ll worry about them once these two teams meet again in the playoffs. This is about the Caps, who are seemingly back on track after a few shaky outings last month. While we’re still terrified anytime defensemen Joe Corvo is in a one-on-one situation, we’ve been really pleased with the team’s apparent dedication to defense over these last two games.

After blocking 22 Boston shots, the Capitals were at it again in Pittsburgh, blocking 18. When opponents try to build an argument against Washington, they immediately knock the team’s style of play and their sometimes erratic play in the defensive zone. Well, if the Caps can keep getting in solid positioning and making life difficult for opposing offenses, that’s exactly the kind of effort that keeps teams alive in April and May.

It’s only two games, so let’s not make any sweeping conclusions, but this, more than anything, is something to focus on as the regular season comes to an end. If the Capitals can get healthy and continue their solid play on defense, they might make enough noise over the next month or so to get folks to forget about that 4-12 football team up the road. Doubtful, but fans can dream, right?