ready to embrace the mcnabb era 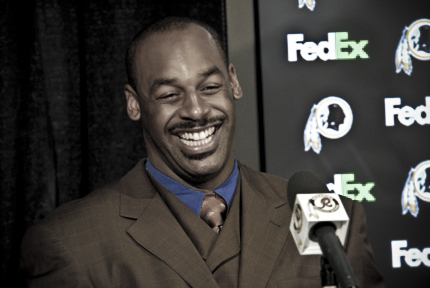 Those who have been around a while know by now that Homer McFanboy is a disciple of Ted Leonsis. That is to say, when the Washington Capitals owner speaks, we listen.

When Teddy Logon, who seemingly has found a way to succeed at every challenge he’s taken on, shares how he thinks a franchise should be built, we don’t question him.

After all, Leonsis and friends consciously made the decision to take a veteran Caps team that was good enough to make the playoffs, but not do anything once they got there, and blow it up. Simply achieving mediocrity wasn’t acceptable. Leonsis asked for patience from his team’s fanbase. He promised that they had a five-year plan which focused on building through the draft. The Capitals took their lumps for a few years, but they stockpiled young, inexpensive talent and let the team grow together. Down the road, the Caps then thought about adding select free agents, but only after a solid foundation was already in place.

In related news, the Capitals just secured the first Presidents’ Trophy in franchise history and will have home-ice advantage throughout the playoffs.

Conversely, we have Washington Redskins owner Daniel Snyder. While he’s been able to find success in many other avenues in life, his football franchise has been mediocre for the majority of his ownership. Although Snyder is much less comfortable in the public spotlight than Leonsis, his mantra has always seemed to be “money equals wins.”

The Redskins front office, especially with Vinny Cerrato calling the shots, always seemingly believed they were one player away from competing with the big boys. That’s translated into an aggressive approach to trades and free agency. It also translated into a de-emphasizing of the draft. Why worry about tomorrow when we can win today?

Anyone remotely familiar with the Redskins knows how this has played out. Because of their flawed mentality, the ‘Skins are always top heavy. Big-name players sit atop of the roster, but because of the salary cap, there was little money left over for the bottom half of the depth chart.

That means, if a talented player like Chris Samuels or Randy Thomas gets hurt and misses any significant amount of playing time, the Redskins are suddenly asking below average backups to play above their skill level. Basically, there’s no depth and no safety net. If folks stay healthy and they catch a few breaks, the Redskins can back their way into the playoffs. But more times than not, The Danny is left on the outside looking in come January.

Which brings us to today. Logic suggests that the Redskins, coming off of a 4-12 season, might benefit from Leonsis’ guidance. “If your team isn’t good enough to win it all, then blow it up and start again.” Head coach Mike Shanahan and general manager Bruce Allen are proven commodities that will pacify a previously distraught fanbase, so it would make sense if they opted to clean house and rebuild the franchise from the ground up.

That looked to be the case when established veterans such as Antwaan Randle El, Ladell Betts, Fred Smoot, Cornelius Griffin, Rock Cartwright, Randy Thomas and Todd Collins were abruptly released. And yet, that’s not how things have played out.

Instead, seemingly every new addition during this offseason has been at or above the age of 30: offensive lineman Artis Hicks (31), defensive tackle Ma’ake Kemoeatu (31), cornerback Phillip Buchanon (29), punter Josh Bidwell (34), quarterback Rex Grossman (29), running backs Larry Johnson (30) and Willie Parker (29), meaning the words “Redskins” and “rebuild” have yet to be formally introduced.

And then, on Easter Sunday, the team made the most shocking move of all – acquiring Pro Bowl quarterback Donovan F. McNabb from the Philadelphia Eagles for a couple draft picks. While it still seems that the team is content to slap a band-aid on a much larger wound, things instantly become much more interesting for the burgundy and gold. The roster still has several areas of need, but there’s no denying that this trade instantly makes the Redskins better than they were 48 hours earlier. Even without an offensive line, you can see fans starting to talk themselves into next season already. That’s what happens when you bring in a player of McNabb’s stature.

He’s a six-time Pro Bowler, and even with sporadic episodes of inaccuracy and a lack of mobility that aided him earlier in his career, McNabb is still a top-10 talent at this single most important position in professional football. And honestly, when was the last time the Redskins could say they had a top-10 quarterback? Mark Brunell had a good run … during his Jacksonville tenure. Brad Johnson was good for one season here, but he wasn’t at that level. Our guess is you have to go all the way back to Joe Theismann to find a Washington quarterback of that caliber.

Which is why, against out better judgment, we’re completely in love with the McNabb trade. We’ve always supported and appreciated Jason Campbell, but his resume is nowhere near McNabb’s body of work. McNabb is a winner, and for much of his career he did so at the expense of the Redskins. Acquiring him instantly makes the Redskins better while simultaneously robbing rival Philadelphia of a top-tier talent.

Honestly, the last time we were this genuinely excited, it involved a handful of boobie and homecoming. The phrase “giddy like a schoolgirl” could even be applied to the situation.

And we’re not the only ones who are thrilled to welcome McNabb to town. While many Redskins players are quick to show support to the outgoing Campbell, everyone who has spoke on the record has expressed enthusiasm about the trade. You can tell they’re already looking ahead to getting out there on the practice field to see what’s in store for a team boasting proven winners like Shanahan and McNabb.

Hell, for the first time this offseason we can even see a scenario in which running back Clinton Portis remains with the Redskins. McNabb is instantly the best quarterback he’s had the chance to play alongside, and simply having him on board lightens the load, so to speak, that Portis and the running backs will be asked to carry. Do you think he’s going to pass up the chance to rekindle his career with Shanahan now that McNabb is here? Dude’s crazy, but he’s not insane.

This move should instantly fire up everyone in that locker room, which is basically everyone on the roster except Albert Haynesworth. We’d include him, but he’s too important to be a team player. He’d rather hang out with his personal trainer than put in time with his teammates. Maybe if he swings by to pick up his paycheck, someone will break the news to him that McNabb is a Redskin.

Of course, there is a chance he’s already heard about the trade. That’s because his agent will, at some point, undoubtedly inform him his name came up during trade talks between Washington and Philly. The Redskins front office knew with 100 percent certainty that the Eagles weren’t going to take on his massive contract, but our hunch is they threw him in an offer anyway – if for no other reason than to say, “Get with the program or we’ll happily move forward without you.” If that’s the case, then this truly has been the perfect offseason.

Redskins fans are used to spectacular offseasons. They’re also used to disappointment once actual football games begin. And while there’s no guarantee that this year will be any different, these series of moves have ensured one thing – the Redskins head into this season with one of the most intriguing teams in the game.

Even folks outside of D.C. will be curious to see how things unfold with Shanahan calling the shots and McNabb throwing the ball. They’re still sacrificing long-term in hopes of winning now, but in this one case, we’re willing to give them a pass. That’s what happens when you pull off one of the biggest trades in franchise history.