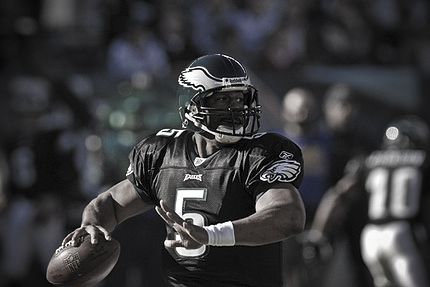 It’s official, the Washington Redskins have reclaimed the title of “offseason champions.”

Sure, there was a while there when you thought the Chicago Bears or some other team might steal the crown, but when it’s all said and done, there’s only one team that consistently brings it in March and April.

Hail to the Redskins.

Folks around town were intrigued when the Redskins announced the signing of free agent running back Willie Parker late Friday. After all, adding him to a stable that already includes established backs like Clinton Portis and Larry Johnson was unexpected to say the least. Well, no one is talking running backs anymore. Not after the news that Donovan McNabb was traded to the Redskins for the 37th overall pick in the 2010 draft and a future 3rd or 4th rounder.

That means, for the moment, the Redskins have McNabb, as well as Jason Campbell and Rex Grossman at quarterback to go with the Portis/Johnson/Parker trio at running back. While this clearly signifies the dawn of a new day for the burgundy and gold, it also brings out the cynic in us. Are the Redskins officially playing fantasy football? Does this guarantee that the ‘Skins will easily win the 2004 NFC East title? Can any of these guys play left tackle? These are just a few of the questions we have.

At this point, we should expect an announcement that the Redskins have signed Plaxico Burress by Wednesday night at the latest, right? Flozell Adams by Friday?

Okay, sorry about that. Back to the trade that shocked our nation’s capital.

As a quick refresher, here’s the story on McNabb:

– He will be 34 years old in November.
– He’s a six-time Pro Bowl quarterback.
– He led the Eagles to five NFC championship games and one Super Bowl in 11 seasons with Philadelphia.
– He’s one of six quarterbacks all time to throw for 25,000 yards and rush for 3,000 yards.
– Statistically speaking, he’s one of the least intercepted quarterbacks of all time.

Because this trade completely came out of nowhere, Redskins fans are still trying to take it all in and determine how they feel about it. Well, let us say this up front – this is a good move for the Redskins. They made it clear that Campbell wasn’t the long-term solution when they brought in Sam Bradford, Jimmy Clausen and any other college quarterback looking for a mini-vacation. Well, if they’ve identified quarterback as a position of need and McNabb suddenly becomes available, then they’ve got to pick up the phone and see what the asking price is. McNabb might not be in the top five in the NFL, but he’s still a top-10 talent.

What else can we say about McNabb? Well, he’s very comfortable being a leader, and most importantly, he’s got the credentials to walk into a brand-new locker room and earn the respect of his peers on day one. Last season should serve as a strong reminder just how important team leadership is. Distractions like Portis throwing teammates under the bus and/or Albert Haynesworth attempting to stage a protest on Christmas day are things that cause teams to self destruct. McNabb has never been afraid to be a vocal leader and if he sees a teammate pulling this stuff, his time with Terrell Owens taught him to speak up sooner rather than later.

And here’s our favorite statistic about Donovan McNabb: last season he was six of nine for 307 yards with five touchdowns and no interceptions on passes thrown more than 40 yards. Think back to the Redskins-Eagles Monday Night Football game and picture him connecting with wide out DeSean Jackson on backbreaking plays as Redskins defensive backs watched helplessly. Dude’s got the stones to throw the deep ball and unlike anyone we’ve had in town over the last few years, actually connects when he unleashes a bomb down the sidelines. Mark Brunell brought that to town for one brief season. McNabb’s been doing it for a decade.

Also, McNabb has extensive knowledge of the NFC East and his track record shows he knows how to win against the rest of the division. You don’t lead your team to five NFC championship games on accident. If nothing else, McNabb is 11-6 lifetime against the Redskins, so getting him on the roster means one less top-tier quarterback to worry about. Oh, and speaking of the division, don’t forget this – McNabb is going to be supremely motivated to show the Eagles, Rush Limbaugh and the rest of the world he’s got something left in the tank. The day the schedule comes out you can safely bet that he’s going to circle both Philly games on his calendar.

As the Redskins showed by going winless in the NFC East last season, you’re not going anywhere if you can’t win in your division. History says McNabb has no problem making that happen. So you’ve got to figure once the ‘Skins finally address the offensive line, things could get downright interesting around here.

McNabb is one of the few proven winners in the NFL. Same holds true for Mike Shanahan. Nothing promises the two will be able to recreate their previous successes in Washington, but the dynamic duo should give fans much more reason for cautious optimism than Campbell and Jim Zorn. If nothing else, the Redskins are worth the price of admission again. And maybe, just maybe, that brand-new high-definition video replay board can showcase a newfound firepower this offense has been sorely lacking for far too long.

Kudos to you, Daniel Snyder. You’ve done it again. You brought home another offseason championship and you’ve given everyone around town yet another reason to believe that this team can magically transform into a contender overnight. We should all know better by now, but dammit, you make it so entertaining to be a Redskins fan.