caps get back on track, down thrashers 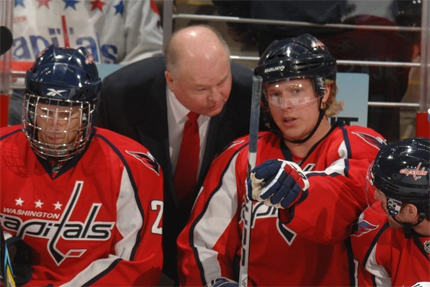 The Washington Capitals weren’t spectacular in their 2-1 win over the Atlanta Thrashers Thursday night, but that’s okay.

After dropping three-straight games, the Capitals were in dire need of a performance like this. They needed 60 full minutes of skating and maximum effort. They needed guys giving it their all on both ends of the rink and doing the little things that ultimately make a difference. Most importantly, they needed to play better defensively to lessen the burden on their goalies and give them a fighting chance.

Add it all up and the Caps ended the evening with 50 wins for the second-consecutive season, marking the first time in franchise history the team has accomplished that feat.

Sure, a good chunk of those wins came at the expense of the mediocre Southeast Division, but it’s not like Washington asked the league to over-expand and break up the good old Patrick Division. They can only play who the NHL lines them up against. But we digress.

Here’s why this is a game Caps fans should savor: this ugly victory was exactly what it takes to win in the playoffs.

“The first two periods were kind of boring, a lot of whistles and not a lot happening,” said forward Matt Bradley, who scored the game-winning goal. “But those are the kinds of games that [coach] Bruce [Boudreau] has talked about us being mentally tough, waiting it out and not making any stupid moves and our breaks would come. And that happened in the third period. I was lucky enough to get one.”

The Capitals might play one of the most aesthetically pleasing styles hockey has to offer, but things change in the postseason. Goals are harder to come by and the smallest error can come back to haunt you. Al Pacino might even say it’s a game of inches and when you add them all up … nevermind. Back to our original point, this Caps-Thrashers matchup felt exactly like a playoff game.

And it’s fitting, because Atlanta very well might be their first-round opponent. Philadelphia, Montreal and Boston are currently sitting sixth through eighth in the Eastern Conference with 82 points apiece, while the Thrashers are just two points back with 80 points. One of those four teams will square off with the Capitals in round one. Caps fans should hope it’s Atlanta.

Prior to Thursday night, the Capitals were 4-0 against the Thrashers while outscoring them 22-10 this season. Simply put, there wasn’t a better team to see on the schedule than Atlanta.

The Capitals were also happy to see the return of Brooks Laich, who has missed the last few games after taking “friendly fire” when a John Carlson slapshot rang off the goalpost in practice and struck the forward in the face. Laich returned to action and skated on the second line with Alexander Semin and Mathieu Perreault, one of the more intriguing lines Boudreau has concocted this season.

It’s not a line that we would have thought of, but it was a line that worked well. Although they were held pointless, the trio skated hard and did a good job controlling the puck. Laich seemed a little tentative, which is to be expected when you’re back in action after a four-game layoff due to a puck in the face, but Perreault hustled enough to more than make up the difference.

Rusty return aside, it was nice to have Laich back in action. Blue-collar workers like him and Mike Knuble are flat out difference makers when you find your season on the line.

“He just adds another dimension to our team,” Boudreau said of Laich. “If it was puzzle, he just fits that thing. He completes us.”

“I don’t know why I said that,” said Boudreau. “That was stupid. Sorry.”

Moving along, another welcome sight was defenseman Shaone Morrisonn imposing his will on the opposition. Although he came back Tuesday night, in the 5-4 loss to Ottawa, Morrisonn was back to throwing his body around and bringing a physical aspect that is lacking when he’s out of the lineup.

While defensemen like Mike Green, Joe Corvo and even Tom Poti love to jump up ice and into the offense, Morrisonn is content to stay back and protect his end of the rink. He’d much rather grind it out in the corners rather than jump into a three-on-two breakaway and we love him for it. We don’t know if Boudreau thinks Morrisonn “completes” his defensive rotation, but he definitely plays an important role on this team.

Now, with Laich and Morrisonn back in action, the Capitals are waiting for center Brendan Morrison, defenseman John Carlson and gritty forward Scott Walker to return – hopefully before the end of the regular season. If that happens, they’ll have all their weapons ready and be in position to build on an already memorable season.