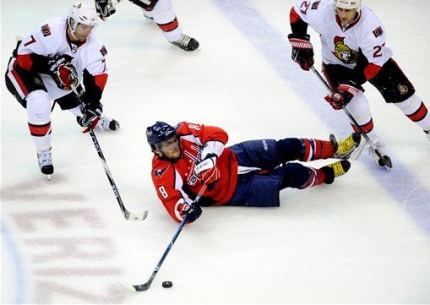 No one wants to see the Washington Capitals lose three games in a row. Fans also can’t be pleased watching the Capitals sputter out of the gate and fall behind yet again in the first period.

While supremely talented, this Caps team has shown a tendency to get outworked and out-hustled in the early stages of recent games (they’ve been outscored nine to one in the first frame of their last three games).

However, if there is a silver lining to all of this, it’s that this streak is happening now and not in a couple weeks. Once the playoffs start, there is no margin for error. If the Capitals stroll into the postseason thinking everyone is just going to roll over as they cruise to the Stanley Cup, they’ll be brought back to reality sooner than anyone around town cares to think about.

Tuesday’s 5-4 loss to the Ottawa Senators will give coach Bruce Boudreau and his staff plenty to focus on. There’s tons of film from the last three games to show carelessness by Capitals players on both sides of the rink.

We’ve got poor decision making and ill-advised penalties in the offensive zone combined with defensemen getting caught out of position and giving up odd-man rushes far too frequently. Add in a few softies courtesy of the team’s suddenly vulnerable goaltending and the Caps begin to feel more like Goliath looking past David rather than the powerhouse we’ve all come to know and love.

That’s one thing we can all agree on.

“We didn’t come out ready to play and it hurt us in the end,” said defenseman Tom Poti after the Senators game, although to be fair, the quote could apply to pretty much every game the Capitals have played over the last week.

As surprising as it may sound, the Caps would be wise to take a page from Ottawa, even if they’re currently 21 points behind them in the standings.

“At this time of year, not only do you want to win games, but you want to feel good about how you’re playing too,” said Senators forward Jason Spezza, who had two goals and two assists against Washington. “Confidence is huge this time of year, and there’s a big difference between the win and the loss and how the mood is in the room the next day.”

It’s one thing to say a sneaky Carolina Hurricanes team caught the Capitals off guard in a 3-2 shootout win or that the Caps have always failed to play well in the early stages of a mid-day matinee matchup, which is why they fell 5-3 to the Calgary Flames. But for a third consecutive game, the Capitals looked like they had just rolled out of bed minutes before the puck dropped and were steamrolled by a hungrier opponent.

Looking at the bigger picture, this game marked the 10th time in 18 games that a Capitals game went to overtime, meaning Washington has just five wins in regulation during that span.

Over the last 18 games, the Caps are 9-9 (no sense differentiating between losses and overtime losses with the playoffs around the corner.) They might have locked up their division and the Eastern Conference, but their play over the last two months is nothing to brag about.

Here’s the thing — that Boudreau quote wasn’t from after the Senators loss. That came earlier in the day, when Boudreau spoke with reporters after practice. How happy do you think he was after he was treated to more of the same for a third-straight game?

“Well, I don’t like five goals against,” Boudreau said. “This has happened twice in a row and we’ve got to get better. There were four pretty iffy goals out there tonight.”

Forget the offense. This team can score goals with the best of them. Solidifying their play in the defensive zone has to be priority number-one.

Forwards need to be quicker to back-check. Defensemen need to be in better position to box out forwards so goals like Ottawa’s first one don’t happen. If a player is camped out in front of the net, Caps defensemen need to punish him. Make him pay the price and think twice before trying to screen goalie Jose Theodore.

We’re not asking players like Joe Corvo and Jeff Schultz to become players they’re not. Just give your goalie a chance to see the puck and make the save.

All players, regardless of position, need to make smarter decisions in terms of high-risk passes and penalties. The final two Senators goals of the night came with a Washington player in the penalty box.

It’s safe to say the Caps don’t have the best penalty-killing unit in professional hockey. Avoiding those types of situations with your mediocre special teams unit would seem to be wise.

With just six games left, the Capitals clearly have work to do. Boudreau has easily been the best coach this town has seen in a long, long time. Well, now is when he earns his money.

He’s always been a guy with a finger on his team’s pulse and able to sense the best way to handle the ebbs and flows of a grinding season. This team needs him to do whatever it takes — whether it be sitting down one of his big-name players to send a message to the rest of the roster that their level of effort is not acceptable or whatever — this is when Boudreau has to do something to get things back on track.

We’ve said it countless times this season, but no one cares about regular season accolades. Hockey players are ultimately defined by postseason success or failure.

A team like the San Jose Sharks has rightly earned the reputation of great regular season team who chokes in the playoffs. Well, if the Capitals can’t get back on track in the immediate future, as painful as it is to say, the Sharks might have some company.