caps, caps fans off their game 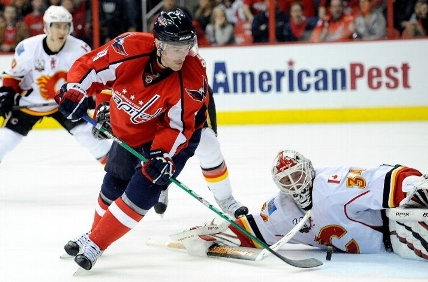 With a chance to clinch the first regular-season Eastern Conference title in franchise history with a victory over the struggling Calgary Flames, the Washington Capitals fell flat.

Later in the evening the Capitals backed into the conference title, thanks to a New Jersey loss, but that was merely a consolation prize after the team’s lackluster effort against an inferior opponent.

It’s long been known that this Caps squad struggles with matinee matchups, thanks to a young roster that prefers to sleep in, but the opening period was about as ugly a 20 minutes as anything we’ve seen in recent history.

Capitals goalie Jose Theodore saw his day end prematurely through little fault of his own. His defense was nowhere to be found in the opening frame and before Theodore knew what was happening, he had been lifted after the Flames scored on three of their first 10 shots. Barely 10 minutes into the game, Theodore was headed for the showers and the Caps were effectively done.

“We didn’t have any energy – it looked like we were skating in quicksand,” said Capitals coach Bruce Boudreau. “Their sense of urgency was so tremendous. They had got called out by [Flames general manager Darryl Sutter] yesterday and had gotten embarrassed pretty well in Boston. So we knew they were going to come out. But we just didn’t meet their push and for the first time in a long time it looked like [Theodore] was struggling a little bit.”

With Semyon Varlamov in net the Capitals didn’t fare much better in their own end. It was 4-0 after the first and the Flames cruised to an easy 5-3 win, handing Washington a rare home loss in regulation.

“We didn’t start the game well,” said Capitals captain Alex Ovechkin. “We knew they would come at us hard. Still, we didn’t give up. In the second and third period we had more chances. It was kind of a tough situation. They’re a team that needs points for the playoffs. We knew they’d come at us hard and we were not ready.”

Which brings us to our second point.

When the horn finally sounded and the first period mercifully came to an end, the home team headed to the locker room while the Verizon Center crowd showed their disapproval with a chorus of boos. We fully admit that the Caps came out flat and looked about as bad as possible in the early stages of this game, but hearing jeers and even mock cheers from Caps fans was definitely a shock to the system.

This team is accomplishing feats no other team in this franchise’s 35-year history has matched and folks were ready to turn their back after a predictable sluggish start? We’re not talking about the Redskins going 4-12 or the Nationals losing another 100 games. We’re talking about a team with a 27-5-4 record at home, which is tops in the NHL.

With a second-period tally, Ovechkin now has 46 goals and 100 points on the season. While Ovechkin has a knack for making the extraordinary look ordinary, reaching 100 points in four of his first five seasons is a big deal. That’s the kind of accomplishment that only elite players with names like Gretzky and Lemieux have achieved.

On the same play, Capitals center Nicklas Backstrom picked up an assist, giving him 90 points on the season. This is noteworthy because Backstrom is now only the sixth player in franchise history to register at least 90 points in a season.

In fact, players up and down the roster are setting personal records for goals, assists and points in a season. But all of that was apparently forgotten because the Caps had a bad first period against a hungrier opponent.

“We’ve been in their position before, where we were a desperate hockey team,” said defenseman Mike Green. “Three years ago we needed to make a push and win every game to get into the playoffs and that’s the same situation they’re in now. When you play desperate hockey, you’re usually successful.”

Green was dead on. For one game, the Flames played as if their season was on the line while the Capitals seemed content to go through the motions for a good chunk of the game. And while Theodore might have had his roughest outing in nearly two months, Green also cautioned that fans shouldn’t rush to judgment on the Caps’ top goaltender.

“I wouldn’t blame this on Jose,” Green said. “Personally, I think we came out really flat and didn’t even give Jose a chance. Sometimes that happens, but by no means was this Jose’s fault. It’s unfortunate that it happened because he’s been playing so well.”

Over the last 10 games the Capitals are just 5-2-3, with all five losses coming from teams who would not qualify for the playoffs if the season ended today. With seven games left, Boudreau has the unenviable task of juggling his lines and finding the right combination to take the Capitals deep into the postseason.

Some lines – like Ovechkin, Backstrom and gritty forward Mike Knuble – are set. Others – like the defensive pairing of Tom Poti and Joe Corvo – probably need to be adjusted. But most importantly, this team needs to be healthy and motivated once the playoffs begin. Regular-season accolades are nice, but this is a team with much bigger goals.

And if there’s one thing fans can work on over the final few weeks, it would be having a little patience. Over an 82 game season it’s impossible for a team to have their best effort every single night.

“Let’s give the guys a break,” Boudreau said. “I could see if we were doing this on a regular basis and the fans have been great to us all year, but it’s been reciprocal. It’s their right, but the good ones were still there for us at the end.”

Sometimes teams fall flat. Sometimes the other team plays harder and deserves to win. It’s okay. There’s no reason to turn your back on this team when they hit a little adversity.