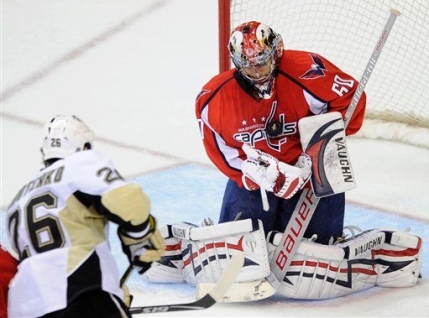 Even though we’re highly superstitious, there’s something you should know about this Washington Capitals team.

They really do have a legitimate shot at re-writing their franchise history this season. They’re capable of achieving something that no other Capitals team has ever done. And no, we’re not going to actually come out and say it – for fear of jinxing them.

This time it was a 4-3 shootout victory with gritty forward Mike Knuble scoring the unlikely winner. Sure, he’d never scored a goal in a shootout in his career, but coach Bruce Boudreau had a hunch. On this night, that was enough.

Anyone familiar with the franchise’s history knows one inevitable truth – if the Caps are going to do the unthinkable this season, they’re going to have to go through the Penguins in the postseason. There’s no way around it. These two teams have to face off at some point in the Stanley Cup playoffs in what professional wrestling refers to as a “loser leaves town match.”

Hockey fans were treated to a sneak preview one year ago when Pittsburgh won the seven-game series in Washington and went on to hoist the Stanley Cup. But this team is vastly different than from even a year ago.

Knuble continues to show his finesse-oriented teammates it’s okay to score ugly goals. Youngsters like Eric Fehr and Tomas Fleischmann continue to grow and take on more responsibilities. New additions like Eric Belanger, Scott Walker and Joe Corvo were brought in for specific reasons to add depth to an already bloated roster, meaning talented players will find themselves on the bench as a healthy scratch if Boudreau isn’t happy with their effort. Nothing gets a hockey player’s attention faster than messing with his playing time.

But there are two keys to a lengthy playoff run for the Capitals – forward Alexander Semin and goalie Jose Theodore. It’s no coincidence that Semin and Theodore were the top two stars in the team’s win yesterday. Mark our words, this team will go as far as that duo takes them.

For a while now, we’ve joked that when it comes to Semin the team has to deal with multiple personalities. There’s “Good Sasha” and “Bad Sasha.” Good Sasha is who stole the puck in his own defensive end, skated the length of the ice and rifled a beautiful wrist shot past Penguins goalie Marc-Andre Fleury for a shorthanded goal to tie the game 2-2 in the third period. Less than two minutes later, the Caps took the lead on a deflection by Fehr and the Caps were back in business.

Bad Sasha is the player who is overly emotional and is prone to take ill-advised penalties in the offensive zone at the worst possible time. He’s the player most likely to send Boudreau to an early grave. He also plays the bongos, but that’s a completely different story.

This team has more firepower than any other team in hockey, but they need Semin to be on his game. Last year against the New York Rangers in the opening round of the playoffs, Semin was the team’s best player. He had five goals and three assists in seven games to lead the Caps past the Rangers and into their second-round matchup with the Penguins.

Unfortunately for Washington, Semin cooled off considerably against the Penguins and went scoreless for the series. The rest, as they say, is history.

Instead of dwelling on the past, look at Theodore’s current body of work. Since early January, Theodore is an astounding 17-0-2 with a 2.42 goals-against average and .927 save percentage. In winning his last seven games, Theodore is sporting a 1.95 goals-against average and a .937 save percentage. That’s called getting it done.

We openly admit that regular season success does not guarantee postseason success, but Theodore has absolutely earned the right to be the go-to guy for the Capitals when the playoffs begin. Throw him in net and rest assured that he, right now, gives this team the best chance to win.

There’s no doubt, Semyon Varlamov and Michal Neuvirth are the future, but the time is now. Put Theodore in net, beg the defensive rotation in front of him to give their goalie a chance by avoiding mental mistakes and the sky is the limit for this team.

The Capitals will inevitably face the Penguins with their season on the line come the postseason. After beating them all three times this season, Boudreau’s boys improve to 6-0-1 against Pittsburgh during the regular season over the last two years. They’ve outscored the Penguins 16-2 in the third period over that span.

Like we said earlier, regular season success doesn’t mean anything in the playoffs. But there is one clear hurdle this team must clear to reach their goal. Wins like this one continue to show that, when everything is clicking, this team truly is capable of something special. These two teams will meet again soon. Here’s hoping Semin and Theodore are up to the challenge.