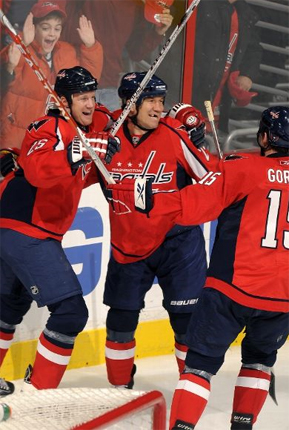 The Redskins, who have been dubbed “offseason champs” pretty much since Daniel Snyder took over the team in 1999, seem more than happy to watch as other teams throw money around in pursuit of big-name free agents.

Meanwhile, the Capitals, the team around town with long-term vision and a front office that actually takes into consideration such trivial aspects of team building such as chemistry and off-ice behavior, made headlines by aggressively pursuing veteran players to add to their already-promising line-up. All this even after Caps general manager George McPhee tried to temper fan expectations in the days leading up to the NHL trade deadline.

After the Capitals’ flurry of activity, four players were added to the roster – forwards Scott Walker and Eric Belanger and defensemen Joe Corvo and Milan Jurcina. None of the four might have name recognition to casual sports fans, but each was brought in for specific reasons.

Walker provides sandpaper and grit. He’s the type of guy who happily throws his body around and does the little things that make a difference in big games. Belanger excels at face-offs and is dependable on the penalty kill. Corvo adds depth to the blueline and gives coach Bruce Boudreau options on the powerplay. Jurcina, who started the season here in Washington, is loved in the locker room and also adds depth to the defensive rotation.

While Jurcina is out for the foreseeable future with a sports hernia, the other three newbies were all instantly thrown into the lineup, if for no other reason than to see how they would respond. Out of the three, Walker was the first to make his presence known to his new team – winning over the Verizon Center by scoring two goals in his debut, while only logging seven and a half minutes of playing time against the Tampa Bay Lightning last week.

You’d be hard pressed to write up a better introduction for a player making his debut in a new city.

“I wasn’t putting too much expectations,” Walker said. “I just wanted to come in and let my teammates and the organization know that I’m on board and I’ll do whatever it takes to help this team win – whether I play seven minutes or 27 minutes. You still have to be willing to do the things that it takes to win.

“If you’re playing a few minutes and you’re not being responsible in your own end, it hurts the team,” he continued. “Scoring goals is a bonus. I’m just trying to work down low, get the puck to the point and go to the net. I just happened to be in the right place and those shots happened to squeak in.”

While most fans will remember the two goals, we were more impressed watching you backcheck Steve Downie, who has a habit of taking cheapshots at Alex Ovechkin. There’s plenty of goal scoring already on this roster. We were happier seeing one of the new guys already jumping in and defending his teammates, even if everyone just met.

“Over the years I’ve learned a few things,” Walker said. “You don’t necessarily have to fight all the time. Sometimes guys on other teams take liberties against your guys and you might not get out there with their lines, so you’re talking to them from the benches. But if you get out there with them, you have to let them know. It’s not a matter of being tough. It’s more like creating a distraction, drawing their focus away from other guys and onto you. You can’t go out of your way to go after them and take penalties, but if you get a chance to finish guys you’ve got to do it.”

Coming from Carolina, you’re obviously familiar with the Capitals. How tough are they to match up against?

“They’re extremely tough because they’ve got such depth,” he said. “Even before the trades, their four lines were so good. They’re so big and so fast. Others players or fans of other teams always hear how skilled they are, but I don’t think people realize how big they are. They’re an extremely big team and that helps because it’s a grind and if you can have that kind of skill and speed at 6-2 or 6-3, it’s really going to make a difference as you wear the other teams down.”

There’s a ton of talent up front now. Has Boudreau or anyone else talked to you about their expectations or gameplan during the rest of the regular season and into the playoffs?

“He talked to all of us together and said we’re all working towards a common goal,” Walker said. “He said we’re probably going to be moving guys in and out of the lineup. It’s not a reflection on whether you’re playing good or bad, it’s just a sign of the depth we have. I think everyone here is mature enough to realize if you want to win, people have to be willing to make sacrifices. Time will tell, but I’m excited to be here and if it’s my turn to sit out, it’s not going to be an issue. I waived my no-trade clause to come here and try to win. That’s the most important thing to me.”

We were treated to an offensive explosion in your debut. What can Caps fans expect from you moving forward?

“I’m going to go out and work hard every night,” he said. “I’m going to do whatever it takes to help this team win. When you’re tired, you just have to put your head down and skate. You can’t just say, ‘Maybe not this shift.’ You have to backcheck. You’ve got to block shots when you can. You’ve got to go to the net and take on some big defensemen in front of their net. Mentally, you’ve just got to be willing to do whatever it takes.”

At 36 and generously listed at 5-10, Walker will never be confused as the biggest dog in the fight. But as you can tell by his comments, Walker is perfectly comfortable with who he is and what he brings to the table. The skill set he possesses isn’t what ends up on SportsCenter, but it’s the type of game playoff teams absolutely need to survive.

He waived his no-trade clause and jokingly offered to pay his own airfare to get to D.C. He’s thrilled to be here and it’s only a matter of time before his teammates and Caps fans fall hard for this scrappy forward as he continues to find ways to impact close games.